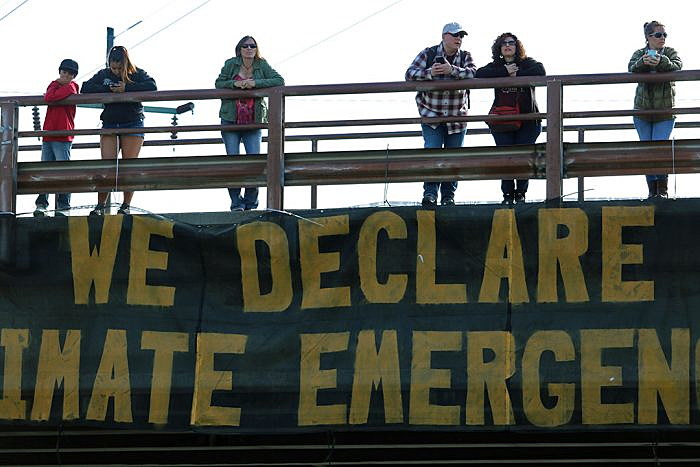 There’s plenty to worry about in this world. One issue, however, looms over all others: climate change.

No matter who you are, what you do, or what you believe, Earth’s warmer temperatures and more chaotic weather patterns are already impacting you. In the U.S. alone, 2021 was the fourth-hottest year on record and produced 20 climate-related events that cost at least $1 billion each—the second-highest number on record (National Oceanic and Atmospheric Administration).

Even worse, despite a small covid-related hiccup, humans continue to pump out ever-higher levels of heat-trapping gases. These gases not only warm the planet directly, they may be unlocking vast reservoirs of Arctic methane that could quickly dwarf all other emission sources. The situation truly calls for a war-like response, both to wean ourselves off of fossil fuels and to help other countries do the same.

There’s just one problem: the party leaders that represent almost half of all Americans refuse to take any meaningful action on this issue.

Republican climate deniers and “fence-sitters” justify their positions by citing things like, “Oh, look how cold it got in eastern Siberia last week” while ignoring the obvious fact that climate change isn’t unfolding uniformly. Instead, it is making global weather patterns more chaotic. For every place that sees a record cold temperature, many others are withering under record or near-record heat—something well-documented both inside and outside of Montana.

The high cost of converting to clean energy is also raised as a reason for inaction, but this excuse is as ridiculous as it is dishonest. How much will it cost to relocate most of Florida’s population because of rising sea levels? What will be the cost of widespread food shortages due to crop failures? How often can we afford to rebuild cities after hurricanes? Even a cursory analysis reveals that vigorous investment now will reap huge savings later—not to mention hugely boosting our economy and, of course, saving most of what we hold dear.

Money, though, is really what climate inaction is all about. Scratch a vocal climate denier, or someone who shouts that unregulated capitalism will solve our climate issues, and you will uncover someone who profits immensely by spreading climate disinformation—whether by being involved in the fossil fuel industry or building up his/her own political power base by misleading gullible followers.

But make no mistake, climate change is perhaps the biggest crisis humanity has ever faced. And as sick as we all are of politics, it won’t help to just bury our heads and mutter “The hell with it.” Who you vote for in every coming election will have a vital impact on how livable Montana and the rest of our planet will be for our children, grandchildren, and all future generations.

The good news is that we have the technology and knowledge to quickly lower our carbon emissions. The bad news? This won’t happen unless we demand a rapid, concerted effort to switch to clean energy and help other countries do the same. No matter which party you have voted for in the past, it is time to make aggressive climate action your election litmus test.

If you encounter a candidate who says things like “well, we still don’t know humans are responsible for climate change” or “we believe hands-off market-driven solutions are the best policy”—or tries to discredit scientists instead of facing the issues—cross him or her off your list. Right here, right now we have candidates who do understand the urgency to act and are prepared to prevent this potentially civilization-ending sequence of events.

Please, check each candidate’s statements and past actions—and vote accordingly.

Montana author Sneed B. Collard III has written more than 85 books for children and adults, including the award-winning Hopping Ahead of Climate Change: Snowshoe Hares, Science, and Survival and Global Warming: A Personal Guide to Causes and Solutions.