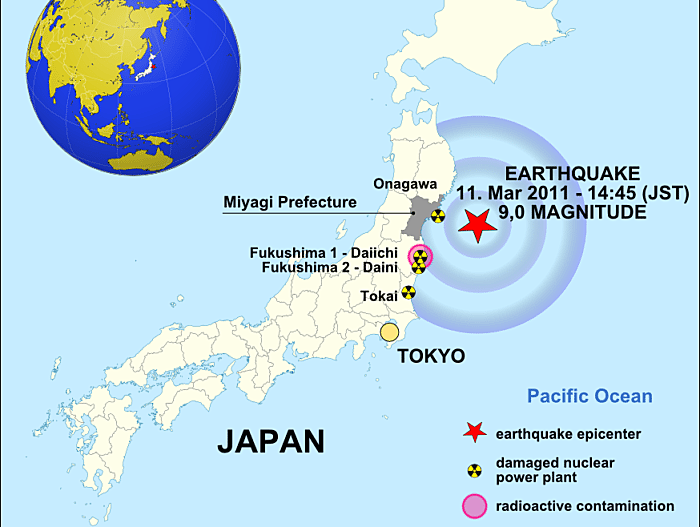 Editor’s note: Each year, Montana Journalism Abroad gives student journalists an opportunity to hone international reporting skills through on-the-ground coverage of a timely issue. This year’s class just returned from Fukushima, Japan, where students wrote about the effects of the nuclear crisis that followed the 2011 earthquake and tsunami. In the coming days, Missoula Current will present the University of Montana students’ work. You can access their complete report online at this site. We begin by going back to the day of the disaster.

It all started on Friday, March 11, 2011 at 2:46 p.m. when an earthquake shook the east coast of Japan. The tremor was the largest earthquake recorded in Japan’s history, measuring 9.0 on the Richter scale. Buildings shuddered, and roads buckled under the stress.

Above the epicenter, about 40 miles out at sea, the earthquake displaced enough water to trigger a tsunami. The water raced toward Japan’s coast, the highest wave towering over 100 feet tall. When the tsunami hit land, waves crashed over buildings, sweeping cars and boats inland like they were toys.

Almost 16,000 people died in the tsunami and earthquake, leaving another 2,500 missing and now presumed dead. The lost lives and devastated communities were a catastrophe by anyone’s measure, but the disaster continued as technological failure at a nuclear power plant triggered a meltdown.

Because earthquakes are common in Japan, all of the country’s nuclear plants are programmed to shut down when sensors detect a large quake. But shutting down a nuclear power plant isn’t as easy as flicking a light switch.

The fuel rods inside the plant still produce heat, and their containment vessels need to be kept cool. Otherwise, the radioactive fuel will melt through the vessels and leak out. Under normal conditions, cold water is continuously pumped in to keep the vessels from overheating.

Nuclear power plants also have seawalls to protect them from tsunamis. In Onagawa, a 46-foot seawall kept the local power plant safe. But further south, the Fukushima Daiichi and Daini power plants’ seawall stood only 19 feet tall. Waves poured over the wall and flooded the plant.

Adding insult to injury, the tsunami also wiped out backup generators that were supposed keep pumping cold water around the nuclear reactors and spent fuel rods. Leftover water around the containment vessels began to boil away. Hydrogen released from the melting fuel rods exploded, damaging the buildings that housed the reactors and launching radioactive particles into the air.

The northwest wind blew the radioactive particles over the Fukushima prefecture, and the Japanese government ordered 85,000 people to evacuate from the red zone — the area hit with the highest levels of nuclear fallout. Fearful of the radiation, another 75,000 citizens living nearby chose to evacuate their homes.

The disaster was a “wakeup call,” said David Slater, a cultural anthropologist at Sophia University in Tokyo. People started to realize that the government and companies like the Tokyo Electric Power Company (TEPCO) weren’t necessarily looking out for them.

“The myth of peace got broken,” said Slater, who has studied the rise of social activism after the disaster. Regular people realized that they needed to take care of themselves and each other and not trust in experts or politicians to have their best interest at heart, he said.

The federal government continued to tell people that the crisis was under control, but help was slow to come and as the nuclear crisis deteriorated, people looking for answers and aid turned to social media and nonprofits seeking both help and ways to help.

“The moment of shock as replaced fairly quickly by a sense of ‘What can we do?’ ” Slater said.

After this industrial disaster, TEPCO, the owner of the Fukushima Daiichi and Daini plants, was required to compensate the nuclear evacuees. However, in Japan, there aren’t any compensation requirements regarding natural disasters, so the earthquake and tsunami victims received nothing.

Now, as the Japanese government finishes restoring areas contaminated by the nuclear fallout, it’s ending compensation for the nuclear evacuees and encouraging those people to return home. But the stigma surrounding radiation is proving harder to remove. And after six years, families have now re-established their lives elsewhere.

With compensation payments stopping, people must choose whether to keep forging a new future or to return home and try to restore the life they once had — their struggle: finding home after fallout.

Next: Compensating a triple disaster.