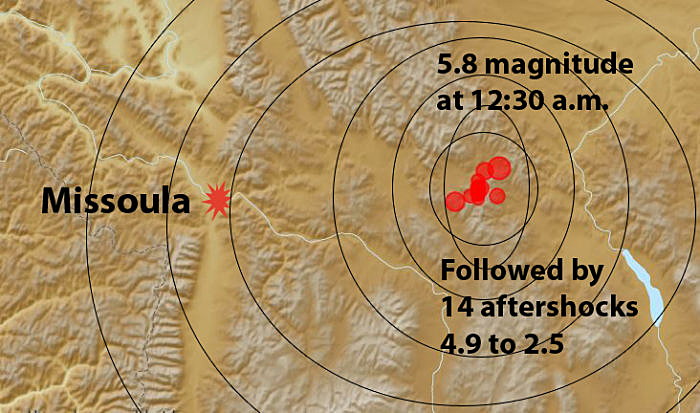 Western Montana woke to the state’s largest earthquake since 1964, when a 5.8 magnitude temblor struck 80 miles east of Missoula at 12:30 a.m. Thursday.

That was followed six minutes later by a second quake, and over the next 18 hours by several lesser aftershocks.

According to the U.S. Geological Survey, the first earthquake struck at a depth of three miles. The second quake had a magnitude of roughly 4.9 and could be heard seconds before it hit.

“I could hear the second one coming for about 8 to 10 seconds before it hit,” one Missoula witness reported. “It was a faint rumble, like a jet taking off in the distance. The house creaked and seemed to sway, and the chimes began to clang.”

“This is a reminder that we live in earthquake country and a significant earthquake could happen at any time,” said Michael Stickney, senior research geologist and director of earthquake studies at the Montana Bureau of Mines and Geology in Butte. “This was the biggest earthquake in Montana since 1964.”

Stickney was still checking his equipment and compiling reports Thursday morning, but said the quake was large by Montana standards, but would be considered moderate globally.

All earthquakes of this size occur on a fault line, Stickney said. Thursday’s temblors were on a blind fault – a fault that is not on any map. It lies nine miles below the surface in the Lincoln area, he said.

Stickney said earthquakes in western Montana normally occur on these blind faults. It’s probably not the first earthquake on this blind fault, he said. The Lincoln area is known for seismic activity.

Western Montana should expect more aftershocks – at least two were felt shortly after the initial quakes Thursday, though there is a possibility for larger aftershocks, Stickney said. Most aftershocks happen soon after main shock, he said, but they become less frequent and less intense as time passes.

There were two small, very minor earthquakes in the past week, according to the USGS, but that’s not unusual for the Lincoln area.

Witnesses from across the region reported feeling the temblors, including residents in Missoula, Bozeman, Helena and Salmon, Idaho. Residents in Lincoln, closest to the epicenter, reported “strong” to “very strong motion.

Thus far, damage reports have been limited to broken glass in Lincoln and Helena, where bottles and glasses fell off shelves in stores, homes and taverns.

The temblors and aftershocks immediately lit up social media with first-person accounts.

“Shook the house and beds,” one witness in Craig reported. “Lasted for about six or seven seconds, but had aftershock that lasted about three seconds.”

“Standing in kitchen and was almost knocked off my feet,” one Miller Creek resident reported. “Have been through many quakes, this one is the hardest hitting one I have felt. Almost violent shaking, house was moving for a good 20 seconds after quake then the second one hit and rocked the house hard a second time.”

“I’m from SoCal where earthquakes are a norm, and this one scared the living daylights out of me,” another Missoula witness on McDonald Avenue reported.

“We are staying at Holiday Inn in Missoula MT on the third floor,” a Missoula visitor reported. “It felt like the bottom floors were being swept from underneath us!”