After a firestorm threw a fright into residents of the Bitterroot and Missoula valleys overnight Friday, the Lolo Peak fire was calmer Saturday, although it continued to burn fiercely in the Carlton Creek and Tie Chute drainages.

Operations section chief Frank Olson said firefighters ignited a number of burnouts on Saturday, both on the mountainsides above Highway 93 South and in the Highway 12 corridor west of Lolo.

In Carlton Creek, where the 30,765-acre fire made a significant run on Friday night, firefighters did additional burning “to stay in front of this finger of fire to prevent it from moving down into more structured areas,” Olson said.

“We have structure protection resources in there to engage the fire if it makes another run, but our burning was done to build a good black edge to prevent the fire from again moving to the east and impacting structures,” he said.

In mid-afternoon Saturday, firefighters reporting very active burning along the ridges of Carlton Creek and Tie Chute. Several air tankers were called in for multiple retardant drops to cool the leading edge of those fires.

Burnout operations were also used to create a blackened zone along Highway 12 from the northeast corner of the fire to Mill Creek, and also on the northeast side in the area of the former Maclay Ranch and its abandoned ski runs.

A firefighter suffered a broken arm working in that area.

In a brief announcement, the fire’s incident command team said the firefighter was hit by a rock and fell near the ski runs on the former Maclay Ranch south of Lolo.

The firefighter suffered a broken arm and was taken by ambulance to Missoula. No additional information was provided.

The Lolo Peak fire earlier took the life of a hot shot firefighter from Southern California. Brent Witham died when he was hit by a snag while working on the fireline in July.

Saturday’s injury followed a night of intense burning and significant growth in multiple directions. Flames could be seen from most of Missoula overnight, and immense pyrocumulus clouds were visible throughout the afternoon and evening as a dry cold front sent the fire on a nearly 8,000-acre run.

Firefighters called much of the fire’s behavior Friday night “extreme.” Photographs taken by those crews and by residents of the Bitterroot and Missoula valleys provided testimony to that fact.

Two homes and several outbuildings burned overnight on Thursday when a burnout operation inadvertently sent flames past control lines and into the area crews were trying to protect.

No structures were lost during Friday’s dramatic runs, and Olson said structure protection crews and engines were in place throughout the fire zone on Saturday.

“We are doing our best to prevent fire from damaging those structures,” he said.

Sunday’s forecast calls for continued winds on the fireline, but of lower speed than in recent days. Relative humidities also are projected to increase as a ridge of high pressure moves into the region.

A community meeting is planned for 7 p.m. Sunday at the Florence Baptist Church, 5561 Old U.S. Highway 93. 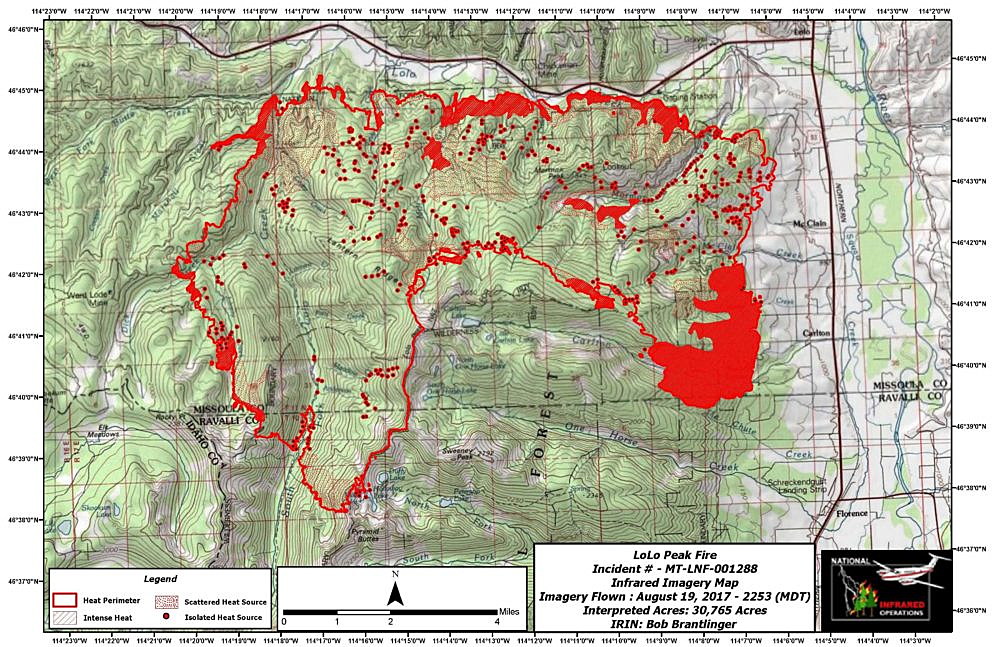