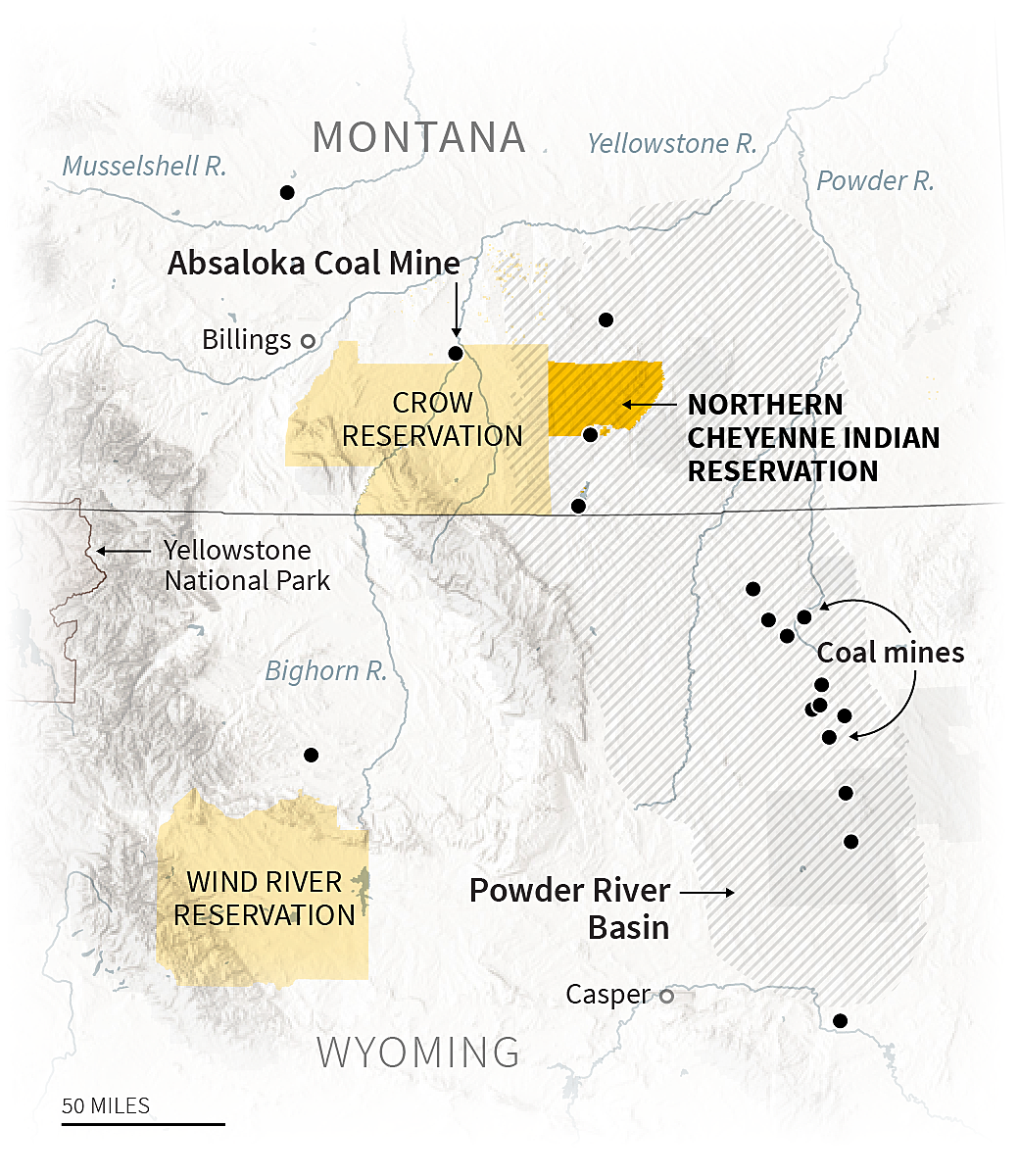 LAME DEER, Montana (Reuters) – U.S. Interior Secretary Ryan Zinke and Vice President Mike Pence took a horseback tour in May of a Montana coal mine belonging to the Crow Nation. They posed for photos with tribal leaders and declared an end to the U.S. government’s “war on coal.”

The trip annoyed leaders of the neighboring Northern Cheyenne – a Native American tribe that chooses not to mine its coal reserves for environmental reasons. Zinke’s department had ignored their requests for a meeting before its March decision to lift a coal-mining moratorium on federal lands, tribal leaders said.

The Crow and Northern Cheyenne live miles apart but stand on opposite sides of U.S. President Donald Trump’s pro-energy agenda. Their differences reflect a broader divide on drilling and mining among America’s 567 federally recognized tribes.

While Native American lands cover 2 percent of the U.S. surface, they have been estimated to contain a fifth of the nation’s remaining petroleum, along with vast coal reserves – making them a key part of Trump’s effort to boost domestic production.

For tribes such as the Crow, Trump’s rise marks an opportunity to tap more of the vast energy reserves beneath their lands for a needed economic boost.

“We have a window now that is short,” said Kenneth Brien, who directs the tribe’s energy development.

For other tribes including the Northern Cheyenne, the administration poses a threat by too forcefully injecting its fossil-fuel agenda into tribal policy while ignoring environmental and social concerns.

The tribe wants more stringent rules to ensure that nearby mines don’t pollute its water supply with waste runoff and that a nearby coal-fired power plant has the proper air pollution controls. It also supported the moratorium on new federal coal leases, instituted last year by President Barack Obama, and a planned study of environmental and social impacts.

Trump aims to streamline regulations that make it much harder to drill on federal and tribal lands than on private land.

The administration also approved the Dakota Access Pipeline in January over protests led by the Standing Rock Sioux tribe. More recently, Zinke recommended reducing the size of the Bears Ears National Monument in Utah – about 1.3 million acres of forests and canyons believed to hold oil but considered sacred by tribes.

Zinke riled tribal leaders in May with remarks questioning the future of Indian lands held in federal trust – an arrangement dating to treaties the U.S. government signed with indigenous tribes in the 1700s.

“As the steward of our Indian trust land, what are we going to be 100 years from now? Is there an off ramp?” Zinke asked at a tribal energy summit in Washington.

After a backlash, the Interior Department affirmed its commitment to tribal sovereignty and said it had no current plans to change the trust relationship.

Gabe Galanda, a lawyer specializing in tribal law, said the administration appears to view energy development as a way to wean tribes off federal support.

Zinke spokeswoman Heather Swift did not directly respond to that assertion, but said: “Building a stronger economy across the board will help all communities and tribes – regardless of whether they are ‘energy’ or not.”

Crow leaders’ mining ambitions have gained them access to Trump’s White House, where Crow Chairman AJ Not Afraid has attended two meetings, most recently in June with leaders of about 10 other energy-producing tribes.

The stakes are high, said Brien, Not Afraid’s energy adviser.

The Crow government is financed largely by revenues from the Absaloka coal mine, which the tribe leases to Westmoreland Resources.

But last August, weak coal prices caused the tribe to cut its share of profits from the mine after the company threatened to close it. The slump caused the Crow administration to slash two-thirds of its workforce late last year, adding to already high unemployment.

A Westmoreland official did not respond to a request for comment.

Crow leaders hope Trump can stoke U.S. demand for coal by easing environmental rules and attract investment by extending the Indian coal tax credit. Federal approval of the West Coast terminal could allow for exports of the Crow’s coal to Asia.

Relaxed regulations could also help convince Cloud Peak Energy to open its planned Big Metal mine on the Crow reservation. The firm paid the tribe $4 million in 2013 for development rights and has until 2018 to exercise the option.

Wearing jeans and a white rancher’s hat, Brien said he remains “bullish” that Trump can revive coal and the Crow economy.

“I don’t want to be that poor again that I will live on deer meat,” he said, referring to a time he had to hunt for his meals.

Sharon Stewart Peregoy, a Crow member and Democratic state representative, said the tribe’s engagement with the administration was driven by desperation.

“We have to ensure that we remain at the table, and that we carve out our own destiny,” she said. “That destiny is for survival.”

The Northern Cheyenne, by contrast, have shunned coal development, and tribal leaders are now seeking to build an alternate economy to ward off double-digit unemployment. The tribe broke ground this summer on an RV park, a casino and a restaurant.

“Our ancestors worked so hard to maintain a pristine area here – and we are surrounded by coal mines, coal generating power plants,” Conrad Fisher, vice president of the tribal council, said in an interview at the tribe’s headquarters in Lame Deer, a brick building with a solar-paneled roof.

The issue remains divisive and complex. Some tribe members continue to push for mining to alleviate poverty. And the tribe has stopped short of directly opposing coal mines operated by the neighboring Crow out of respect for that tribe’s sovereignty – even as it pushes for more government scrutiny of all nearby mining.

The tribe sued the Interior Department in March seeking to restore the coal moratorium on the grounds that Zinke its their request for what’s called a government-to-government consultation between the tribe and the United States.

Zinke said the ban is not needed because mining can be done responsibly, and that the lawsuit didn’t surprise him. “I get sued a lot,” he said in an interview.

An Interior spokesperson declined comment on whether the department ignored the tribe’s meeting requests.

The Northern Cheyenne had anticipated an ally in Zinke, their former Congressman. Now they see an adversary.

“If the energy-producing tribes are who they want to protect,” Elkshoulder said, “they should also understand they have treaty obligations to not just those nations, but to all nations.”