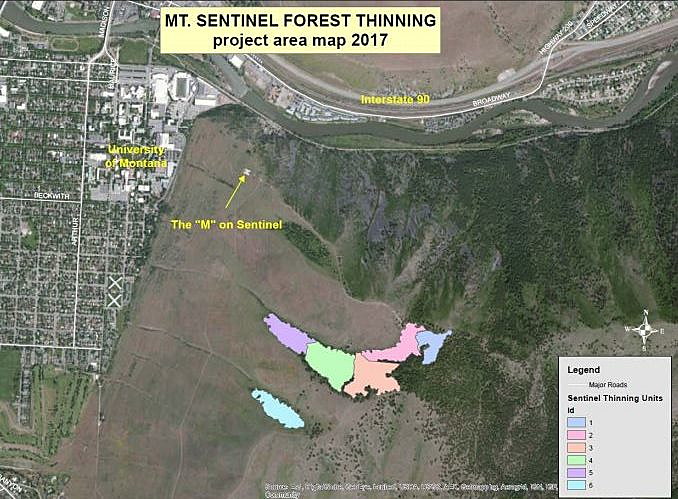 Next spring, the sun will shine where it hasn’t for years on Mount Sentinel.

Contractors on Monday began work to thin the forests on 62 acres atop the Missoula landmark, a project years in the making that’s being funded by a $67,000 grant from the Montana Department of Natural Resources and Conservation.

The city last month awarded two contracts to complete the effort, including $41,000 to Miller Creek Restoration and $17,000 to Watershed Consulting. The work is scheduled for completion by June.

“The problem up there is there’s too many trees from 50-plus years of fire suppression,” said Marilyn Marler, a natural areas specialist for the University of Montana and an outgoing member of the City Council.

“The trees have diseases and the understory plants are crowded out from the shade,” she added. “They’re looking to create a natural stand, so if and when it burns it will kind of behave.”

The area spans property owned by the University of Montana and the city of Missoula and is managed as public conservation land.

Morgan Valliant, the city’s conservation lands manager, said the project won’t pursue timber sales. Rather, he said, it looks to restore the mountain summit to a more natural condition and manage the forest to benefit the summit’s old-growth trees.

The units are currently overstocked due to lack of natural fire, Valliant said, and reducing the competition will promote the property’s larger trees and restore the grasslands.

“This is really intended to open up the forest for plant and animal diversity, as well as tree health,” Valliant said.

Marler added that efforts to find alternative uses for the wood are being explored by the School of Forestry at the University of Montana. That could include biochar or soil amendments.