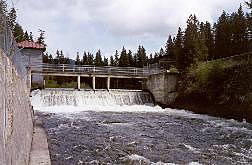 As the new owner of the city’s drinking water system, the city of Missoula partnered with Trout Unlimited this week to begin seeking a firm to conduct an engineering and ecological survey of the lower Rattlesnake Creek Dam as part of a larger mitigation project.

The dam is one of nine perched on tributaries within the Rattlesnake Wilderness and is located roughly 3.5 miles north of the confluence of Rattlesnake Creek and the Clark Fork river in Missoula.

Rob Roberts of Trout Unlimited said the project looks to rehabilitate the stream and floodplain, and promote the passage of aquatic life, including native fish. The work also looks to reduce the cost of the dam’s operation and maintenance.

The lower Rattlesnake Creek Dam was constructed in 1901 and, at the time, it served as the primary water source for Missoula by impounding more than 3 million gallons of water. A concrete dam replaced the wooden dam in 1924.

But in the early 1980s, Roberts said, Rattlesnake Creek became contaminated with giardia, a partial result of the beaver populations in the creek’s middle reaches. That led to a giardia outbreak in the city’s water system.

By 1983, Mountain Water Co. – the system’s former owner – stopped using the Rattlesnake Watershed as the primary water supply. Portions of the dam’s wall collapsed during the 1997 runoff.

Mountain Water maintained the reservoir until June, when the city purchased the utility after a years-long legal battle. Roberts said Trout Unlimited, in partnership with the city, is now looking to evaluate the dams condition and create a long-term mitigation plan.

Project applications are due by Sep. 25.