Montana’s average annual temperatures have increased 2-3 degrees since 1950, and are projected to warm 5.6-9.8 degrees by the end of the century, 32 scientists from the public and private sectors said in the first Montana Climate Assessment, released Wednesday.

The joint UM-MSU Montana Institute on Ecosystems organized the report, which said the state “is projected to continue to warm in all geographic locations, seasons, and under all emission scenarios throughout the 21st century.”

The impacts will be significant.

By mid-century, statewide temperatures are expected to increase by 4.5-6 degrees, depending on the rate at which greenhouse gas emissions continue. Slowing those emissions will slow the rate of temperature increase.

The state-level temperature changes are larger than the average changes projected globally and nationally, the scientists said, adding that they are in “high agreement” and have “robust evidence” of that projection.

Precipitation likely will continue to decrease during the summer months, the assessment notes.

But an increase in precipitation is projected for Montana’s future winters, springs and falls, with the largest increases expected during spring in the southern part of the state.

Along with central Montana, the state’s southern counties are also those with the largest anticipated decreases in summertime precipitation.

The Montana Climate Assessment, by its own definition, is “an effort to synthesize, evaluate and share credible and relevant scientific information about climate change in Montana with the citizens of the state.”

The intent is not political, but rather informational in the interest of recognizing and planning for the changes – all of which are already occurring, the scientists said.

This first assessment is only the start, they said. The effort will be sustained. “We plan to regularly incorporate new scientific information, cover other topics important to the state.”

Included in the first assessment are projected key impacts of climate change on Montana agriculture, forests and water. 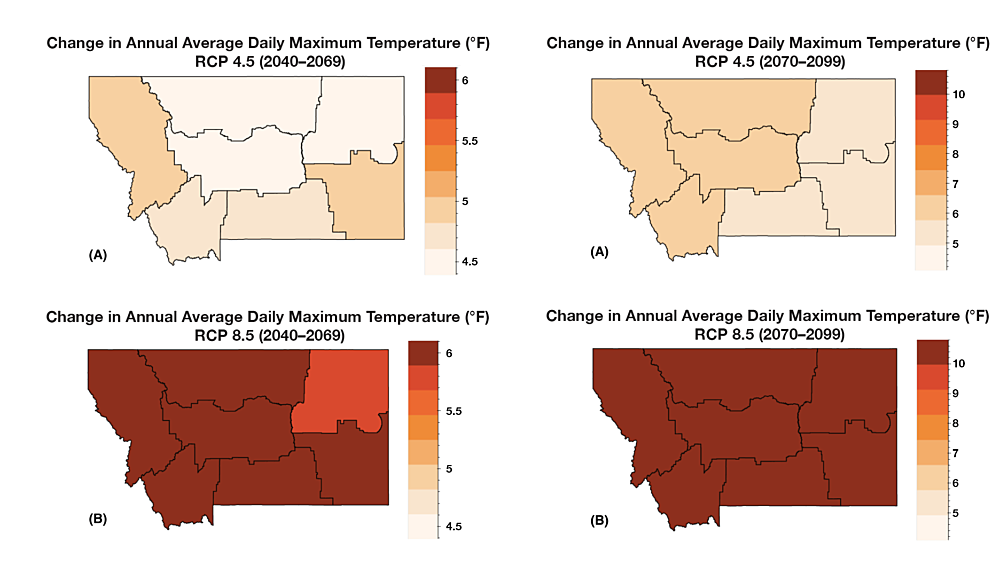 Since 1950, winter and spring months have experienced the most warming, the report concludes, with average temperatures rising 3.9 degrees through 2015.

Montana’s snowpack has declined in the mountains both east and west of the Continental Divide. While the report includes records since the 1930s, the snowpack’s decline has been most pronounced since the 1980s.

In addition, the report says:

Warming temperatures over the next century, especially during spring, are likely to reduce snowpack at mid and low elevations.

“Rising temperatures will exacerbate persistent drought periods that are a natural part of Montana’s climate,” the assessment says. Key messages associated with these findings include:

In their analysis of climate change’s impacts on Montana forests, the scientists emphasized that “the impacts from increased extreme heat will be negative.”

“In the face of changing climate, forest managers can best maintain forest health and stable product yield by understanding past trends and planning for a range of climate scenarios,” they wrote.

The assessment adds: “It is important to note that current forest conditions will largely determine the potential impacts from current and future climate change. Forest conditions vary across land ownership types, and many Montana forests are under stress due to past forest management practices.” 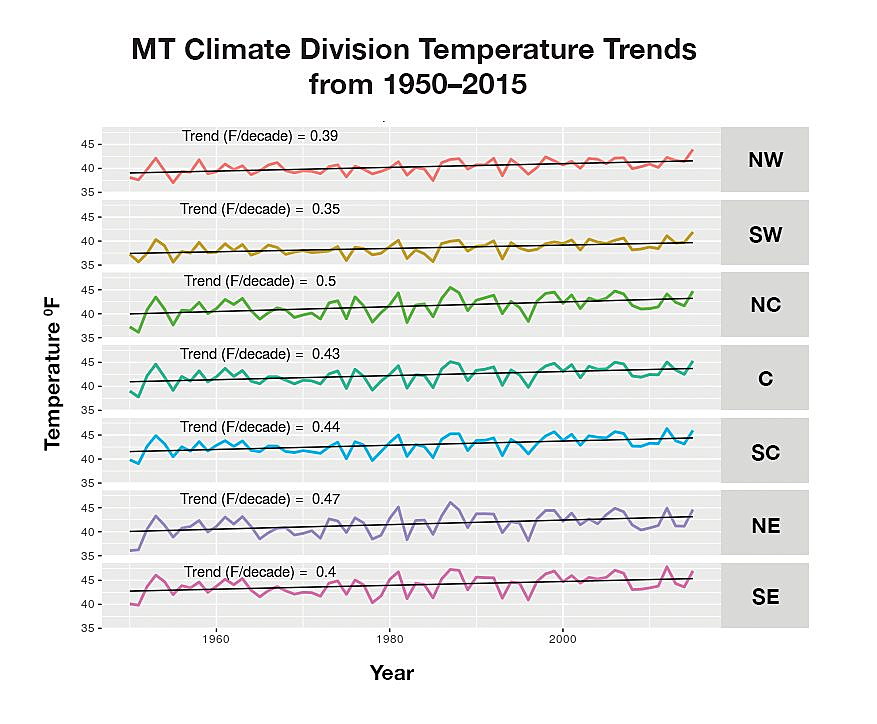 Montana’s $5.2 billion agriculture industry has always been tied to weather events, many of which are extreme, and is similarly tied to climate change, the assessment notes.

“Montana agriculture has always faced volatility, extreme events, and variability across the state and these conditions will continue to be the case with projected climate changes in Montana,” the report says. “Climate model projections show a warmer Montana in the future, with mixed changes in precipitation, more extreme events, and mixed certainty about upcoming drought.”

Among the assessment’s key findings:

“Understanding current climate change and projecting future climate trends is of vital importance, both for our economy and our well-being,” the scientists emphasized.

“The motivation for the MCA arose from citizens and organizations in Montana who have expressed interest in receiving timely and pertinent information about climate change, including information about historical variability, past trends, and projections of future impacts as they relate to topics of economic concern,” they said.

Watch Missoula Current in the days to come with additional reports on and analysis of the Montana Climate Assessment.