They care deeply about Greenough Park and its preservation. But the 26 landowners with inadvertent encroachments into Missoula’s oldest park also know protecting the park’s integrity carries a personal price.

On orders from the Missoula City Council, Parks and Rec employees are working with Greenough Park’s nearest neighbors to eliminate the intrusions that put the city in violation of its agreement with the Greenough family.

In some cases, a fence extends inside the park’s boundaries, or a bit of landscaping. In others, a garage or the corner of a house are not – as previously believed – on private property, but rather in the public park.

The intrusions are particularly problematic because the 1902 deed transferring the land from the Greenough family to the city of Missoula restricts the use of the property to “park purposes.”

In fact, the heirs of Thomas and Tennie Greenough successfully sued the city in 1952, alleging violations of the deed restrictions – most notably, that the city was not maintaining Greenough as parkland in its natural state.

The city and the family settled out of court, with the stipulation listing 13 points for the park’s future management.

Point No. 1: The city had to resurvey Greenough Park “to check and mark boundaries; to show the location of Rattlesnake Creek’s channel and other park features; to pick up any trespasses that have occurred and prevent any additional trespasses.”

When that survey was completed in 2012, city officials had a problem. Twenty-six neighboring properties were encroaching on the park’s boundaries.

The resolution will come one property at a time, beginning in 2018.

Elizabeth Erickson, the city’s open space acquisitions attorney, said all the landowners have been contacted and know their options.

“Our preference is a clean park boundary without any private encroachments,” she said. “So the best option is for landowners to remove and restore any encroachment. That option is open to everybody.”

By removing the encroachment, a landowner removes “any cloud on their title,” their property is restored and the park is made whole once more, Erickson said.

“It’s all in the spirit of protecting Greenough,” she said. “The adjacent landowners care about it and care about its preservation. At the city, we are the trustees tasked with maintaining the park in perpetuity.

“We have to find that balance where we protect the park, fulfill our obligations as trustees but also recognize that Greenough has a unique history.”

Because the park dates to 1902 but there was no boundary survey until 2012, there are instances where the private encroachment is substantial, Erickson said.

“If there is anything actually blocking public access to the park or completely diminishing the public benefit, then that’s a situation where we will not allow them to maintain that encroachment,” she said. “There is one case, for example, where a fence is blocking access, and we are working on that.” 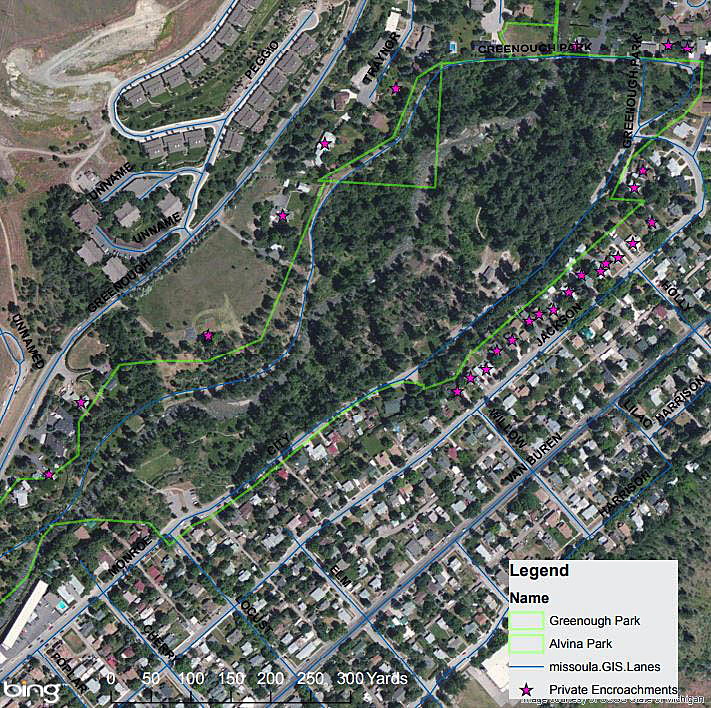 “We need to be consistent and fair because all of Missoula owns the land,” Erickson said. “But we also have to recognize the unique circumstances surrounding the Greenough Park encroachments, such as Greenough Park being Missoula’s oldest park with a unique history and only a recently completed survey.”

So landowners have two additional options that are less desirable to the city: a perpetual easement or a revocable license.

Erickson explained: “An easement is a perpetual interest that allows the landowner to maintain their encroachment only for its current purposes – they cannot expand or change what it’s being used for. If there is landscaping on the encroachment, for example, they cannot put up a fence. They have to maintain the nature and scope of the existing encroachment.”

A property owner could also reduce the size of their encroachment, then negotiate an easement for the smaller remaining intrusion.

Landowners must pay for the easement, as it is a “valuable property interest,” Erickson said. “The easement is attached to the property, and runs with the land if it is sold.”

The final option is a revocable license which gives the property owner continued access to the intrusion for a limited amount of time. Upon title transfer – sale or inheritance of the property – the license will be revoked.

“So the license remains with the current property owner until they sell their house,” Erickson said. “At the time of transfer then, they’ll need to either remove or restore the encroachment.”

While the city has not signed any licenses or easements with Greenough Park-area landowners, the City Council has authorized Parks and Rec staff members to negotiate the agreements and the mayor to sign without council approval.

That go-ahead was key, Erickson said, to allowing Parks and Rec to systematically work with each of the 26 property owners.

As approved by City Council members, the cost of encroachment easements is $10.47/sq. ft., calculated by multiplying that figure by the square footage of each encroachment area, which is variable.

The cost of the revocable license is a flat fee of $894, which is based on the city fee schedule at the time the options were originally offered to landowners in 2014.

Erickson said there has been some frustration among the affected landowners, “but overall people who live near Greenough love the park and understand the city is trying to be a good landowner and trustee but also a good neighbor.”

“The frustration, of course, is that people didn’t know they had an encroachment on their property,” she said. “But these people love Greenough Park more than anybody else. It truly is their backyard, and they take a great deal of pride in the property. We are grateful for their efforts over the years to preserve and protect Greenough Park.”