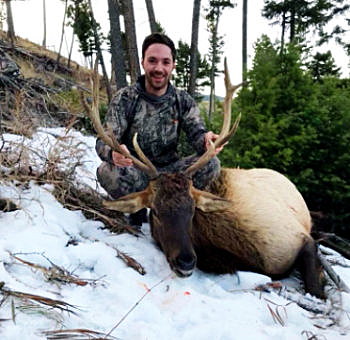 The Montana Chapter of the Backcountry Hunters & Anglers is offering a $1,000 reward for the return of the head of a 5-point bull elk harvested earlier this month by a Missoula hunter.

The head was stolen from the back of 23-year-old Ethan Donaldson’s truck last Sunday while it was parked at his apartment on North Reserve Street.

“I hope that someone comes forward with the information needed to recover Ethan’s elk, and I hope it leads to a conviction,” said John Sullivan, chair of the Montana Chapter of BHA. “This action is disgraceful, and the perpetrators should be absolutely ashamed of themselves.”

BHA on Friday said it is offering a $1,000 reward for information leading the recovery of the elk head and the conviction of the person or persons who stole it. Sullivan said the reward was offered by a private donor.

Donaldson told a local newspaper that he had discovered the head missing on Monday morning. He reported the incident to both Montana Fish, Wildlife and Parks and the Missoula Police Department, which has opened an investigation.

The bull elk was the first he had ever killed.

“I am a proud Montana hunter, and this action is not representative of the hunting community at large,” said Sullivan. “I’d like to personally thank the private donor for the generosity and allowing us to offer this reward for a mighty cause.”

For more information on the reward offered by BHA, visit the organization’s website.