Interior Secretary Ryan Zinke on Tuesday defended President Donald Trump’s decision to dramatically shrink two national monuments, saying the action had nothing to do with energy development and that claims suggesting Trump stole the land were a lie.

Zinke released the final report outlining the recommendations he made to the president and worked to dispel what he described as myths and rumors surrounding the president’s actions.

Among them, he said it was false to suggest that no president has ever downsized a national monument. Zinke said past presidents have reduced monuments at least 18 times, including the Great Sand Dunes National Monument in Colorado and Mount Olympus National Park.

Zinke said it was also false that he and Trump intended to sell or transfer public lands to the states.

“Public lands are for public use and not for special interests,” Zinke said Tuesday. “No land, not one square inch, has been transferred or sold.”

Zinke added that his recommendations and Trump’s decision was not about energy. He also played down accusations by many who suggested on Monday that Trump stole their land by reducing the boundaries of Bears Ears and Grand Staircase-Escalante national monuments.

“The president stole your land,” Patagonia said in a call to action posted on its webpage. “This is the largest elimination of protected land in American history.” 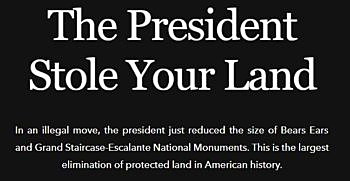 REI made similar but less confrontational claims while many Montanans decried the decision. Zinke called Patagonia’s allegations nefarious and false.

“As I visited the monuments across this country, I met with Americans on all sides of the issue, from ranchers to conservationists to tribal leaders, and found that we agree on wanting to protect our heritage while still allowing public access to public land,” Zinke said. “My recommendations to the president reflect that.”

Zinke said it was also false for opponents of Trump’s decision to suggest that removing a monument designation would expose Native American artifacts to looting and desecration.

Such actions would be illegal, Zinke said.

“The report does not recommend that a single acre of federal land be removed form the federal estate,” the Interior Department said in a news release. “If land no longer falls within a monument boundary, it will continue to be federal land and will be managed by whichever agency managed the land before designation.”

Throughout the course of Zinke’s monument review, Native Americans claimed they’d been left out of the process and not consulted by the secretary. Zinke said that was “partially” false.

Zinke has proposed three new national monuments, including the Badger Two Medicine area of Montana, Camp Nelson in Kentucky and the Medgar Evers Home in Mississippi.