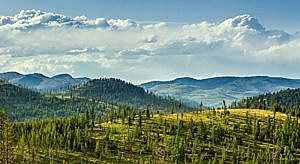 Advocates of a public lands bill are rallying behind Sen. Jon Tester and urging other members of Montana’s congressional delegation to get on board, citing a new public poll that found broad support for the measure.

On Thursday, those who helped craft the Blackfoot Clearwater Stewardship Act joined Tester on a conference call, where they reiterated the bill’s long and winding route to Washington, D.C, and its strong coalition of support, including advocates for timber, wilderness and recreation.

“It’s a perfect example of what happens when Montanans work together,” Tester said. “It’s something elected officials should replicate and honor in Washington, D.C.”

Tester introduced the bill last February and promoted it before the Senate Energy and Natural Resources Committee last month as a “made-in-Montana” solution to the use and management of public lands.

Tester said the support of Sen. Steve Daines and Rep. Greg Gianforte would help push the measure over the finish line, giving advocates in and around Seeley Lake and western Montana a win.

But while the bill was crafted with a grassroots approach that brought diverse interests to the table, the two Republicans have yet to back the measure.

As written, the act supports timber jobs by providing for forest restoration activities, and it adds 79,000 acres of wildlife habitat to the Bob Marshall and Scapegoat wilderness areas. It also opens 2,200 acres to snowmobiling and ensures access to 3,800 acres for mountain biking.

“This bill deals with timber, recreation and wilderness, and it was built over many years,” Tester added. “It’s very well thought out and very well rounded. It’s a bill where everybody gets a little bit, but nobody gets everything they want.”

The measure has won broad public support, according to a poll conducted by Public Policy Polling. Released on Thursday, the poll found that 68 percent of Montanans support the legislation while just 27 percent oppose it.

Support was split across party lines, with 79 percent of Democrats and 63 percent of Republicans supporting the measure. Sixty-three percent of Independents also support the project.

“My most important thing about collaboration is, it has to protect the resource,” said Smoke Elser, a legendary outfitter who helped craft the bill. “Future generations should have the opportunity to make major land management decisions. Our young people are a lot smarter than we are, and they can figure out what the value of that particular piece of land should be, and we should set it aside so they can do that.”

Commissioned by the Montana Wildlife Federation, the poll also found support for the process in which the bill was crafted. Seventy-five percent of respondents said they’d be more likely to support a forest management plan developed through a collaborative local approach.

That finding strikes at a separate bill introduced by Daines and Gianforte, who look to remove more than 700,000 acres of public land from review as potential wilderness.

Critics maintain that input on that bill was reserved for a select group of supporters, including a handful of rural, conservative county governments and user groups who are generally disgruntled over the management of public lands.

According to the survey, however, 85 percent of Montanans disagree with that back-door approach to policy making, and believe it’s important for members of Congress to hold in-person town-hall meetings on public land management issues, something both Daines and Gianforte have been reluctant to do.

“All Montanans know the best way to protect wildlife habitat, access and local economies is for people to sit down at the table and roll up their sleeves,” said Dave Chadwick, executive director of the Montana Wildlife Federation. “Washington is a place in need of a little common ground, and we need proposals like this that are really about delivering what Montanans want.”

While the management of public lands are hotly debated across the West, support for Tester’s stewardship act has strong support on the ground in western Montana, where the measure found its beginning.

Missoula County commissioners last month signed a letter of support for the measure. On Thursday, Chris Stout, superintendent of Seeley Lake Elementary, added that passage of the measure would be a win for his community.

He said his students have taken a front-row seat to the bill’s legislative process.

“What’s really unique about this is, you look at the cast of characters that came together to put this together and everyone wins,” Stout said. “Living in Seeley, some things can be quite controversial, but this seems to be a no-brainer to everyone here and a win-win.”