Meeting that timeline will be a challenge, but there are many significant challenges associated with rebuilding the historic high-elevation dormitory, Mow and others said. 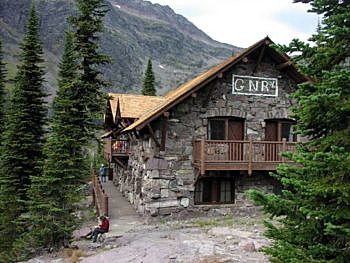 The site is remote – a six-mile trek that will require helicopter shuttles for building materials. The construction season is short, owing to Sperry Chalet’s high elevation and alpine climate.

The previous dormitory sat in an avalanche path and was not built to withstand earthquakes. The site’s water source has diminished in recent years. There are wildlife and wilderness considerations.

And while Montana congressional delegation and Interior Secretary Ryan Zinke have all pledged their support for the chalet’s reconstruction, federal funding is anything but certain, given the gridlock on Capitol Hill.

Mow joined architects from Andersen and Hallas and the staff of the Glacier National Park Conservancy for a public “scoping” meeting conducted face-to-face with park visitors in Columbia Falls and online with 179 others via Facebook Live.

“Would be a wonderful experience to help rebuild such a beautiful place,” said Kathleen Olsen-Saunders of Rutland, Vermont. “Will you need volunteers to help build?”

Added Jodi Hartshaw, “Hopefully, you find a way to bring back the history the fire took.”

Most of the presentation came from Liz Hallas, a principal of Anderson Hallas Architects, which specializes in restoration and rebuilding in the national parks and has considerable experience at high-altitude sites.

Most recently, the firm spent 13 years working on the restoration of Many Glacier Hotel, which was completed in 2017 “and was a real thrill for us,” Hallas said.

The firm has been on the Sperry Chalet project for about two weeks, but is already immersed in the site’s history, complexities and the reality of the destruction that occurred when the Sprague fire overran the site last Aug. 31.

Hallas said her firm will send an engineer whose specialty is masonry to the site this summer to assess the integrity of the walls, which were built in 1913 using stone from the talus slopes just uphill of the chalet.

Even if Sperry’s walls are able to remain in place, a second set of interior walls likely will be built to help the structure withstand seismic activity and avalanches.

Anderson and Hallas has a 25-member team assigned to the project, many of them engineers.

As a starting point, Glacier National Park announced four concepts under consideration for Sperry’s future. Comments on those concepts and other, alternative suggestions will be accepted during a “scoping” process that continues through the first week of April.

About 50 guests could be accommodated at the chalet per night under both options, the same number as before the fire. Another 10 or 11 beds would house the chalet’s staff.

Eighty-six percent of the respondents so far are interested in one of those options – essentially re-creating a very similar experience in a stone-walled dormitory similar to its historic predecessor, Hallas said.

Those watching the session via Facebook Live shared similar sentiments.

“Keeping it as original as allowed would be ideal,” said Dinah Van Krevel-Polzin, of Brookfield, Wisconsin.

“It would be wonderful to recreate the charm of the lace curtains, etc., that were in each room,” said Jori Jones of Martin City.

“Concept 1 is why people climb to Sperry,” said Claire Swenson of Hastings, Minnesota.

Options 3 and 4 have proved less preferable, so far, but that could change as people become more aware of the possibilities, Hallas said.

Both the Columbia Falls and online audiences questioned the advisability of either options 3 or 4, saying both increased the impact on the land and neither preserved the historic features that qualified Sperry as a National Historic District.

“As a historian, it seems that concepts 3 and 4 would add substantial non-contributing features to the National Historic Landmark district, thus greatly altering the district’s historic landscape. Is this not a violation of the spirit, and perhaps the letter, of the federal NHL program?” asked Mark Hufstetler of Bozeman.

“With option 3 would the views from the new building be as good as the original?” asked Chris Colwell, a student at Texas Christian University in Fort Worth, Texas.

“No tents or yurts,” said Claire Swenson of Hastings, Minn. “You can stay in a yurt or a tent without climbing a mountain. In other words, this would be just another campground.”

Others weren’t sold on the need for preservation.

“The fire will become part of its history… its history will never truly go away,” said Kelsey Jacobson of Memphis, Tenn.

Should one of the stay-in-place options be selected, Mow said this summer’s construction work would focus on stabilization of the remaining stone walls “to ensure we have a structure to work with the following summer.”

“Can this summer be one of the construction seasons?” the superintendent asked. “We’ve always been committed to an aggressive schedule.”

To wit: Sperry Chalet burned at about 6 p.m. on Thursday, Aug. 31. By 10 a.m. on Friday, Sept. 1, the board chairman and vice chairman and executive director of the Glacier National Park Conservancy were in Mow’s office, asking how they could help.

That conversation immediately steered toward stabilization of the ruins to allow for the chalet’s eventual reconstruction.

In fact, an attendee at the meeting pledged $30,000 in seed money for the rebuild, Mitchell said. And the conservancy already spent $106,000 to finance last fall’s emergency stabilization work.

“This is our chance not to just watch history, but to be history,” he said.

The key for those who love Sperry Chalet is to be involved in the process, beginning now.

People interested in reading more about the project and who wish to comment should visit
https://parkplanning.nps.gov/sperrychalet2018. The comment period will be open until April 2, 2018.
To get all of the latest news and updates on Sperry Chalet, the Next 100 Years project, join the Glacier Conservancy’s email list here: https://glacier.org/sperry-chalet-interest-list/ .