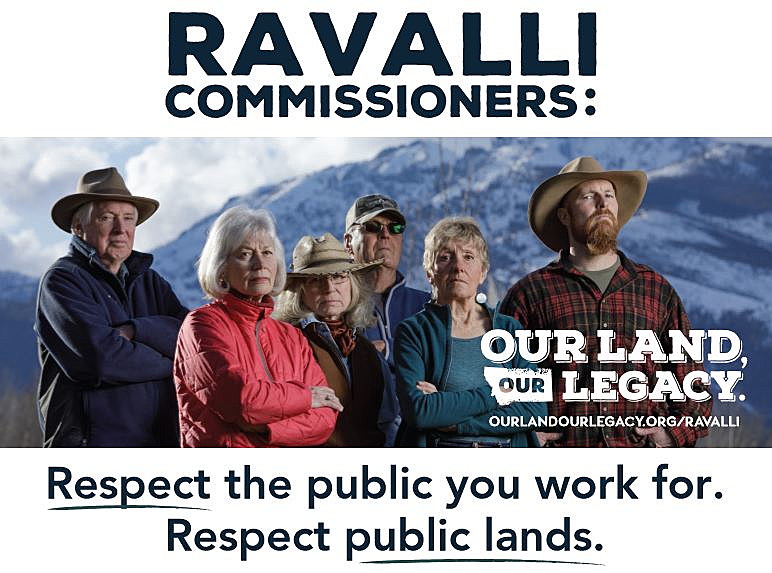 A group of residents is expanding its opposition to Sen. Steve Daines’ push to remove wilderness protection for hundreds of thousands of acres of public land by targeting the Ravalli County commissioners, who backed the withdrawal in a letter of support submitted earlier this year.

In an advertising campaign launched this week, the residents say commissioners “turned a deaf ear” to their concerns by signing the letter, and by ignoring widespread opposition to Daines’ bill in a subsequent public meeting.

“The Ravalli County commissioners sent this letter without first consulting with the people they represent,” said Florence resident Butch Waddill. “When we finally got the opportunity to speak to them directly about the letter and Daines’ bill at a commission meeting in February, they decided to act in defiance of what an overwhelming majority requested they do – rescind that letter.”

Waddill, a retired Marine Corps veteran and former state legislator, is one of several residents behind the new campaign. From yard signs to billboards, their effort asks commissioners to “respect the public” and “respect public lands.”

As written, Daines’ bill would release five Wilderness Study Areas totaling nearly 500,000 acres in Montana from further review as potential wilderness, including the Blue Joint and Sapphire in Ravalli County.

It also looks to lift protections for the Big Snowies near Lewistown, the West Pioneers in southwest Montana, and the Middle Fork Judith in northcentral Montana.

“Ravalli County commissioners have turned a deaf ear to the grave concerns we have about opening up the Blue Joint and Sapphire to industrial development,” said Darby resident Kathy Hundley. “We have a personal stake in the future of public lands in our backyard, and the commissioners are refusing to respect that, leaving us with no choice but to launch this campaign.”

Ravalli County Commissioner Greg Chilcott said he’s seen the billboards and understands the residents’ opposition to the county’s position on the issue. However, he added, every issue has two sides, and the county made its decision with public support.

“Everyone has a constitutional right to make their statement and make them public,” Chilcott said. “But this issue has at least two sides, and we believe the majority of the citizens we were elected to represent are being accurately represented by our position.”

Daines introduced his bill in January, saying he’d received widespread support before doing so. However, opponents of the measure suggest that support came from a handful of special interest groups and rural, conservative counties, including Ravalli.

While Daines said his bill began as a grassroots movement, residents say there were left in the dark and knew nothing of the effort. They contend Daines skirted the pubic process, and suggest that commissioners acted against the public will by backing the measure.

“We’re here to send a message to Daines, Gianforte and to all county commissioners in Montana who have, without consulting their constituents, written letters in support of removing protection from our public lands,” said retired teacher Kay Fulton. “The 800,000 acres in these WSA bills belong to us as much us as they belong to you, and we will, one way or another, have a say in their future management.”

Chilcott defended Daines’ bill, saying it was based upon the recommendations of the U.S. Forest Service, which has deemed the areas in question unsuitable for wilderness designation.

“This bill uses the Forest Service recommendations, and that’s the issue,” Chilcott said. “It’s not about transferring ownership of public lands or limited access. It’s about opening up the access to a broader range of the public to enjoy and utilize.”