The Clark Fork River continued to pour from its banks west of Missoula on Thursday, stranding pets and prompting residents to brace for next week’s forecast, which calls for an accelerated runoff and even higher flood waters.

One resident pumped water from his basement off Tower Street and used a backhoe to pile sandbags against the muddy flow. A neighbor piled household goods into the back of a car, evacuating ahead of what’s likely to come.

“Somebody called in with concern that a dog had been left on the porch,” said Frank Shaske, one of two animal control officers working the flood zone. “It was flooded and they hadn’t seen the owners. The dogs were staying dry on the porch for now, but there was no food or water left for them.”

While Shaske donned hip waiters and carried the dogs to safety – then transported them to the local shelter – Missoula County commissioners finalized an emergency flood proclamation to tap state resources.

The National Weather Service issued its flood warning on April 29, and localized flooding has already impacted several areas of the county. Neighborhoods along the Clark Fork River west of Reserve Street, and areas of Seeley Lake, stand among the impacted zones.

“What that (proclamation) allows us to do is activate the emergency operations center, which has been up and running,” said Chris Lounsbury, the county’s chief operating officer. “It allows the Office of Emergency Management, through the emergency command system, to evacuate areas that need to be, and to close roads and limit citizen access.” 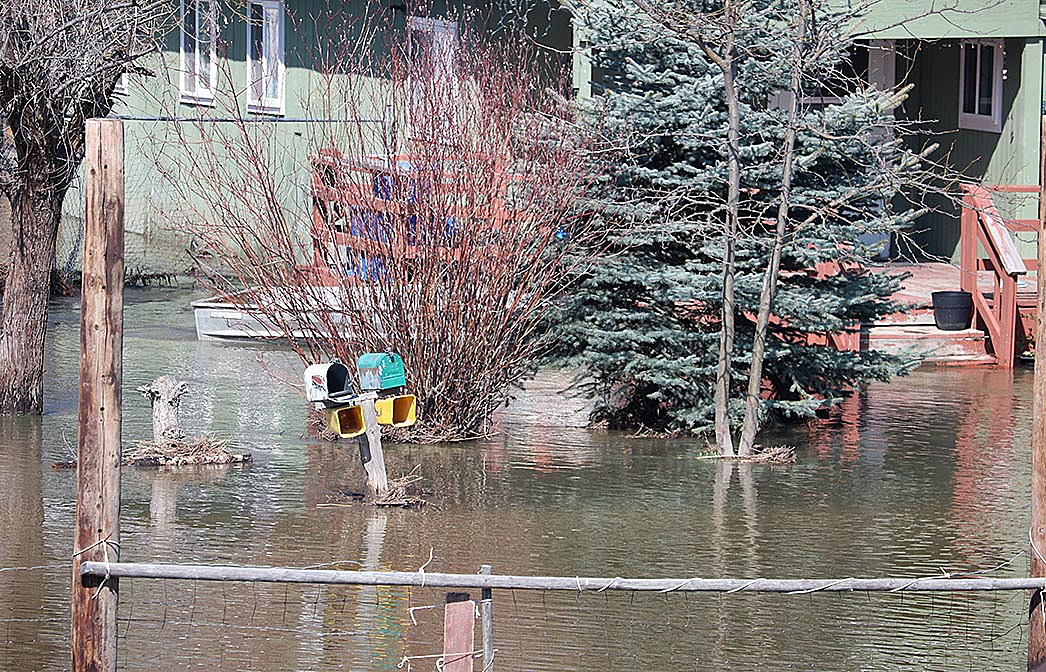 The Clark Fork River above Missoula peaked at roughly 11 feet Monday night, sending floodwaters into low-lying neighborhoods in the Missoula Valley. While it has since subsided to 9.6 feet, it’s expected to surge again next week.

“The river is down right now, but we expect in the next four or five days it’ll be back up, eventually at a higher stage as that snow above 6,000 feet comes off the mountains,” Lounsbury said. “They expect that we’ll get up in the minor, possibly moderate flood stage.”

While the river may have dropped from its Monday crest, floodwaters streamed across several valley streets, which remain closed to traffic. Lounsbury said forecasters are predicting the release of an additional 60 inches of water from the mid-level snowpack next week as temperatures warm into the mid-70s.

“We’re four weeks earlier than we were in 2011,” Lounsbury said. “At this point, if the weather pattern continues, we’ll have melted most of that snow off before June. We’ll see most of May experiencing flood-level stages of rivers, as opposed to June.”

The heavy snowpack and early runoff has also impacted areas of Seeley Lake, including Boy Scout and Placid Lake roads. Area lakes are also filled to the brim, Lounsbury said, limiting their ability to release water.

“They mentioned this morning that all our lakes, like Seeley Lake and all the ones up north, just from the snow below 5,000 feet, are already full,” he said. “The water doesn’t come out of them quick enough so we’ll see more problems up in the Seeley Lake and Swan area.”

The convergence of the Blackfoot and Bitterroot rivers in Missoula could also add to the rising water, funneling runoff from hundreds of square miles through the Missoula Valley. At least two residents stayed at the Red Cross shelter set up at Christ the King Church on Wednesday, and at least one mobile home has been moved.

So far, the flooding hasn’t impacted public infrastructure, other than a few roads, though emergency officials will monitor debris flows as the waters rise again next week.

“The governor’s earlier declaration only covered eastern Montana that was experiencing flooding related to snowmelt on flat areas, primarily around the Musselshell River,” Lounsbury said. “This one is statewide so it’s no longer county specific. That allows the state to begin accumulating costs at the local level and eventually the state level.”