The river, which remains in the moderate flood stage, is expected to cross into the major flood stage on Thursday, racing past the 13-foot mark – the highest level since the 1970s.

“We’re in moderate flooding right now – moderate being a relative term – and looking to go into major flooding on Thursday and Friday,” said Adriane Beck, director of the county’s Office of Emergency Management. “ We’re looking to exceed the 13-foot mark at the Upper Clark Fork River gauge.”

“We utilize these to help us gauge as to when we need to ramp up or ramp down our resources,” Beck said. “Based on the gauge yesterday and based on what we actually saw on the ground, we did make the decision to evacuate a portion of Orchard Homes.”

The Missoula County Sheriff’s Office on Monday issued evacuation notices for several hundred residents living in the low-lying area south of the Clark Fork River. Those warnings turned into evacuation orders on Tuesday.

“In the 24 hours prior to that, even when the water wasn’t that high, we had to rescue two households that became entrapped by moving water and couldn’t get out,” Beck said. “It’s the first time we’ve done a flood rescue.”

With meters now under water, NorthWestern Energy also shut off gas to several homes, as well as power. Power was left on at some residences, though it too could be discontinued.

“We had a good conversation with NorthWestern about leaving the power on at those homes because most of them have active pumps that are running,” Beck said. “At this point, if the power goes off because the water shorts it out, NorthWestern will not re-energize at this time.” 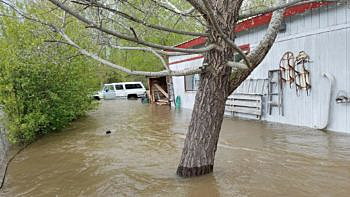 As the waters rose on Wednesday, the Missoula City-County Health Department began pulling a collection of mobile homes now submerged from the river.

Beck said the channel has shifted since 2011, and while the trailers have been eyed for removal for some time, the floodwaters forced the department’s hand. It had contracted tract vehicles to remove the structures from the water.

“We can’t allow these trailers to fall into the river and bounce off Kona Bridge and several other pieces of infrastructure we can’t afford to lose,” she said. “They’re already in water and we’re already considering them destroyed. We’ll try to keep them as intact as possible to prevent anything from going down river that could cause some damage.”

The flood warning will remain in effect at least though May 14, according to the National Weather Service. Missoula County commissioners on Wednesday morning also received calls from Sens. Jon Tester and Steve Daines, both offering support if needed.