The forecast rise of the Clark Fork River continued Friday and is now expected to top 14.1 feet by Saturday, making it the largest Missoula Valley flooding event since 1908.

Brought on by a heavy mountain snowpack, rapid spring warming and a soggy forecast, the rising waters prompted hydrologists with the National Weather Service to up their predictions several times this week, first to 13 feet, then 13.5 feet, and now 14.1 feet.

A week ago, the water was running at 10.5 feet and already causing problems. By late next week, the river is expected to top 14.56 feet, according to the latest predictions.

“I know the river is still going up and they’re still on the edge of their seats, so to speak,” said Lee Silliman, who was staffing the Missoula County flood information office on Friday afternoon. “They’re highly recommending people in the evacuation warning zones to self-evacuate if they feel it’s a good idea.”

While the river was running high last week, which isn’t unusual in the spring, concerns began to emerge midweek as floodwaters spilled into the Orchard Homes area.

That concern intensified into the weekend, prompting the Missoula County Sheriff’s Office to call an unusual press conference on a Sunday afternoon. The next day, deputies began to issue evacuation warnings to roughly 800 addresses near the Clark Fork River west of Reserve Street.

Those warnings turned into evacuation orders for 60 homes on Tuesday and, by Thursday night, orders had been issued to an additional three addresses on Harpers Bridge Road in the Missoula Valley and two addresses on Hamel Road in Frenchtown.

Ten other properties in the valley were also placed under an evacuation warning on Thursday night. Other properties across the wider Missoula Valley could see water rise in irrigation ditches, which are fed by the swollen river. 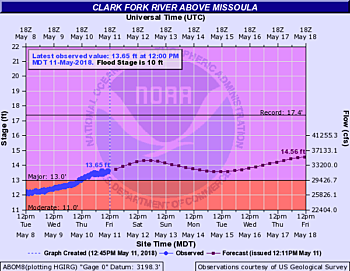 Hydrologists with the National Weather Service on Friday said the river will remain above the 13-foot mark, or major flood stage, into next week.

Flood warnings have also been issued for the Blackfoot and Bitterroot rivers.

“We’re asking the public to remember that this is a dynamic and ever-changing situation,” Silliman said. “Residents around the evacuation areas are advised to make preparations. The crest is still coming, and if evacuation orders are issued, time is limited to leave your residence, so make preparations now.”

The last major flood occurred in 1908. According to local historian Jim Harmon, who makes a habit of poring over old newspapers, that flooding event washed out the Higgins Avenue Bridge, effectively dividing the city of Missoula.

“It was a remarkable thing,” one woman quipped at the time. “I saw station houses, section houses, platforms and dwellings floating down the river.”

On Friday, the floodwaters carried fallen trees and logs down the river, and several mobile homes, once placed on dry ground with a pleasant view of the river, had been chewed up by the current, which ate away the river bank.

Pumps are running around-the-clock in some inundated neighborhoods, through they’re unable to keep pace with the rising current.

“You don’t have to worry if you’re not there, and if you’re there, you’re worried,” said Silliman. “Law enforcement is enforcing the evacuation zones. People are not allowed to go in, and all the road accesses are controlled by law.”

The Missoula Family YMCA, working with Missoula’s Community Organizations Active in Disaster (COAD) group, is offering free services for families and individuals who’ve been evacuated from their homes due to flooding.

Evacuees may register for a free pass at the Missoula YMCA, located at 3000 S. Russell St., during the evacuation period. A valid photo ID is required for all adults at time of registration.