A few more timber projects may move ahead on Montana state forests, even where they are in critical habitat for endangered species, under terms of a new state-federal conservation agreement.

The U.S. Fish and Wildlife Service has released the final draft of an environmental impact statement that allows the Montana Department of Natural Resources and Conservation to manage more than 620,000 acres of state forest in western and central Montana that are also home to several threatened and endangered species.

The document is an amended EIS that adds more than 81,000 acres of state land to a 2011 habitat conservation plan and redefines certain areas to comply with a 2015 court settlement.

“Those are lands that we’ve acquired since 2010, a lot of the checkerboard in the Swan and near Potomac and up Chamberlain out of Ovando. Those were old Plum Creek lands,” said Gary Frank, DNRC Forest Management Bureau deputy chief.

Other additional parcels in this EIS are near St. Regis and in the Bitterroot Mountains, and were part of a trade with the Lolo National Forest.

“We’re managing them the same as our adjacent lands,” Frank said. “So it’s a no-brainer. We just want to bring them all into the fold.”

The DNRC started working with the USFWS in 2003 to create a habitat conservation plan, which details how the state would take precautions during timber operations to reduce negative effects on three species protected under the Endangered Species Act: grizzly bears, Canada lynx, bull trout.

Under the new 50-year forest management plan, the state will minimize the number and use of roads, especially near streams where sediment can be a problem for trout, minimize logging in lynx habitat and avoid situations where bears have access to human food.

In exchange, the USFWS will issue a permit to allow a limited amount of “incidental take,” which is any action that unintentionally kills or negatively affects endangered species.

Research, including a study published in January by Clayton Lamb of the University of Alberta, has shown that more roads mean fewer bears.

“Not only do bears die near roads, bears also avoid these areas, making many habitats with roads through them less effective,” Lamb said. “By closing roads, we can reduce the negative impact of roads in a lot of ways.”

When the USFWS and the DNRC produced a final plan in 2011, but several environmental groups sued, saying the permit failed to include essential protections for bull trout and grizzly bears in some of their only remaining habitat, especially as climate change threatens to degrade forests and streams.

The groups included Friends of the Wild Swan, the Montana Environmental Information Center and the Natural Resources Defense Council.

So a 2015 settlement established “security zones” in those two forests where logging and motorized recreation would be allowed only during the winter months when grizzly bears are hibernating and only in areas below 6,300-feet elevation. Also, no permanent roads could be built.

The new habitat plan set forth in the EIS reflects that agreement. 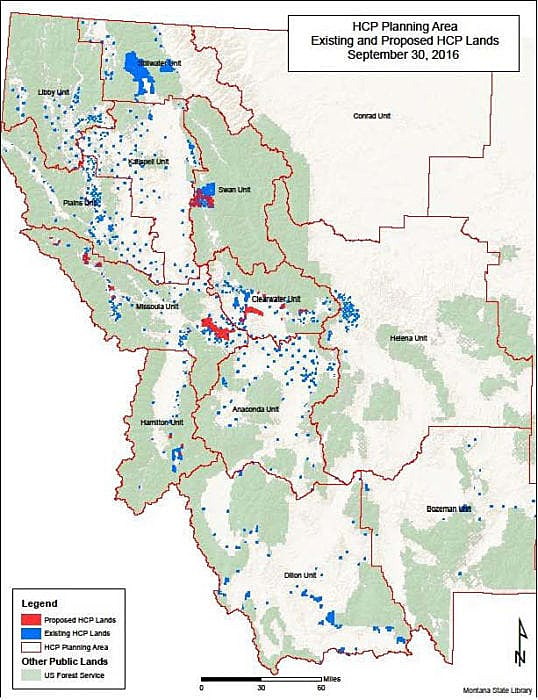 The kicker is that the habitat plan applies to endangered species, but the USFWS is moving forward with delisting grizzly bears in the Northern Continental Divide Ecosystem, which includes the Stillwater and Cold Creek state forests.

The USFWS also has released a draft habitat plan for the Northern Continental Divide, a necessary precursor to delisting that population of grizzlies.

If the bear is delisted in the next couple years, what happens to the portion of the habitat conservation plan that protects grizzly habitat?

Frank said either side could pull out of the plan, but the DNRC wrote it as a 50-year plan and the intent is to maintain the same management for all those years.

“If you read NCDE rationale for delisting, besides the science, one of the premises is our habitat plan,” Frank said. “They’re saying, ‘Hey, there’s this protection out there.’ So the assumption is our HCP will remain in place and provide that level of protection.”

EarthJustice attorney Tim Preso said even if the state were to remove grizzly bears from the conservation plan, it has to manage the Stillwater and Cold Creek forests as defined in the settlement.

The USFWS will allow the public to review the EIS until June 25, at which point their decision will be final unless challenged by those who have already submitted public comments.

Arlene Montgomery of Friends of the Wild Swan hasn’t had time to review the entire 339-page document yet, but said she questions why the road density allowed by the state’s grizzly habitat plan is greater than that allowed in surrounding federal forests.

“(The federal plan) calls for maintaining 2011 levels within the NCDE, but the (state plan) allows an increase in roads. That was a question that I raised and I didn’t see it addressed,” Montgomery said. “That’s not keeping things at 2011 levels.”