When the three Barmeyer sisters were girls, they came across a massive Douglas fir standing beside an old logging road on their Pattee Canyon property – so large it seemed out of place.

The loggers had either missed the old tree or left it standing and the girls, hiking with their parents that Sunday morning, gazed upon it with a sense of awe and wonder.

As the story goes, one of the girls said it was great to own such a large tree. In a lesson to his daughters, their father said they didn’t own it. Rather, he told them, they were simply its temporary custodians.

Now, the Missoula public serves as that tree’s custodian, along with 88 acres of open space land – a gift from the three Barmeyer sisters as a memorial to their parents.

“It seemed like a fitting memorial because this property is so close to the city and so incredibly pristine,” said Barbara Barmeyer, the eldest of the three women. “We hope the public will be as respectful to this land as our family was.”

Several hundred people joined project partners, including REI and Big Sky Brewing, up Pattee Canyon on Sunday afternoon to cut the ribbon and celebrate the opening of the Barmeyer Loop.

As the newest addition to the city’s public lands, the 1.5-mile trail meanders through a wooded flank of the South Hills, emerging on a spur overlooking the Missoula Valley. Mount Dean Stone rises above, abutted to the south by several thousand acres owned by The Nature Conservancy.

“The Barmeyers grew up on this land and they love this land,” said Pelah Hoyt of Five Valleys Land Trust. “It took good care of them and they took good care of it. They also wanted to share this special place with the Missoula community, because the community has been good to them.”

In an agreement forged by Five Valleys in 2016, the Barmeyer family set aside roughly 125 acres of land above Pattee Canyon as a conservation easement. Of that donation, 88 acres were reserved for public use and purchased by the city using $270,000 in Open Space Bond funds.

Other properties could be added to the parcel of open space in the South Hills – an area largely devoid of trails and public access until now, never mind its rolling topography and sweeping views.

“Through the Open Space Bond, we now have over 30,000 acres that have been conserved, voluntarily, through conservation easements by families like the Barmyers,” said Missoula County Commissioner Jean Curtiss. “They’ve given us this gift of a trail, which will allow us to connect to future trails and allow the south side of town to have that kind of access.”

The trailhead, located on the south side of Pattee Canyon Drive, includes a handful of parking spaces constructed and opened last week. The trail itself begins on a series of switchbacks in dense forest near Pattee Creek and passes through an old burn.

By the time the trail reaches the crest of the South Hills Spur, it leaves the dense understory for sun-filled meadows that offer sweeping views of the valley. That journey through different ecosystems, from Western red cedar to pristine red fescue grasslands, makes the trail one of Missoula’s most unique.

“When we’re in the city of Missoula, down on the flats, we look up at this incredible viewshed and we see such gorgeous open spaces,” said City Council member Gwen Jones. “It helps make Missoula such a special place. I think these open spaces are a reflection of our values growing up in the Rocky Mountains of western Montana.” 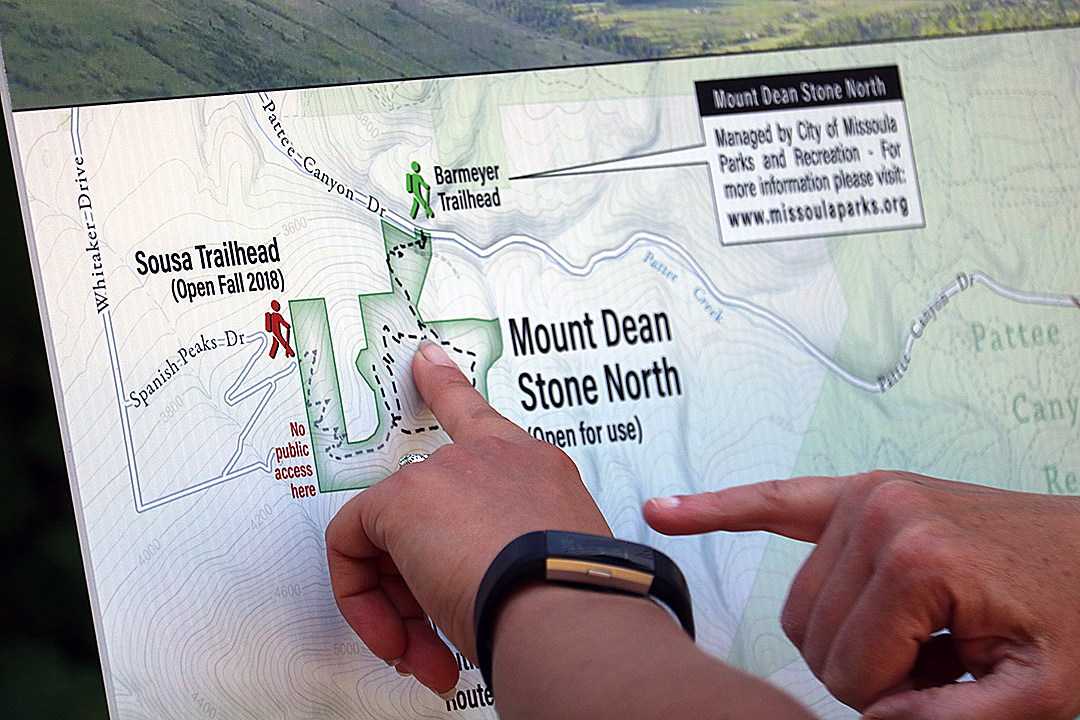 The Barmeyer sisters know this parcel well. They played here as girls, building tepees gathered from sticks and hiding from the cab driver assigned to take them to school.

While their parents left them the land as an inheritance hoping they’d sell it and recover the money, the sisters felt it a better tribute to donate a portion of the property to the public in their parents’ memory.

“(Our mother) instigated and carried to fruition the landmark and historic Pattee Canyon zoning, which has kept Pattee Canyon as undisturbed and as naturally beautiful as it is today,” said Barbara.

Their father, a pediatric doctor in Missoula, also saw his views on conservation evolve.

“In his footsteps, we are all now the custodians of this land,” she added.

The Barmeyer Trail and the South Hills Spur represent a small piece of the larger Mount Dean Stone Project, which looks to preserve 4,200 acres of open space on the city’s southern flank.

When complete, the project – one of the largest open space endeavors in Missoula history – will complete a 180-degree arc of conservation lands around the valley.

“There will be miles and miles of trails for the south side of Missoula and also thousands of acres of land that’s protected, and wonderful wildlife habitat for long-toed salamanders, moose, flammulated owls and all kinds of others,” said Hoyt. “All of that started with this gift from the Barmeyer family.”