Intent on reducing the wildfire danger on Missoula’s fringe, the U.S. Forest Service again plans to thin trees in Pattee Canyon, and one group hopes that adjacent landowners will follow suit.

At the Pattee Canyon campground recently, Missoula District Ranger Jennifer Hensiek and members of the Lolo Restoration Committee co-hosted an open house to inform the public about the proposed Pattee Canyon Maintenance Project, which would treat 1,725 acres of forest within the Pattee Canyon Recreation Area.

Jim Burchfield, Lolo Restoration Committee co-chair, hopes that adjacent landowners will take the opportunity to thin trees on their property too.

So he and various agency representatives talked to the 30 landowners in attendance about the importance of thinning and how they might qualify for the Hazardous Fuels Reduction Fuel Mitigation Grant Program.

The 50:50 cost-share grant sponsored by Bitter Root Resource Conservation and Development helps with the expense of thinning. Since 2000, the program has administered cost-share grants totaling approximately $8 million, according to the RC&D website.

“We’d like to try to dovetail (the project) with adjacent landowners to create a much broader treatment to get the maximum kind of effect,” Burchfield said. 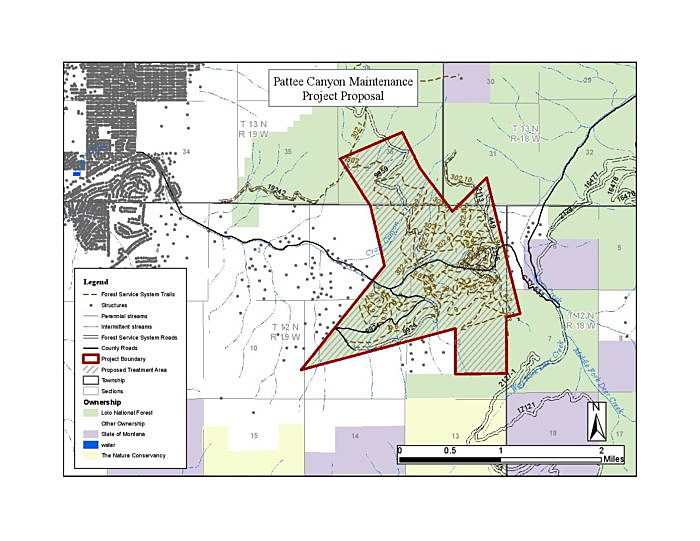 Because most of the land in the canyon is dedicated to recreation, the maintenance project would involve low-impact work, including hand-thinning with chainsaws and girdling of smaller trees, hand-piling and underburning to improve public and firefighter safety in the event of wildfires.

Work on the project will occur between March and November, and roads and trails may be closed temporarily.

With girdling, foresters cut the living bark around the tree to prevent water and nutrients from reaching the needles, killing the tree. Foresters girdle only trees that wouldn’t create safety concerns near trails or roads. The resulting snags can provide habitat for birds and small mammals that depend on dead trees for nesting sites.

Ultimately, the project would also improve conditions for the forest overall, but especially the larger, established larch and ponderosa pine trees in the area.

No commercial thinning is planned on USFS land, however Rich Lane of the Bonner Chip Plant was on hand to talk to private landowners about the possibility of buying their trees.

The project is a follow-up to the 1997 Pattee Blue Ecosystem Restoration Project, which treated much of the Lolo National Forest’s land in Pattee Canyon, although some smaller projects have not been as effective as others.

About 1,000 acres of the recreation area was subsequently treated in 2006.

As climate change promotes warmer, drier conditions, wildfire becomes a greater threat to life and property in the West. Last summer’s wildfires around Lolo and Seeley Lake are prime examples.

While no treatment prevents wildfires, projects on both federal and private land could reduce the intensity of a wildfire in Pattee Canyon, which is at high or very high risk, according to a recent assessment.

The Missoula County Community Wildfire Protection Plan examined the wildfire risk in many of the suburban areas that extend into the wildland-urban interface around Missoula, including Pattee Canyon, Grant Creek and Rattlesnake Creek.

“Hopefully, this will be a harbinger of things to come,” Burchfield said. “If we can get an exemplar neighborhood working together and using these resources and services, maybe the momentum will carry over to other neighborhoods to create a community that is prepared for the inevitable.”

While most projects on federal land require a thorough public process, smaller projects such as the Pattee Canyon thinning qualify for a “categorical exclusion” from environmental analyses under the National Environmental Policy Act.

So the USFS doesn’t need to conduct an environmental analysis, but Hensiek still wants public input on the project during the scoping period, which ends July 16.

For more information, contact Jesse Kurpius at 329-3814 or send comments to comments-northern-lolo-missoula@fs.fed.us. Include the project name in the subject line.