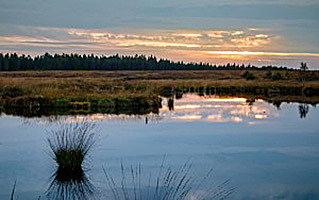 (CN) – The Trump administration unveiled a plan Tuesday to drain federal protections for wetlands and other isolated bodies of water, doing away with the Obama-era Clean Water Rule opposed by farmers.

Andrew Wheeler, acting administrator of the Environmental Protection Agency, joined Interior Secretary Ryan Zinke at a Tuesday press conference to announce a proposal for a new definition of “waters of the U.S.”

Acting EPA Administrator Wheeler said the proposed new rule will give “states and landowners the certainty they need to manage their natural resources and grow local economies.”

“For the first time, we are clearly defining the difference between federally protected waterways and state protected waterways. Our simpler and clearer definition would help landowners understand whether a project on their property will require a federal permit or not, without spending thousands of dollars on engineering and legal professionals,” Wheeler said.

“President Obama’s WOTUS mandate further empowers federal bureaucrats in Washington and threatens our Montana way of life, particularly for our farmers and ranchers,” Gianforte said in a statement Tuesday. “The Trump administration today proposed to roll back federal overreach, clarify the federal government’s jurisdiction, and return power to states and tribes to manage their waters. The EPA’s proposal will reduce uncertainty and help Montana’s farmers and ranchers.”

The new rule, if adopted after a public-comment period, will end federal protection of wetlands that are not adjacent to major bodies of water, and of ditches and streams in which water runs only after rainfalls.

“This is not an Obama rule versus a Trump rule. It does not just go back to 2015, but hits the very core of the Clean Water Act,” Geoff Gisler, a senior attorney with the Southern Environmental Law Center, said in an interview.

The Clean Water Act, enacted in 1972, protects “navigable” waters of the United States from unpermitted discharges that could harm water quality and specifies that permits must beo btained for nonexempt activities that could impact nearby waters.

Language in the law does not define exactly which waters are navigable and therefore protected.

In 2015, the EPA and the Army Corps of Engineers under the administration of former President Barack Obama published the Clean Water Rule to clarify which bodies of water and wetlands are federally protected under the Clean Water Act.

These same agencies, under Donald Trump’s presidency, are calling the 2015 rule a land-grabbing overreach by the federal government because its protections extend to wetlands and other bodies of water that are not adjacent to major ones.

Zippy Duvall, president of the American Farm Bureau Federation, said at Tuesday’s press conference that the 2015 rule is intrusive to the private property rights of farmers who own land with bodies of water.

He praised the Trump administration’s decision to shift the power to protect waters to state and local governments.

“No one in the capitol knows best how to take care of the land than the ones who till it and farm it,” he said.

Representatives of the Farm Bureau from all 50 states attended the press conference in support of the new proposed rule.

Duvall said the process of obtaining permits under section 404 of the Clean Water Act is costly and time consuming, hurting rural farmers in the 22 states where the Obama-era rule still stands.

But Gisler, the Southern Environmental Law Center attorney, pushed back on that assertion.

“Most of the backlash to the Clean Water Rule has been from the Farm Bureau, which is puzzling to us, since ongoing farm activities are exempt from the rule’s permit requirements,” he said. “What we are seeing is that farmers are being used to justify…heavy pollution from corporations.”

Collin O’Mara,president and CEO of the National Wildlife Federation, said in a statement that the proposed rule “will significantly roll back Clean Water Act protections—allowing a few to cut corners while increasing the risks to wildlife and to the drinking water for millions of Americans.”

“At a time when communities from the Great Lakes to the Gulf are facing water crises, we call upon the Administration to listen to the millions of Americans who are demanding stronger clean water protections and rescind this misguided proposal which ignores basic science and makes it easier to damage our streams and wetlands and pollute our drinking water,” O’Mara