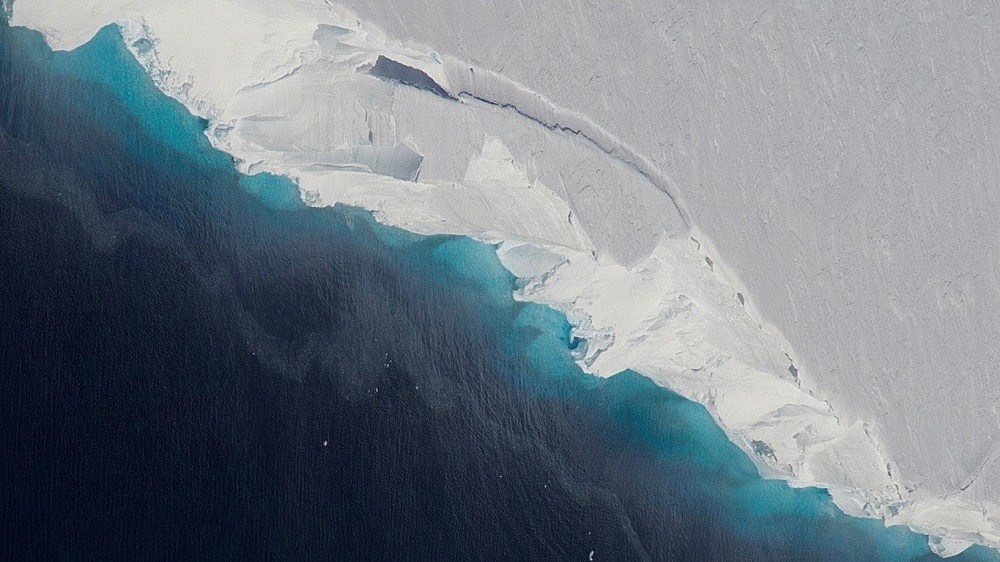 (CN) – Using bleeding edge satellite technology, scientists have gained insight into the status of one of Antarctica’s biggest glaciers – and the results aren’t pretty.

NASA researchers published a study Wednesday showing a gigantic cavity — roughly two-thirds the size of Manhattan and 1,000 feet tall — growing rapidly at the bottom of the Thwaites Glacier in western Antarctica.

“We have suspected for years that Thwaites was not tightly attached to the bedrock beneath it,” Eric Rignot of the University of California, Irvine, and NASA’s Jet Propulsion Laboratory in Pasadena, California, said in a statement.

Rignot co-authored the study, published in Science Advances, that called for further exploration of glacial melting at the earth’s poles and the impacts it could have on sea level rise and other global phenomenon.

Researchers expected to see gaps between the ice and the continental bedrock at the bottom of the glacier, where the ocean is permitted to flow in and melt ice.

But the extent and explosive growth rate of the aperture astonished the researchers. As much as 14 billion gallons of water have melted off, much of which occurred in the past three years.

“[The size of] a cavity under a glacier plays an important role in melting,” the study’s lead author, Pietro Milillo, of the propulsion lab said in a statement. “As more heat and water get under the glacier, it melts faster.”

The researchers used two satellites maintained by Germany and Italy capable of furnishing high-resolution images of changes in ground surfaces.

NASA began tracking such changes in 2010 as part of a project it called Operation IceBridge, which intended to study alterations in the polar regions resulting from climate change.

Researchers compared their data with numerical models and found that the glacier is losing ice at a much faster rate, prompting the scientists to call for further monitoring of polar glaciers and their potential to create rising seas.

The Thwaites Glacier is roughly the size of Florida and is currently responsible for 4 percent of the global sea level rise, according to the study. Along with the Pine Island Glacier, it is part of the “weak underbelly” of the West Antarctic Ice Sheet that scientists interested in tracking changing climate and rising seas closely monitor.

Thwaites alone contains enough water in the form of ice to raise the ocean level by two feet if it melts entirely – but it also serves as a buttress for other glaciers that would push the ocean eight feet higher if they all dissolved.

The study relies on satellite data mostly because glacial loss cannot be monitored from the ground. Instead, researchers use airborne instruments to observe features that change as the glacier melts.

One aspect of a glacier that scientists track closely is a grounding line, which is where a tidewater glacier — or one that flows all the way down to the ocean — begins to float.

Many Antarctic glaciers extend for miles beyond their grounding lines, floating out over the open ocean.

Just as a grounded boat can float again when the weight of its cargo is removed, a glacier that loses ice weight can float over land where it used to stick. When this happens, the grounding line retreats inland. That exposes more of a glacier’s underside to sea water, increasing the likelihood its melt rate will accelerate.

For Thwaites, the grounding line is in retreat – but the ice melt rate is still higher than what one would anticipate, according to the study. The melt is also occurring quicker on the western side of the glacier than on the eastern, for reasons that have not yet been identified.

Scientists hope to get a fuller understanding of the glacier and its melt patterns in the coming years. The U.S. National Science Foundation and British National Environmental Research Council are mounting a five-year field project to answer the most critical questions about its processes and features. The International Thwaites Glacier Collaboration will begin its field experiments in the Southern Hemisphere summer of 2019-20.