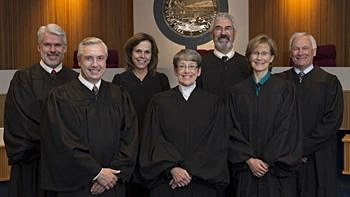 Almost three months after issuing its decision, the state Supreme Court has released its rationale on why the Montana Land Board has no authority over conservation easements.

On Dec. 12, the court had released only a single-page decision so the question could be answered in time to allow two conservation easements to be finalized.

To justify Bullock’s authority, McGrath harkened back to the problem with the original 1889 constitution and why Montanans advocated for a new one in 1972.

In the 1880s, mining interests pushed for statehood so they hurriedly wrote a constitution that favored them and their economic interests. So they watered down the authority of the executive branch by creating a myriad of state agencies and boards that operated fairly independently.

The delegates of the 1972 Constitutional Convention changed that so the state government would operate with checks and balances more like the federal government is supposed to.

They gave executive power back to the governor, saying, “The state’s chief executive will be chief in fact, not in rhetoric.”

For that reason, the Land Board’s March decision to table the Horse Creek easement took away the ability for the governor and FWP director Martha Williams to carry out their constitutional responsibility to the people.

In October, Attorney General Timothy Fox had issued his legal opinion that the land board had the authority, saying that obtaining conservation easements counted as “land acquisition” and therefore Bullock had overstepped when he took action without land board approval.

But McGrath said Fox might be the one who overstepped.

When the delegates of the 1972 convention said the attorney general would be independently elected, they knew it might cause friction in the executive branch. They said, “it is hoped that (the attorney general) office will not be made a policy maker.”

Ultimately, although “land acquisition” isn’t specifically defined with respect to the land board, the rule is that judges should fall back on “its plain and ordinary meaning.” So acquisition of land is not the same as acquisition of the right to use land that doesn’t belong to you.

“Nowhere in the Code does the term generically stand for lesser, non-possessory interest in land,” McGrath wrote.

In her dissent, McKinnon agreed that the governor has ultimate authority according to the constitution. Her objection was that land acquisition “reflects a general concept encompassing the entire spectrum of real property interests,” include buying conservation easements.

One dictionary defines “acquire” as “to gain possession or control of,” and she argued that an easement allows FWP to control certain aspects of someone’s property, because the owners must allow a certain amount of public access. Therefore “land acquisition” isn’t limited to just possessing land, McKinnon said.

“If that were the Legislature’s intent, it would have used a more specific term, such as ‘fee title,’ as it does elsewhere,” McKinnon wrote.