The U.S. Bureau of Land Management is considering the acquisition of up to 13,000 acres of former Nature Conservancy land in the Blackfoot-Clearwater region east of Missoula.

On Tuesday, the Missoula BLM office published an announcement from Interior Sec. David Bernhardt touting the acquisition, which would continue a multi-stage process that began in 2014 when The Nature Conservancy acquired more than 117,000 acres known as the Blackfoot-Clearwater Project from Plum Creek Timber.

The Office of the Interior announcement emphasized the public access provided by the purchase, saying it “dramatically increases access to public lands available for recreational activities such as fishing, hiking, hunting, mountain biking and snowmobiling.”

The Nature Conservancy always allowed public recreation on its lands, including camping, hunting and fishing, as part of its Open Lands policy.

The announcement also said the BLM would support logging projects on the land as part of the Trump administration’s goal of offering 600 million board-feet of timber for sale from DOI-managed land. However, Plum Creek extensively logged much of the land in the past, so most trees are likely to be small.

“The proposed acquisition would allow for balanced uses to continue in this important area, from recreation to active forest management,” said Joseph Balash, Assistant Secretary of the Interior for Land and Minerals Management.

A few miles south of Placid Lake, the 13,000 acres contain the headwaters of Belmont and Burnt creeks, which flow into the Blackfoot River, and are north of 5,500 acres the BLM bought from the Nature Conservancy in 2016. The 2016 purchase added to the land the BLM purchased in 1997, which surrounds the Blackfoot River west of the Lubrecht Experimental Forest.

A 2018 map shows the Nature Conservancy intended more than 40,000 acres in the area to go to the BLM. Adjacent areas would go to the U.S. Forest Service and Blackfoot Community Project lands. The Forest Service is in the early stages of acquiring 29,000 acres.

According to the environmental assessment, published in April but not released until May 24, the acquisition would support Bernhardt’s stated goals of promoting multiple use, job creation and traditional uses such as grazing and access to hunting and fishing.

The BLM would continue to lease out two grazing allotments.

The EA says the acquired lands would be subject to mineral leasing from private entities that own 98 percent of the mineral rights beneath the land. The majority of the oil and gas rights are owned by BP America Production Co., while WRH Nevada Properties LLC owns most of the mining mineral rights.

Alternatively, the EA says the area is critical for conservation because it serves as a connection and buffer zone for wildlife moving in and out of the Bob Marshall Wilderness Complex and between the Clark Fork River drainage and the Garnet Range.

In 2014, the Nature Conservancy stated the Blackfoot Clearwater Project “is an important piece of the conservation puzzle in the Crown of the Continent, which is one of the few places left on Earth where no plant or animal is known to have gone extinct in the last two centuries.”

The area is home to threatened and endangered species, including grizzly bears, lynx and bull trout, along with elk, deer and other species. BLM policy is to protect and conserve sensitive species and their habitats, although that might be difficult if mining operations or oil and gas extraction is allowed. 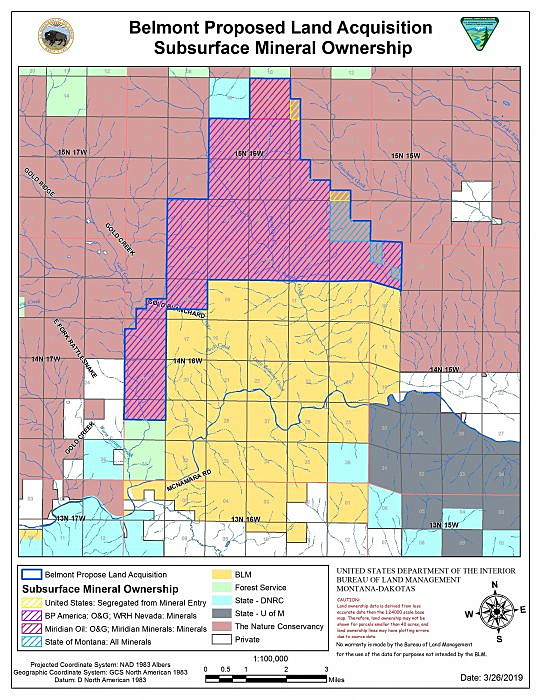 But if the BLM follows the tenets proposed in the draft Missoula BLM Resource Management Plan, released a few weeks ago, it could favor extractive projects over conservation concerns. The agency’s preferred management style has an objective of producing “the greatest quantities of forest products from vegetation restoration activities” and would open more than 20,000 acres to mineral rights.

In his Finding of No Significant Impact, BLM field manager Joe Ashor said acquiring the land would have no effect on wildlife, but it “neither establishes a precedent nor represents a decision in principle about future actions.”

Calls to Missoula BLM office NEPA specialist Maggie Ward and the Nature Conservancy were not returned.

If the BLM finalizes the purchase, the agency would use $3 million of Sportsman’s Access funds, a specialized account of the federal Land and Water Conservation Fund, to buy 4,800 acres by late fall.

For now, there is no schedule for buying the remaining 8,200 acres, and the documents don’t clarify which parcels would be acquired first.