In the light of an August morning, a team of volunteers lifted a piece of corrugated steel and connected it to a homemade zipline before wheeling it down a wooded draw to the creek below.

The rare August humidity made the work intensive and consuming, but despite the heat and risk of failure, smiles prevailed at the close of each stage.

Without such effort, hundreds of cutthroat trout and thousands of fry would continue to perish in an irrigated field just downstream, leaving the lower stretch of Marshall Creek devoid of native fish.

The brawny men doing the work wouldn’t let that happen – not on their watch.

“Normally, we could put something like this together and fly it on a crane, but in this case, there’s no access down through that canopy,” said Steve Houston with Jackson Construction. “You can’t even get at it with a helicopter. So we put the line up on Wednesday to make sure it worked so we didn’t embarrass ourselves in front of everybody.”

Having made a trial run earlier in the week, the work that unfolded early Saturday on Marshall Road went off without a hitch. Seven pieces of fabricated steel tipping the scale at more than 2,000 pounds made it down the steep embankment to the stream below.

There, crews assembled the screen over the irrigation ditch, ensuring that hundreds of spawning cutthroat wouldn’t take a wrong turn. Those that have in the past have died in a nearby field, far from the cold mountain water needed to survive.

“Marshall Creek is a really important spawning stream for cutthroat,” said Rob Roberts of Trout Unlimited. “We know that between 50 and 150 adult fish come out of the Clark Fork River each year and try to spawn up here. It’s a little known fact, and it’s really important to the native fishery.”

Employees with Jackson Construction donated their time by fabricating the hefty screen, installing the zipline and doing the grunt work that involved moving steel down the mountain and putting it together one piece at a time.

All for the sake of the fish.

“The health of these small streams is so important for the health of the big streams and rivers,” said Mark Kuipers, president of the WestSlope Chapter of Trout Unlimited. “The more we can make these tributaries strong, vibrant and healthy – good reproductive systems – the better it’s going to be for the Clark Fork. It’s better for all the wildlife.” 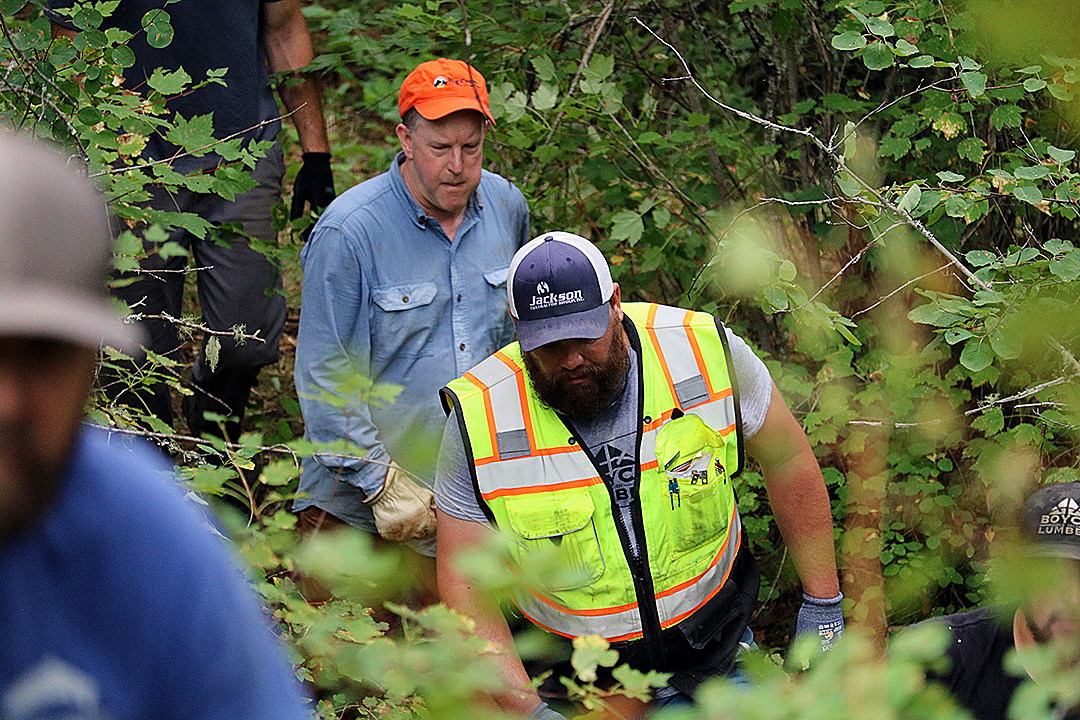 In a time when environmental stories are often bleak – the collapse of this or that species or the grave consequences of climate change – the laborious efforts that went into installing a fish screen over an irrigation ditch may be a story worth telling.

But it’s not the first story of its kind, as Trout Unlimited has been leading such efforts for years. They represent incremental steps to improve the Clark Fork River drainage in the greater Missoula area, from the Blackfoot up north to nearby Rattlesnake Creek.

Still, Kuipers said, there’s more to do to preserve the local fishery.

“Last year, our chapter with Montana Fish, Wildlife and Parks went up to these irrigation ditches in the Lolo Creek area after they were shut off in late September,” said Kuipers. “We found thousands and thousands of trout trapped in these little puddles that were going to dry up. These fish ranged in size from 1- to 2-inch fry to 15-inch fish. With these fish screens, we’re not going to have to do that anymore.”

Trout Unlimited is taking similar efforts on Rattlesnake Creek, where the city of Missoula plans to remove a concrete dam that for years has blocked fish from their native spawning grounds. Further west, restoration work continues on Ninemile Creek and its tributaries after a century of dredging and mining.

The missteps of past generations have altered the natural landscape in a way that has placed wildlife at a disadvantage, native fish included. And where there’s fish, there’s an entire food chain that follows, each species as important as the last.

“You can get way deeper and look at things like Yellowstone Lake, where historically that cutthroat run supported grizzly bears and otters and osprey and eagles and all kinds of stuff,” said Roberts. “Now that it has sort of collapsed because of lake trout, a lot of those species are suffering.”

The cutthroat known to Marshall Creek return each spring to spawn, just as they’ve been doing for ages. And while the Clark Fork struggles under warming temperatures and the occasional algae bloom, the creek runs 15 degrees colder and has the fine gravel bed essential for survival and reproduction.

In addition to the environmental benefits, the work brings pride to those behind it.

“Our strategy is fish passage to increase access to spawning areas, and that’s exactly what this does,” said Kuipers. “This keeps those fry that hatch up here safe and available to grow to adults on the Clark Fork.”