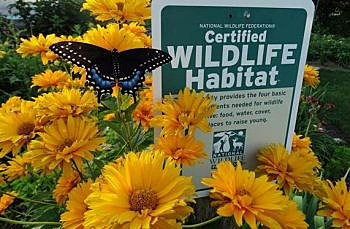 Missoulians can make their backyards more inviting to wildlife if they make a few simple changes. The National Wildlife Federation is recruiting a team of locals to guide those changes.

In the early 1900s, Missoula earned the nickname “The Garden City” because thriving gardens checkered the land that once formed the bottom of Lake Missoula. Then, little by little, the city expanded, swallowing the valuable ground once irrigated by the Clark Fork River.

Houses pushed out the cottonwoods, bitterroot and rabbitbrush, and people replaced them with nonnative Kentucky bluegrass and Norway maples while covering other spots with concrete and asphalt. Rabbits, chipmunks, garter snakes and deer tended to move out to find more natural places.

Recently, development has accelerated, as the remaining open lots are transformed into multi-story apartment buildings and condos. The metal-sided monoliths leave only enough room for isolated strips of grass.

Wildlife still needs to move across the valley, but safe harbors have become few within the grid of city streets.

Now more than ever, Missoula needs to find ways to reclaim its nickname, to make space for wildlife and ensure the city grime doesn’t overwhelm the green.

“If we can continue to keep this connection to nature alive within our communities, we can continue to thrive and be healthy, engage in the outdoors and use the outside to engage with those younger generations while supporting wildlife,” said NWF Americorps worker Claudia Hewston.

Some homeowners are already leading the way, xeriscaping their yards or growing vegetables instead of water-guzzling grass. But more needs to be done if Missoula is to hang onto its certification as Community Wildlife Habitat.

“Missoula was identified as a hot spot – they call it the Garden City for a reason,” Hewston said. “They took it a step further in 2016. The mayor got onboard and NWF approached Parks and Rec and started getting a little more aggressive to earn this Community Wildlife Habitat.”

For any area – neighborhood, city, county – to qualify as Community Wildlife Habitat, it must earn points through NWF’s Garden for Wildlife program. Basically, a certain number of citizens need to make their individual yards wildlife-certified, and various programs need to be offered that engage and educate the community about caring for wildlife and nature.

Backyard wildlife certification doesn’t require a lot, Hewston said, and much of the work can create a prettier yard without the use of chemicals. Planting assortments of native flowers adds color all season long and attracts pollinators like bees and butterflies. Trees and bushes provide cover for animals while providing shade. Little pools or fountains can give birds and animals respite on a hot summer day.

In 2018, Missoula was the first town in Montana to earn enough points to get its certification. It’s also one of only 200 communities nationwide that have met the standard.

But it’s not a one-and-done thing. Missoula needs to keep raising that bar or its certification could lapse.

So last week, Hewston met with eight other Missoulians at the NWF offices downtown to discuss creating a team of citizens that could keep the backyard wildlife ball rolling.

Last year, NWF Americorps worker Andie Conlon helped the city earn its certification by doing a lot of the outreach and education work herself.

“That’s what needed to happen. But now it’s the second year to earn these points, and I thought it was funny that it fell on just one person,” Hewston said. “So I looked at how other communities do this, and they have established Green Teams or Habitat Teams. So I thought we should do that in Missoula.”

Hewston put out the call on Facebook and newsletters for people to bring ideas of the kinds of outreach and education they wanted in Missoula. And even though the first meeting on Dec. 17 was small, the ideas were many although most revolved around native plants and attracting pollinators.

One possibility included a bicycle tour through town that would stop for discussions at various native gardens, including the Montana Natural History Center, gardens at the University of Montana and state Rep. Marilyn Marler’s 8th Street pocket park.