The mountains of western Montana remain fairly “high and dry” in spite of a late September storm that had many thinking it would be a hard winter.

November and December were a disappointment as far as winter in the western half of Montana, with many locations receiving well-below normal to record low precipitation, according to the federal Natural Resources Conservation Service.

“While we got off to a great start early in the year, the major change in weather patterns during November weren’t kind to the western half of the state with regards to precipitation or snowfall,” said Lucas Zukiewicz, NRCS water supply specialist. “While the eastern half of the state received above normal precipitation, the mountains were largely left high and dry.”

A looping jet stream pushed moisture south of western Montana before bringing it back to the eastern half of the state, where precipitation totals are above average.

Fortunately, conditions during the last 10 days of December funneled an “atmospheric river” into northwest Montana, providing abundant moisture along the Canadian border. The few storms that managed to push into western Montana dropped significant amounts of snowfall at mountain locations, keeping basins out of the red.

Even so, the precipitation totals for December in the upper Clark Fork and Bitterroot basins were only 60% to 65% of normal. The Missouri headwaters basin around Helena did the worst, receiving less than half its average December precipitation.

This could present a problem, because in the past western Montana has normally received the bulk of its snowpack between November and February. Climate change could be causing that trend to shift to later in the year. But if it hasn’t, a lot more snow needs to fall in the next two months, and January, with its warm temperatures, hasn’t started off well.

The lower Clark Fork basin northwest of Missoula is suffering with only about 65% of the snowpack water it should have at this time of year. Snowpack totals are the lowest along the Idaho border in the northern Bitterroots. 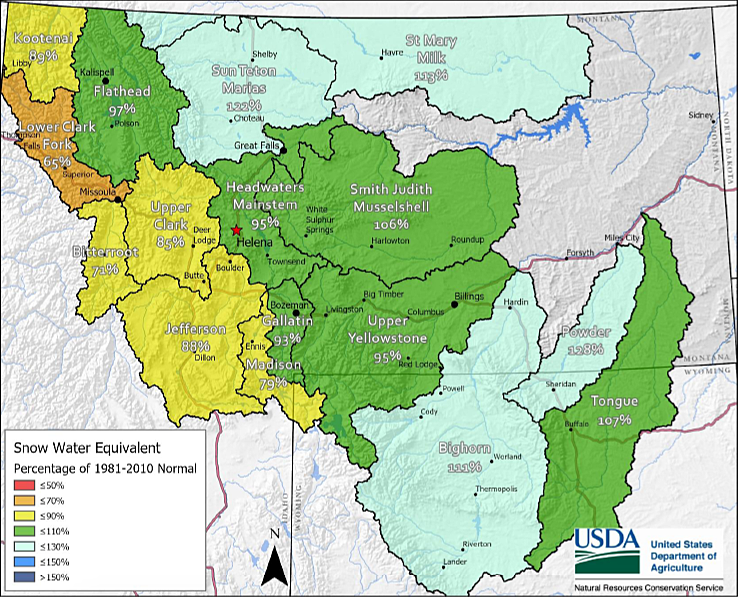 November was unusually dry, and seven SNOTEL sites in the mountains feeding the Lower Clark Fork set new record lows for monthly precipitation. If the trend keeps up, the basin could suffer increased drought this summer, because runoff totals were already below average last summer.

The Bitterroot basin is slightly better with 75% of its normal snowpack, and the upper Clark Fork basin has 85%. Thanks to snow that fell in the Swan and Mission mountains in late December, the Flathead is the most fortunate basin west of the Continental Divide, having received close to average snowpack water.

Last year, western Montana had a similar dry start, but this year has brought even less precipitation. With luck, next month will resemble last February, which brought several storms through the state.

“The January 1 snowpack totals are more like a progress report than a report card. Only 35% to 45% of the seasonal snowpack has typically accumulated at this time, meaning there is plenty of time for snowpack to make improvements by the time the final report card comes out in April,” Zukiewicz said.

“That said, as winter progresses, a close eye will be kept of the basins west of the Divide, where snowpack and water year deficits are the largest.”