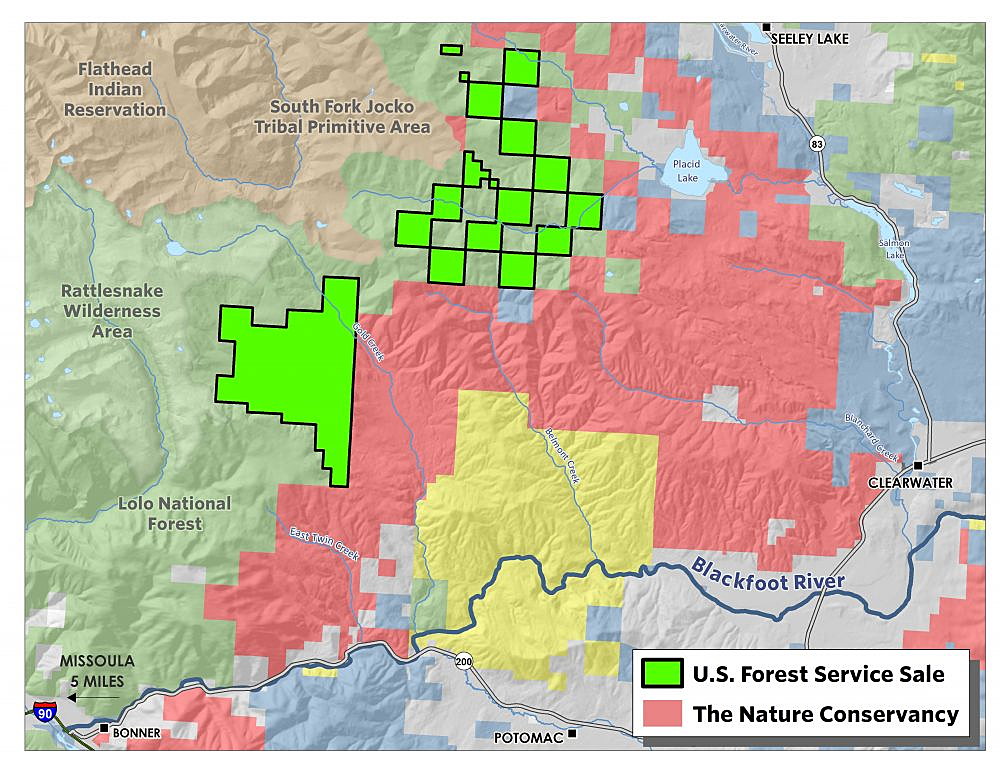 More than 16,000 acres of former timber land north of Missoula will move into the public domain under an agreement announced Monday by The Nature Conservancy and the Lolo National Forest.

Sally Jewell, interim CEO of The Nature Conservancy, said the sale includes a portion of land acquired from the Plum Creek Timber Co. in 2015.

“This project has been a blueprint for achieving conservation at a meaningful scale and would not have been possible without collaborative partnerships, forged over many years, among private landowners, community organizations such as the Blackfoot Challenge, and state and federal agencies,” Jewell said.

Located west of Seeley Lake and north of Missoula on the Lolo National Forest, the land previously resembled the checkerboard pattern of public-private ownership dating back more than a century. Such ownership patterns made land management difficult.

Over the last three decades, however, TNC has purchased more than 500,000 acres from Plum Creek, with the goal of conserving rivers, wildlife and forests, along with public access.

Incrementally, Jewell said, TNC has been selling the land back into the public domain for management by the Missoula and Seeley Lake ranger districts on the Lolo National Forest. The result has helped create a contiguous area of publicly owned land.

The latest announcement follows another recent sale of nearby land to the Bureau of Land Management, resulting in a combined total of 23,700 acres.

“Thanks to dedicated and visionary partners, the first phase of this project is complete,” said Carolyn Upton, supervisor of the Lolo National Forest. “The Lolo National Forest is looking forward to stewarding these acres, which will contribute to the continuity of wildlife habitat and recreational access for the public in perpetuity.”

Among other things, the acquisition and sale secures public access to the east side of the Rattlesnake Wilderness and associated Rattlesnake National Recreation Area, while connecting developed recreation at Placid Lake and the Clearwater River corridor.

“Not only does this conservation project secure long-term public access for hunters, anglers, hikers and others, but the scale to which management of wildlife habitat can take place is exceptional,” said Jennifer Doherty, director of public lands for the Rocky Mountain Elk Foundation.

Jewell said the acquisition represents the first of two phase. The second half of the project is expected to conclude later this year, adding additional acreage to the public land base on the Lolo National Forest.

The sale represents a longstanding public-private partnership that looks to eliminate the ownership patterns that made land management challenging.