Packing the trails during the pandemic? Then please pack it out – and social distance 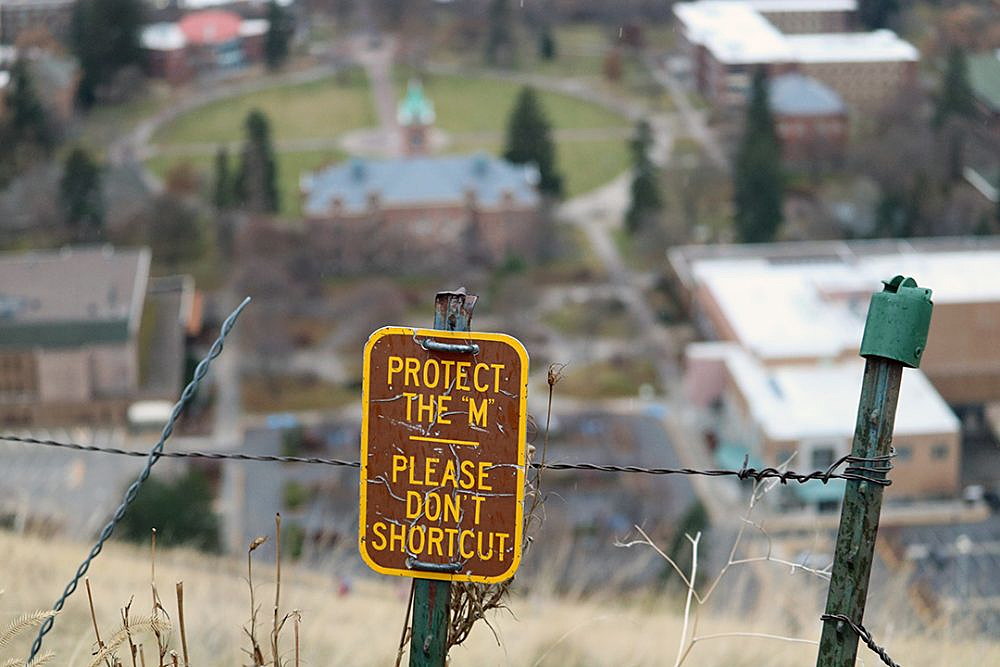 During times of uncertainty, Missoulians may have it better than some because they have nice places to escape to, even in town. That’s especially important now, with the COVID-19 pandemic.

For the past two and a half weeks since Gov. Steve Bullock ordered Montanans to shelter-in-place as much as possible, Missoulians have flocked to city trails and surrounding open space to escape the confines of their houses and breathe some fresh air.

With more people working from home and others regrettably on furlough, people have more time to spend outdoors, especially when they can’t hang out in breweries, coffee shops or movie theaters. That produces more people pressure in the pretty places.

On nice days, the Kim Williams Trail has looked like some California boardwalks, with hundreds of people walking, biking and skateboarding along the Clark Fork River as families play Frisbee and picnic in the grassy spots.

Farther out, the parking lots of Blue Mountain and Waterworks Hill have occasionally filled to the brim, causing people to park farther down the road before walking to the trailheads.

All this activity can help people regain some sanity, but sometimes it’s not so sanitary.

Missoula City Parks superintendent David Selvage said he’s usually ramping up his crew of seasonal workers in April to focus on planting and organic debris cleanup. But this year, Selvage has refocused workers’ efforts on sanitation for the time being, although they aren’t cleaning out toilets yet. All public restrooms remain closed to inhibit disease transmission.

“It’s a bit early. Usually we don’t see this level of trash this time of year,” Selvage said. “But it’s a good time to use the park system.”

To help keep public areas clean, the city has posted signs on trashcans and kiosks along the trails, asking people to “pack it in, pack it out.” When you finish drinking that can of pop, best to stick it in your pocket or backpack and take it home. City workers are still doing daily and weekly runs, but the less they have to contend with, the better.

Unfortunately, city workers have seen people dumping larger amounts of trash, sometimes in trashcans and sometimes not. Selvage said it could be people who are passing through or having to live in their cars.

“We’re keeping up on it reasonably well. I’ve had reports that other spots outside the city limits are struggling – fishing access sites, truck stops, places like that have seen a bit more trash piled up,” Selvage said.

Empty beer cans and plastic bags and bottles end up dotting the banks of the Clark Fork River too. In a normal spring, volunteers would have picked up much of that during the annual Clark Fork River Cleanup. That was scheduled for this weekend, but the Clark Fork Coalition has postponed it due to COVID-19.

In the meantime, they’re encouraging people to pick up trash on their own, take a selfie and send it to the Clark Fork Coalition.

The folks at Five Valleys Land Trust love that everyone is taking advantage of all the open space in and around Missoula. But they want to remind people to practice good social distancing and keep places clean so the areas can remain open to all. If areas become too crowded or people don’t keep a safe distance, they could be shut down like the National Bison Range, which saw too many people packing onto a few short trails.

That’s why FVLT employees are posting reminders to hike 6 feet apart at local trailheads including the Barmeyer and South Hills trails and some Forest Service and Nature Conservancy trails. Remember, too, that upper parts of the Mount Dean Stone Trail are still closed and posted as such until the trail is properly constructed, said FVLT lands director Pelah Hoyt.

FVLT conservation project manager Vicky Edwards said the first few weeks saw people more concentrated on trails in or close to town, but she’s heard people saying they’re trying to spread it out a little more by hiking at different times or going to other places.

To take some of the pressure off city trails, people might want to take a 20-minute trip east to explore the FVLT Confluence property along the Clark Fork River at the mouth of Rock Creek, although no porta-potty is available at this time. Once the snow melts more, the Marshall Mountain open space will provide some more opportunity.

“I think people are trying spread it out to be as responsible as they can. We recognize the importance of all of us getting outside and accessing our open spaces to connect with nature right now,” Edwards said. “But packing it in, packing it out is even more important. At Blue Mountain, I’ve been there multiple times and have seen the accumulation of even pet waste bags that are being left at the trailheads. It’s important for our own human health and safety to pack it out.”