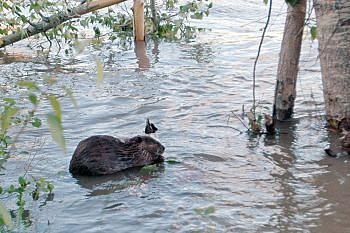 Council Grove State Park is getting a lot more attention these days, not only from locals with cabin fever, but also from beavers. So managers are trying to get both to use the area a little better.

Last week, Elissa Chott, beaver conflict resolution field technician with the Clark Fork Coalition, waded through a backwater area of Council Grove State Park along the Clark Fork River to figure out how to keep beavers from damming a couple culverts.

Even though one of the culverts is large – the oblong culvert has a 7-foot width, while 11 feet across the water, the other is 3 feet across – beavers can easily drag enough sticks and debris over to plug the pipes as if they were damming a stream.

The problem is a nearby road could become flooded if the culverts are dammed and the water rises to more than about 8 feet. With the spring runoff underway, managers don’t want that, but they also don’t necessarily want to kill the beavers.

But Chott has a solution.

They installed a few different tools that are used to foil beavers’ usual tendency to plug leaks in their ponds.

When beavers hear the sound or feel the pull of water running out of their pond, they find the spot and deal with the leak. If people don’t mind having a beaver pond but worry about flooding, they can install a pond leveler. They can sink one end of a long plastic pipe in the bottom of the pond surrounded by a large cage, so the beavers can’t get to the pipe and they don’t feel the pull of the water leaving. Then the other end of the pipe runs up through the beaver dam at the height where people want the pond to remain.

If the water level gets higher, pressure will push water out through the pipe.

But with culverts or headgates, people don’t want ponds and don’t want the openings dammed. So at a culvert in Lost Creek State Park and at a headgate on the Alvi Beck irrigation ditch on private land nearby, workers pulled out all the debris and built a fenced enclosure around the opening.

As long as the enclosure is built far enough from the culvert or headgate, the beavers don’t feel the pull of the water rushing through and they don’t have the urge to dam it. In other areas, workers wrapped trees with wire to prevent beavers from cutting them down.

Chott said she went to check on the Alvi Beck headgate a few weeks ago.

“So far so good – they haven’t been back to dam on it,” Chott said Thursday during an online presentation.

Using what she’s learned, Chott plans to keep beavers from blocking the culverts at Council Grove State Park by installing a fenced enclosure that’s big enough to encompass both culverts and span the 11 feet between. Then she’ll create a wildlife passage that forces beavers, muskrats and other species to go around the fence.

But they’ll still have access points near the culverts so they can move up or downstream.

Chott hopes to have the whole thing installed in the next month or so. In the meantime, she continues to reach out to landowners along the Clark Fork River to find where beavers are and provide help if landowners are having issues with beavers.

“It depends if we can design a device that can meet their needs or if not, maybe there needs to be an alternative,” Chott said. “Depending on the site – because you have to design each device for the site – sometimes, they don’t work. So those other management options like trapping might have to be implemented.”

The organizations and FWP do all this work in order to encourage beavers to do the beneficial work they do without inhibiting the work that people want to do.

Beavers help keep water around by creating ponds, which can help recharge the groundwater, and wetlands, which are critical for certain wildlife species. The groundwater that settles below a beaver pond can be 5 to 10 times what you see on the surface, Chott said.

And as climate change brings more heat and drought, keeping more water in the watershed for a longer period of time can offset the effects of a dwindling snowpack.

“Having beavers on the landscape where they’re appropriate, and especially in the headwaters where they can do massive amounts of water storage, is going to be really important,” Chott said.