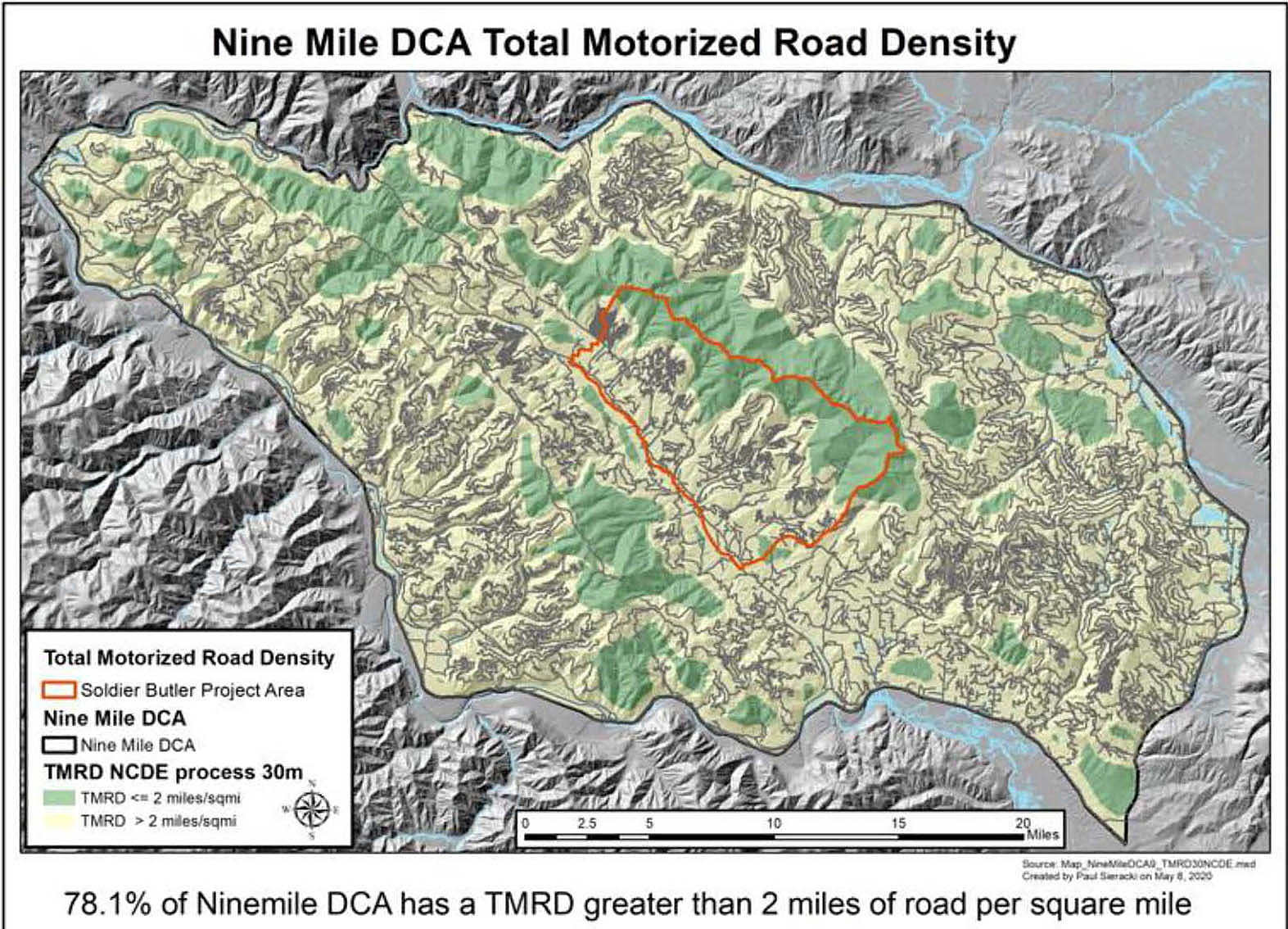 The additional roads proposed for a Forest Service project do nothing to improve grizzly bear habitat and connectivity in the Ninemile basin, according to an independent report.

On Thursday, the Flathead-Lolo-Bitterroot Citizen Task Force released its study of the existing and proposed roads in the Soldier Butler Project, recently finalized by the Lolo National Forest. Based on its own analysis, the group says the Lolo National Forest underestimated the effect of adding more roads to provide access to the logging sites.

Lolo Forest Supervisor Caroline Upton said in her April 17 decision that the project is intended to reduce wildfire risk. The Forest Service plans to burn and thin about 10,000 acres and harvest 18 million board feet.

Within the Soldier-Butler Project, the Forest Service would build 7 miles of new roads, 9 miles of temporary roads and rescinded a previous commitment to decommission 37 miles of existing road, although eventually 100 miles are to be decommissioned. With all that, the Lolo Forest’s environmental assessment estimates the density of open roads will be as high as 7.7 miles per square mile in some places.

That’s already a high enough density to raise flags for grizzly bear advocates, but the Task Force broke it down even more in its study. Doing a GIS analysis, the Task Force found 156 miles of open road will cross the Soldier-Butler Project. The result leaves two-thirds of the project area with an open-road density higher than 1 mile per square mile.

The problem for the Citizen Task Force is the Soldier Butler Project sits right in the center of the 808-square-mile Ninemile Demographic Connectivity Area, which is ringed by Interstate-90 to the south, U.S. Highway 200 to the north and U.S. Highway 93 North to the east. It also overlays part of the Flathead Indian Reservation.

The connectivity area is part of the official monitoring area for the Northern Continental Divide Ecosystem population of grizzly bears. The northeastern third of the Soldier Butler Project is in core grizzly bear habitat.

Although the Ninemile area is outside the NCDE recovery area, it’s a key spot where grizzly bears are known to travel between the NCDE or the Cabinet-Yaak regions down to the Bitterroot ecosystem. Such migration is essential to preventing the various populations from becoming isolated and inbred. Maintaining migration corridors can help sustain populations and get the species off the Endangered Species List.

Over the years, several bears have crossed Interstate-90 and the Clark Fork River headed south from the Ninemile Valley. The first was documented in 2001.

Grizzly bears have snuck across the highway, but they don’t do well in forests with a lot of roads that allow more people and vehicles into backcountry areas. Bears tend to avoid roads but can be attracted to food along roadsides. That usually increases the possibility of human-bear conflict, and that tends to result in dead bears.

Studies have shown that the higher the road density in a forest, the lower the grizzly bear survival rate, and biologists are particularly concerned with the survival of females with cubs. Based on a 2019 review of the scientific literature, Canadian bear researcher Michael Proctor recommends no more than 1 mile of open road per square mile to ensure grizzly bear survival.

“We conclude that motorized access is best monitored and applied across smaller geographic areas to optimize the protection of important habitats to benefit the distribution, survival, reproduction, and density of females across a broad area,” Proctor wrote.

The NCDE grizzly bear Conservation Strategy recommends the same. But the Soldier-Butler Project road density is above that limit.

Upton said in her decision that “impacts to wildlife, specifically big game and grizzly bears, weighed heavily in my decision.” In response to public comment and suggestions from Montana Fish, Wildlife & Parks, she reduced the amount of thinning in a few units, limited some road-building and logging during the winter, and said hiding cover would be maintained near certain roads.

The U.S. Fish and Wildlife Service weighed in, requiring the Forest Service to minimize the work time spent in certain logging units, particularly so the 9 miles of temporary road and 40 miles of restricted road see as little use as possible to reduce the effect on grizzly bears.

“Both the Ninemile DCA and the Soldier-Butler Project Area are recovering from the legacy effects of a myriad of roads constructed primarily to provide access to timber sales,” said study co-author Mike Bader. “The Forest Service is not managing the area consistent with its designated purpose to provide continual occupancy by female grizzly bears with cubs and provide connectivity between isolated recovery areas.”

The Task Force also criticized the Forest Service for not taking private roads or roads on the Flathead Reservation into account, so the Task Force included those in its analysis of the project and the entire Ninemile connectivity area.

The analysis found that existing road density throughout the Ninemile area is already above that recommended for good grizzly bear survival, with 85% of the area having open road densities higher than 1 mile per square mile. The average road density over the entire area is 2.4 miles per square mile, and predictions are that less than half of females with cubs could survive at that density.

So adding yet another logging project and more roads adds insult to injury after the Forest Service pledged to decommission roads, Kreilick said.

The Citizen Task Force submitted comments on the Soldier-Butler Project and is considering further legal action. It wants all roads included in density calculations and wants the Forest Service to obliterate more roads so they can no longer be accessed by bikes or ATVs.

But for now, it plans to share the report with the Forest Service, the Confederated Salish & Kootenai Tribes, the USFWS, Montana Fish, Wildlife & Parks, and the Governor’s Grizzly Bear Advisory Council, which meets next week.