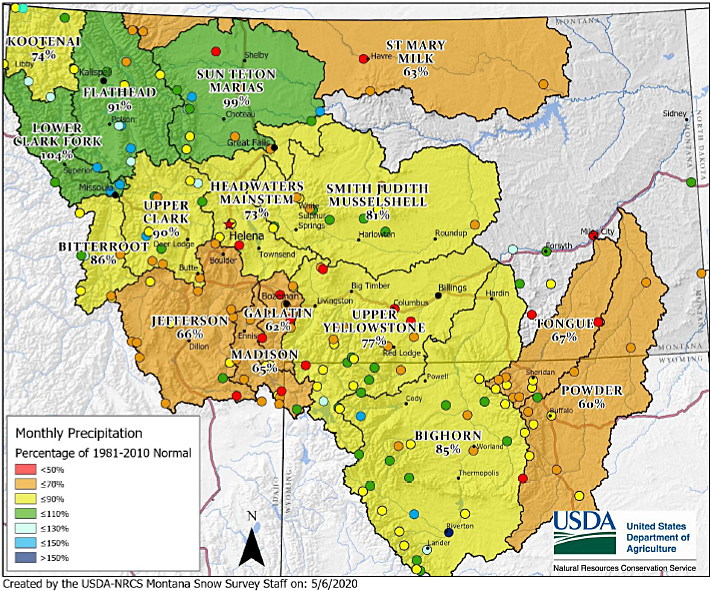 Most of Montana will head into summer with a sufficient reserve of mountain snow to feed the streams in spite of a dry April.

As of May 1, Montana had slightly above-normal snowpack statewide, according to the Natural Resources and Conservation Service monthly report. Two basins in the north-central region with about 140% of normal snowpack more than balanced out a few basins in the southwest with slightly below-normal amounts.

As has been the case for a number of years, the Jefferson and Madison were the two basins that ended up less than normal snow, about 94%, partly because April’s precipitation was only two-thirds of normal. But that tended to be the case statewide with precipitation for April averaging less than 80%.

With the first week of May being fairly warm, the snow is melting ahead of schedule and both basins have continued to slip. As of Thursday, the Jefferson had just 83% of its average snowpack while the Madison has retained slightly more snow to end with 88%.

In the west, the Clark Fork and Bitterroot river basins hit peak snowpack during the middle of April. Then, because precipitation during the month in this area was only about 90% of normal, the snowpack started decreasing, although slowly at first because temperatures stayed fairly cool.

A warm-up during the last week accelerated melting, causing the snowpack to end the month at about 108% of normal. New records for highest daily average temperatures were recorded April 29 at many mountain locations with some high-elevation sites approaching 50 degrees.

One week later, warmer temperatures during the first week of May have pushed the snowpack in both the Clark Fork and Bitterroot basins to slightly below-normal.

In the past, water specialists could analyze precipitation amounts basin by basin because within basins, valley precipitation didn’t differ much from that in the mountains. But with climate change, the difference between the two is becoming significant.

“This year, it bears mentioning since it is impacting the forecasts and could play a role in irrigation water supply if the weather patterns stay warm and dry,” wrote Lucas Zukiewicz, NRCS water supply specialist.

Mountain precipitation – mostly snow – started below average, climbed to above average in January and February, and then returned to below average in April, although some regions still have totals well below normal.

Forecasts issued by the NOAA’s Climate Prediction Center indicate Montana may get normal precipitation for May, but some parts of western Montana may experience higher than normal temperatures. Should this pan out, mountain snowpack could melt out faster than desired.

That could be further complicated by forecasts for the next three months that show a possibility of below-average precipitation in western Montana and increased chances of above-average temperatures across the whole state.

Warmer temperature and dry valleys can complicate the normal predictions for streamflow based on snowpack. Any rains will be sucked up by dry valley soils, leaving less runoff to flow into the rivers.

For now, the Blackfoot River is predicted to flow slightly above normal while the Clark Fork River above Bonner will run slightly below normal. But that means an average water year for the Clark Fork flowing downstream from where they join above Missoula.

Meanwhile, the Bitterroot River is predicted to have about 90% of its normal streamflow.