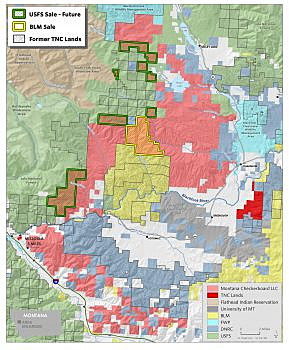 On Thursday, The Nature Conservancy announced it had sold the northern 4,480 acres of a 13,000-acre property along Belmont and Burnt creeks to the Bureau of Land Management. Now only a few parcels in the deal remain on hold.

“This project has been a blueprint for achieving conservation at a meaningful scale and would not have been possible without collaborative partnerships, forged over many years, among private landowners, community organizations and state and federal agencies,” said Chris Bryant, Western Montana Land Protection Director for The Nature Conservancy.

In 2014, the Nature Conservancy stated the Blackfoot Clearwater Project “is an important piece of the conservation puzzle in the Crown of the Continent, which is one of the few places left on Earth where no plant or animal is known to have gone extinct in the last two centuries.”

The area is home to threatened and endangered species, including grizzly bears, lynx and bull trout, along with elk, deer and other species. BLM policy is to protect and conserve sensitive species and their habitats, although that might be difficult if mining operations or oil and gas extraction is allowed, as laid out in the recent BLM resource management plan.

A few miles south of Placid Lake, the 13,000 acres are north of 5,500 acres the BLM bought from the Nature Conservancy in 2016. The 2016 purchase added to the land the BLM purchased in 1997, which surrounds the Blackfoot River west of the Lubrecht Experimental Forest.

The Missoula BLM office first announced the pending 13,000-acre deal with The Nature Conservancy a year ago, but then it was a matter of getting the money. The majority of the money has come from the federal Land and Water Conservation Fund, but the money had to be doled out in three portions.

About 8,000 acres was purchased in November with $5.6 million of LWCF money. Thursday’s chunk was made possible with another $3.5 million from LWCF.

Bryant said the BLM needs about $900,000 before the remaining parcels will be bought.

“It probably will be LWCF money, but it will probably be from other pots,” Bryant said.

The Nature Conservancy has promised a few nearby parcels to the U.S. Forest Service. The USFS has been promised a $9 million in LWCF grants to buy those properties, but the two parties haven’t closed on them yet. Bryant said it won’t be long before they’re public land too.

All told, The Nature Conservancy sales to the BLM and USFS will create more than 25,000 acres of new public land. And there’s a possibility of more to come.

Montana Checkerboard LLC owns a wedge of land extending north along Gold Creek between the USFS land and the new BLM property. Bryant said there’s a chance that it, too, could become public land, consolidating a large swath north of the Blackfoot River between Bonner and Potomac.

“There’s some interest from some folks to see it go to the BLM,” Bryant said. “But the environmental analysis hasn’t been done yet. It might not be too far off. I think it’s something they want to start working on.”