Much of western Montana is looking good for summer streamflows, in spite of recent warm temperatures and somewhat low precipitation. But the same can’t be said for other parts of the state.

The federal Natural Resources Conservation Service released its June 1 report for Montana’s water supply, warning that warm temperatures in the second half of May, particularly warm nighttime temperatures, caused runoff to accelerate, leaving less snow in the mountains to act as a reserve.

Water supplies are important to a state such as Montana, where the two top industries – agriculture and recreation – can be hurt by drought. So the NRCS spends the first half of the year assessing the monthly snow and precipitation amounts we need to see us through the second half of the year.

Surveys early in the year provide a preview of what to expect, but the June report provides the most accurate assessment of how well streams will run throughout the summer.

After last month’s snow survey reported a normal snowpack for western Montana, things were doing okay during the first two cool weeks of May. But the last week of May saw the jet stream move north, and air coming up from the southwest brought abundant sunshine and well-above-average to record-setting temperatures that caused rapid snowmelt at even the highest of elevations.

The unseasonably warm temperatures set new records on May 30 and 31 at many mountain SNOTEL sites and some valley locations.

Most importantly, it was the average daily minimum temperatures that stayed warmer than normal during late May in western Montana. In other words, nighttime temperatures weren’t dropping low enough to allow higher elevations to refreeze before the sun rose again. So the runoff didn’t slow as much at night. 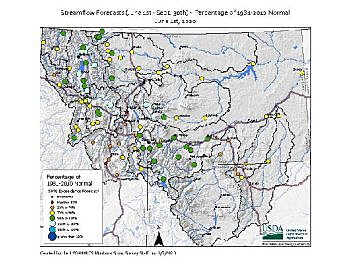 In the Madison, Jefferson, and Bitterroot river basins, this has resulted in a snowpack that is well below normal. The Bitterroot Mountains had 46% of their normal June 1 snowpack.

The western basins’ overall snowpack was still normal for June 1, which is a welcome change from last year, when the west had just 75% of its normal snowpack.

Fortunately, the western part of the state also received good precipitation during the first three weeks of May, which helped offset a dry April and record dry March.

The eastern side of the state wasn’t as lucky, with several areas receiving less than normal precipitation. The U.S. Drought Monitor estimates about a third of eastern Montana is already abnormally dry.

One area of concern is the Jefferson, Madison, and Gallatin basins of southwestern Montana. Monthly totals in this region were well below average for both April and May, resulting in crop-year precipitation totals that are in the bottom 10th percentile of all years on record. The U.S. Drought Monitor estimates this area is already in moderate drought.

The rapid runoff in late May and early June has led to flood warnings on various rivers including the Clark Fork River. The Clark Fork River above Missoula, where the flood level is 7.5 feet, peaked at 10.5 feet on May 21 and rose to a secondary peak of 9 feet on June 1.

The added rain over the weekend prompted the National Weather Service to issue a flood advisory for the Clark Fork above Missoula. The NWS cautioned the public to be careful near riverbanks because the river was predicted to rise to between 7.5 and 8 feet by Monday night and recede again by Wednesday.

However, because so much snowmelt is running down now, the Clark Fork River above Missoula is predicted over the summer to have slightly below normal streamflow – 96 to 98% – but will drop to 90% of average by the time it reaches Plains. Rock Creek, a popular fishing stream east of Missoula, will run at about 80% of normal.

Because of the low snowpack, the Bitterroot River is also predicted to run at about 80% of normal as it nears Missoula.

NOAA’s Climate Prediction Center doesn’t have good news for Montana’s summer forecast. The one-month outlook predicts higher than normal temperatures for all areas except the Kootenai basin, with the east of the state in more trouble than the west.

Extending out to the end of August, Montana still looks to be hotter than normal although the temperature trend flips, showing the western part of the state as more likely to have higher than average temperatures. The long-term outlook also predicts a drier-than-normal summer for the state.

By the end of August, some streams could get dangerously low and warm for trout, if the predictions hold.