Bears are trying to pack on the pounds in preparation for winter, and the smell of food can draw them into housing areas where they aren’t wanted. Gleaning your fruit trees is one way to keep them out of danger.

Tuesday is the official start of autumn, so nights are cooling off and the leaves are beginning to turn. It’s also when apples ripen on the tree and dot the ground below, and the sweet smell attracts birds, horses and squirrels. Unfortunately, it can also tempt bears.

To limit some of that temptation, volunteers with the Great Bear Foundation have been stopping at yards around town for the past week, just as they have for several years, to help homeowners glean their apple trees.

On a smoky Friday afternoon, Great Bear Foundation employee Heather Leach led two volunteers into a former orchard on Rattlesnake Drive to finish picking the last of the 10 apple trees there. Seven of the trees had already been stripped of most of their fruit the day before, and the resident horse knew he’d have at least one more bucket of apples to munch before the afternoon was done.

Walking up to the next tree, Leach raised her 8-foot hook to one of the upper branches and started to shake it. Apples rained down and bounced down the slope as the volunteers bent to catch and toss them into well-used cardboard boxes.

An hour and a half later, they’d collected about 200 pounds of apples. Leach carries an electric scale in the back of her SUV to total the weight of collected fruit, which she takes to Garden City Compost this year. That is, if some volunteers don’t end up taking some of the apples home.

Last fall, the Great Bear Foundation donated a total of about 10,000 pounds of apples to Western Cider, and individual Missoulians brought in another 10,000 pounds.

In past years, more volunteers have joined Leach and her colleague Elissa Chott for each work stint. But this year, they’ve limited it to two unrelated volunteers or volunteers from two households per two-hour slot because of COVID-19 distancing.

But that’s not the only thing different about this year.

Leach said that the number of requests for apple gleaning seems to be a bit down this year. Many of the same residents make calls for help each year but some people haven’t called in yet. Leach said she didn’t know if it was COVID-19-related or people are just a little slow this year.

Or maybe more people are taking their apples to Western Cider for its annual Apple Drive. Missoulians can take their apples – even bruised and wormy but no rotten ones – to Western Cider at 501 N. California Street. For every 40 pounds of apples, you receive a $5 cider coupon. During the drive, Western Cider donates 10% of sales to the Great Bear Foundation. 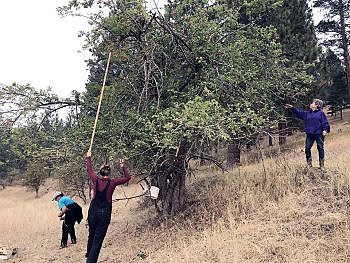 In fall, bears have an increased appetite, a condition known as hyperphagia, as they try to build up the fat reserves that will get them through their winter hibernation. So they’re a lot more interested in stuff that smells good like fruit trees, berry bushes, human garbage and recently killed game.

As a result, biologists report that bears are scouring for fruit throughout the region, including in the Grant Creek, Big Flat and O-Brien Creek neighborhoods, and in the drainages and river bottoms of the Bitterroot River. There have been multiple incidents of black bears in domestic fruit and garbage around Lolo, particularly in residential areas along the river bottoms.

In the Rattlesnake, there have been numerous reports of black bears feeding on domestic fruit and unfortunately finding unsecured garbage and bird feeders. One bear even entered a garage. Fish, Wildlife & Parks biologists set a trap for the bear but pulled it when the bear didn’t return.

The Seeley Lake area has the biggest issue with bears because of unsecured garbage containers, especially at overflowing campgrounds this summer. To reduce Seeley’s problem, FWP is getting bear-resistant garbage containers for several food-service businesses and is putting up enclosures around dumpsters and grease bins.

The sad thing is some residents purposely leave fruit in their yards so they can see bears. Although it can be a thrill, if bears get rewarded with food too many times, they become habituated and won’t try to find more natural food sources. That’s when biologists often have to kill them, because “a fed bear is a dead bear.”

Human garbage accounts for probably about 90% of the bear problem. Fruit isn’t available for that long and doesn’t regularly bring too many bears in, but it’s best to not give them added incentive. So Leach hopes the Great Bear Foundation phone starts ringing with more calls for help with gleaning.

To volunteer to help pick apples, send an email to gbf@greatbear.org.