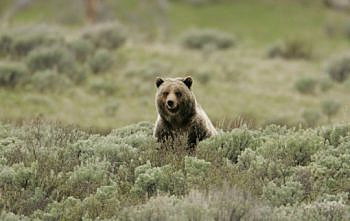 In a swipe at Missoula federal judges and the public process, Wyoming-backed legislation seeking to change the Endangered Species Act would prohibit any lawsuit for five years after a species is delisted and give states more control over delisting.

In a recent session of the U.S. Senate Committee on Environment and Public Works, Sen. John Barrasso, R-Wyo., said the Endangered Species Act was a failure, so he was proposing the Endangered Species Act Amendments of 2020. The bill would remove the ability to challenge a delisting for five years after the decision, elevate the role of the states in delisting, and provide better federal funding for species recovery.

Saying it would reauthorize funding for the Endangered Species Act for the first time in more than 30 years, Barrasso touted his bill as being collaborative, although he acknowledged parts of the bill didn’t represent consensus.

“Stakeholder feedback process made clear that at least one provision in my bill is a nonstarter for (environmental and wildlife) groups and for the committee’s minority. It also made clear the same provision is the top priority for my home state of Wyoming.”

That one provision is the five-year litigation ban. Once a species is delisted, the U.S. Fish and Wildlife Service continues to monitor a delisted species for five years to ensure that the species is able to stay healthy once protections are removed. Barrasso and others said it made sense to give the states that five-year period without interruption to prove they could manage the species successfully.

Barrasso had asked Wyoming Gov. Mark Gordon to testify in support of the bill. Gordon said the states have better capacity and expertise to manage any species on the ground, but they are limited by funding. They are also limited by lawsuits, Gordon said.

“The largest barrier to delisting is litigation, not based on whether a species is recovered, but litigation aimed at finding technicalities in how the U.S. Fish and Wildlife Service promulgated the rules in the first place,” Gordon said. “That is why we’re talking as much as we are about the grizzly bear. We are frustrated at every turn by the same venue and what-if scenarios.”

That “same venue” is the Missoula federal district court and perhaps the 9th Circuit Court of Appeals.

Environmental and tribal groups sued the U.S. Fish and Wildlife Service in Missoula federal court after the agency, at the behest of then-Interior Secretary Ryan Zinke, delisted the Yellowstone population of grizzly bears in 2017.

Had the delisting not been pushed from the top with questionable justification, the normal course of events would have had the U.S. Fish and Wildlife Service monitoring the species until 2022.

But the groups didn’t argue that the Yellowstone sub-population wasn’t recovered – they argued for the grizzly population throughout Montana, Wyoming, Idaho and Canada as a whole.

They pointed out that the U.S. Fish and Wildlife Agency hadn’t considered what would happen to the other grizzly bears if the Yellowstone sub-population were no longer protected. As part of that, they said the agency needed to create a plan to restore connectivity between populations to prevent inbreeding, and it needed to account for changing to new population estimates mid-stream.

University of Montana conservation geneticist Fred Allendorf has repeatedly said that connectivity is critical because the current populations aren’t large enough to prevent inbreeding, which could ultimately result in extinction.

During an August 2018 hearing, attorneys asked the court for a quick ruling because Wyoming had already planned a hunt that fall for up to 22 grizzlies. Taking a more moderate approach, Montana decided not to have a hunt while Idaho planned a hunt for one bear.

In September 2018, Missoula federal judge Dana Christensen agreed that the U.S. Fish and Wildlife Service hadn’t done all its work as required by law and relisted the bear until the agency completed its analysis. In July this year, the 9th Circuit upheld most of Christensen’s ruling while slightly reducing the amount of analysis the agency needed to do related to the other bear populations.

Wildlife groups pointed out that the agency’s analysis could have probably been completed in the almost two years it took to appeal the ruling.

But if Barasso’s bill passes, the successful challenge of the Yellowstone bear delisting would not have happened.

The bill would have also prevented the lawsuit challenging the Rocky Mountain grey wolf delisting in 2008. The challenge was prompted in part because Wyoming had an unsatisfactory management plan that allowed wolves to be killed on sight. In 2010, another Missoula federal judge, Judge Donald Molloy, reinstated protections for all wolves because the law didn’t allow the U.S. Fish and Wildlife Service to delist wolves in Idaho and Montana and not Wyoming.

Depending on the species, the lawsuit ban could have some detrimental results during the intervening five years, said Defenders of Wildlife CEO Jamie Rappaport Clark. Clark is a former director of the U.S. Fish and Wildlife Service who Barasso invited to speak on the bill.

“If the science says something different and the citizens are not allowed to challenge, the species will continue to decline, habitat will be lost, it will be in worst shape and citizens are powerless. If there are politically motivated delistings, pretty significant damage can occur,” Clark said. “The role of litigation is important, not to undermine or attack good decisions guided by science, but to help hold agencies accountable, to uphold the law and allow citizens to help Congress ensure that the laws they enact are doing what they’re supposed to.”

This isn’t the first bill to try to target the Endangered Species Act. The same committee had a Sept. 10 hearing on the Grizzly Bear State Management Act, sponsored by Sen. Mike Enzi, which would remove the Yellowstone population from ESA protection.

During the Trump administration, at least 75 Republican bills have been introduced, seeking to either undercut the Endangered Species Act or remove various species from protection. Many of the bills have been requested by the oil and gas industry, because the Endangered Species Act requires that species’ habitats be conserved, and that limits where extractive industries can drill.

But politicians need to be careful because the Endangered Species Act is very popular with the American public. A 2015 Tulchin Research poll found 90% of voters support the act while a 2018 Ohio State University study found the same for four out of five Americans.

“I will ask Trump’s nominee to the Supreme Court what is the proper role of states in our federalist system because I think we’ve lost track of it for decades, and that erosion needs to be stopped and reversed. And I think the ESA is one of many exhibits,” Cramer said.

Clark pointed out that species are federally listed only after state wildlife management has failed and a species is close to extinction. Plus, species often live in more than one state, so an “umpire” is needed, said Sen. Ben Cardin, D-Md. That’s why the protections of the Endangered Species Act are stronger than that of any state statute – Wyoming and West Virginia have no species protection laws – because “the ESA transcends state politics and science guides those decisions,” Clark said.

During the committee meeting, many agreed that a lack of funding was a major problem. Several groups have reached the same conclusion over the past few years, from the Western Governors Association to the Montana Governor’s Grizzly Bear Advisory Council. The funding authorization for the ESA expired in 1992, but Congress has continued to provide limited discretionary funds.

“The federal government really does need to bear more of that burden,” Gordon said. Several conservation groups, including the National Wildlife Federation, urged the committee to keep the provisions of the bill that all stakeholders could support, such as better funding. Rather than strangling the budgets of the U.S. Fish and Wildlife Service and land management agencies, providing more money could contribute to getting more species delisted, Clark said.

The bill is unlikely to pass before the end of the year, so Barrasso asked that all stakeholders work to get the bill passed in the next Congress.