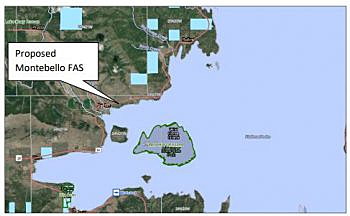 If all goes well, anglers and boaters could have one more public access along the shores of Flathead Lake. But it probably won’t happen for at least another year.

On Thursday, the Montana Fish, Wildlife & Parks commission unanimously approved the purchase of almost 15 acres to become the Montebello Fishing Access Site on the west side of Flathead Lake a mile east of Dayton along U.S. Highway 93.

The undeveloped property contains 650 feet of shoreline that could be used for boating and non-boating recreational activities, such as swimming, fishing and picnicking.

Anyone who tried to use one of the six existing FWP fishing access sites around the lake this summer knows they were packed with people and parking was limited to nonexistent. At Somers, trucks and trailers sometimes parked hundreds of yards up the highway.

That’s because almost 90% of the shoreline is privately owned, leaving the public only a few access points to launch their boats or just dip a toe in the water.

“Fourteen acres along Flathead Lake is at a premium these days. They’re not making more land along that lake – a lot of it is developed,” said Nick Gevock, Montana Wildlife Federation spokesman.

FWP proposed the project in July after the landowner, working through the Montana Outdoor Legacy Foundation, agreed to sell the property below appraised value in order to see the land go into conservation.

FWP has preliminary development plans that would include access roads, up to 40 trailer parking spaces, a boat ramp, dock, vault latrine, signage, boundary fencing and a host campsite. The proposed site would be open for day-use only.

During the public comment period, 54 comments were received and many from the Kalispell and Columbia Falls area spoke in favor of acquiring the land, while others voiced concern that it might increase visitation on Wild Horse Island.

But a group of nearby landowners submitted a petition opposing the deal, saying the creation of a fishing access site would devalue their property and diminish their quality of life due to trespass, litter and noise.

“No amount of good intentions or quality outreach will mitigate the adverse impacts that will come from the development of a FAS in our neighborhood. It would be unfair to lay the burden of such a project on us and we demand that this project be cancelled immediately,” the petitioners wrote.

FWP pointed out that property values on the lake show no signs of decreasing, and plans include having a site host living on the property to discourage any poor behavior.

Northeast Region commissioner Richard Stuker said he supported the acquisition because more access is needed on the lake, but he understood the landowners’ concerns because a few fishing access sites, including White Bear near Great Falls, are known for having problems. He encouraged FWP to be proactive in dealing with any problems on the new sites.

“We have to take the neighboring landowners concerns very seriously so we’re not creating more problems down the road,” Albright said. “Reading the decision notice and materials that came along with the petition, I think the department has done a good job of addressing those concerns and hopefully buffering the impacts on the adjacent landowners.”

With the commission approval, the property proposal now goes to the Montana Land Board on Nov. 16. If it’s approved there, FWP will need to get authorization from the 2021 Legislature to spend money on the land.

All that takes time. So don’t look for the site to open for at least a year, said FWP spokesman Dillon Tabish.

“I don’t think it will be ready to go by next spring or summer. Fall 2021 maybe,” Tabish said. “Particularly that host pad where we’ll have an onsite volunteer, that will take quite a bit of development. It’s not as simple as paving a parking lot and putting a ramp in.”