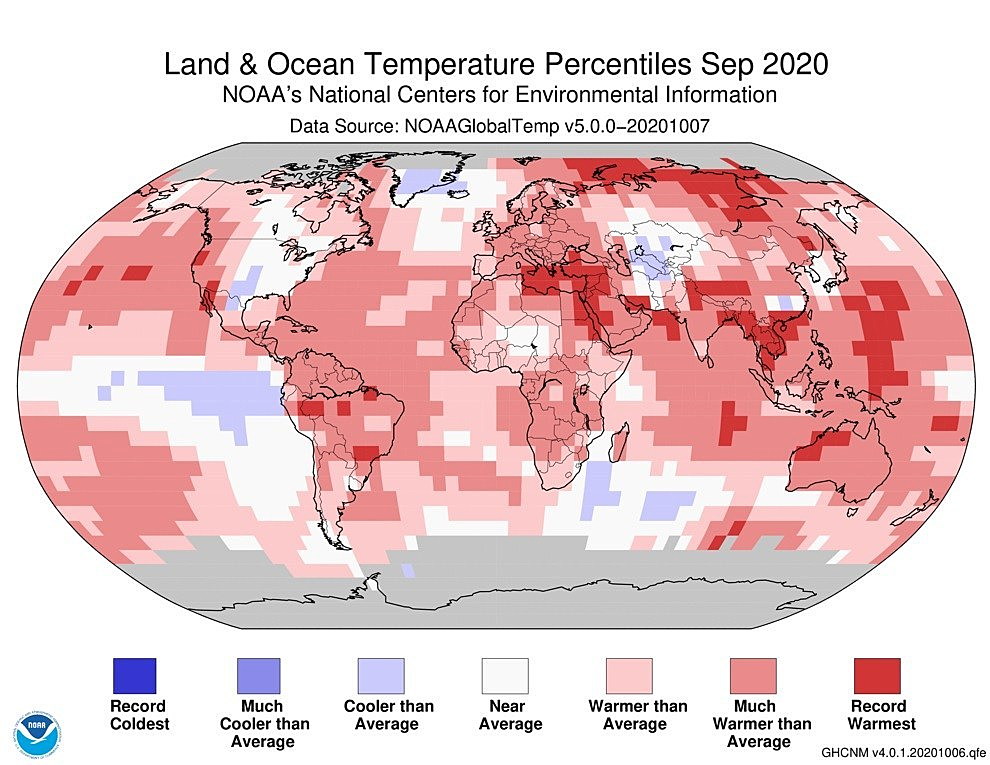 (CN) — September 2020 broke global records as the warmest such month in recorded history, according to federal meteorologists.

The global surface and ocean temperatures exceeded the 20th century average for the month of September by a full 1.5 degrees Fahrenheit, outstripping the previous record by .04 degrees.

“Warmer-than-average temperatures were present across much of the globe during September 2020,” the report by NOAA National Centers for Environmental Information states.

In Antarctica, temperatures were at least 2.7 degrees above average.

The month marked the 429th in a row where the average global temperatures exceeded the 20th-century average. That means Earth has been hotter than average for just shy of 36 years.

What’s more, the hottest Septembers have all occurred since 2005 and the seven warmest have happened in the last seven years.

“Overall, about 8.49% of the world’s land and ocean surfaces had a record-warm September temperature,” the agency said. “This was the second-highest September percentage since records began in 1951, behind September 2015.”

Nowhere was more affected by the hotter temperatures than Europe, where the average temperatures were 2.33 degrees higher than the 20th-century average — the largest departure from average of any of the continents.

“Europe’s five warmest Septembers have occurred since 2006,” the report states.

The Netherlands set a record when it recorded a temperature of 95 degrees on Sept. 15, recorded in the town of Gilze-Rijen.

In California, more than 4 million acres of land have been blackened by more than 30 major fires that began in August, September and continue to burn into October. One fire in the northern portion of the state burned more than a million acres, easily becoming the largest wildland fire in Golden State history.

Washington state and Oregon also experienced record wildfires as did many of the states in the Rocky Mountain region during the warm September.

Globally, the Kingdom of Bahrain experienced warmer than usual weather that underscores the atypical heat that many corners of the planet experienced last month. The country weathered a 10-day stretch beginning in early September where the thermometer exceeded 104 degrees Fahrenheit at least once every day, and its mean temperature for September was the highest on record.

September was not an anomaly either, as the preceding months in the calendar also say soaring temps.

The agency has been keeping temperature records for 141 years.

All of this year’s heat has also affected the globe’s poles, with the Arctic recording the second-smallest sea ice extent in the 42-year satellite record.