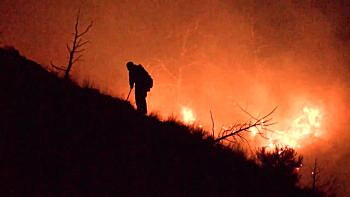 (CN) — Republicans and Democrats both show broad support for more environmentally-friendly laws amid the climate crisis that threatens to displace millions of people, according to a new survey.

When asked about specific policies, an overwhelming 82% said they support tax rebates for those who buy energy-efficient vehicles or solar panels. Another 82% support an increase of funding for research into clean energy sources.

Citing an increased cost for businesses, Republican congressional leaders have long opposed policies that would reduce carbon pollution. But that has slowly changed, as evidenced in last month’s pandemic relief and spending bill.

The bill, which included billions to promote solar and wind power and reduce hydrofluorocarbons, picked up strong bipartisan support.

“Republicans and Democrats are working together to protect the environment through innovation,” said Republican Wyoming Senator John Barrasso in a statement last month. “This historic agreement includes three separate pieces of legislation that will significantly reduce greenhouse gases. All three of these measures will protect our air while keeping costs down for the American people.”

As President-elect Joe Biden and his administration transitions into the White House next week, he faces a slew of promises made on the campaign trail, including a vow to “put the country on a sustainable path to achieve net-zero emissions no later than 2050.”

That goal finds broad support among Democrats and Republicans, according to the study. Seventy-two percent of registered voters said they support moving the U.S. economy “from fossil fuels to 100% clean energy by 2050.”

Two-thirds of those surveyed also support the elimination of all pollution created by oil, natural gas and coal producers by 2050. While public support for the change is high, industry lobbyists are likely to continue to push back on that goal. In 2020 alone, oil and gas lobbyists spent a combined $83 million, including top spenders Chevron, Exxon Mobil and Koch Industries.

Still, Biden finds broad support for his proposed policies, including 78% percent who said they support tougher fuel efficiency standards and 67% who support the installation of half a million vehicle charging stations by 2030.

Biden has also promised to rejoin the Paris climate accord, a move supported by 75% of Americans surveyed.

Friday’s survey shows both Republicans and Democrats are concerned about climate change and approve of policies to address it. That could translate into political support for Biden’s plan as future legislation is introduced.

In an introduction of the Biden administration’s scientific advisers on Saturday, Vice President-elect Kamala Harris said they will adhere to the science on the climate crisis.

The survey was conducted of 949 registered voters and has a margin of error of plus or minus 3 percentage points.