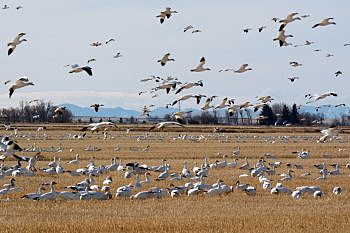 (CN) — Conservationists and legal experts blasted the Trump administration’s rollback of protections for migratory birds Tuesday as a last-minute gift to industry at the expense of the environment which could complicate the Biden administration’s environmental policy goals.

The U.S. Fish and Wildlife Service finalized regulations Tuesday that will limit the scope of the Migratory Bird Treaty Act to apply to landowners and industry operatives only when they kill birds on purpose, letting them off the hook when birds are accidentally killed by oil spills or other environmental hazards.

New York University Law professor Richard Revesz said the new rule will likely be overturned by the courts, Congress or by the incoming Biden administration, but cautioned the damage in the near term is significant.

“I would be very surprised if this rule is in effect in two years, but it will create burdens and difficulties in the meantime,” he said.

Specifically, while a court may enjoin the federal government from implementing the rule, it will take the federal agencies under President-elect Joe Biden significant time to undo the regulations as they must undertake a formal rulemaking process that can take years.

“It may delay beneficial steps the Biden administration may have taken more quickly had these rollbacks not happened,” Revesz said.

Trump administration officials say the rollback hews to the original intent of the law and will be a boon for landowners and industry operatives who have been wrongly held accountable for the accidental deaths of migratory birds.

“This rule simply reaffirms the original meaning and intent of the Migratory Bird Treaty Act by making it clear that the U.S. Fish and Wildlife Service will not prosecute landowners, industry and other individuals for accidentally killing a migratory bird,” said outgoing Interior Secretary David Bernhardt in a statement.

Furious environmentalists say the last-minute change is a blatant giveaway to the oil and gas industry at the expense of a suite of endangered species, with knock-on effects for all bird species in North America and the environment as a whole.

“This eliminates protections for every bird in this country,” said Erik Schneider, policy manager for the National Audubon Society. “We are losing time that the birds don’t have.”

The Audubon Society estimates bird populations in the United States have diminished by 3 billion since 1970. The organization says the federal government needs to be doing more to protect birds, not less.

While most presidential administrations engage in midnight rulemaking, Revesz says the extent and nature of the Trump administration’s efforts are unique.

“The combination of the volume and the perniciousness is wholly unprecedented,” he said. Wildlife advocates have called on the incoming Biden administration to not only reverse the regulation rollbacks, but to make the regulations stronger and more able to withstand future attempts to weaken the rules.

“Through the courts, Congress, and administrative action, it is critical we do everything we can to not only reinstate the full protections of the Migratory Bird Treaty Act, but also protect it from similar attacks in the future,” said Sarah Greenberger, with the National Audubon Society. The organization called on the Biden administration to reinstate the rules and persuade Congress to strengthen the rules.

The Trump administration has repeatedly argued the protections as stipulated in the original law exclusively apply to actions that purposefully kill birds and should not apply to activities that accidentally endanger birds, such as accidental oil spills.

This past August, a federal judge explicitly rejected that rationale and found the Migratory Bird Treaty Act applies to all activities that result in the deaths of migratory birds.

“There is nothing in the text of the MBTA that suggests that in order to fall within its prohibition, activity must be directed specifically at birds,” said United States District Court Judge Valerie Caproni in a 31-page ruling issued Aug. 11. “Nor does the statute prohibit only intentionally killing migratory birds. And it certainly does not say that only ‘some’ kills are prohibited.”

The Trump administration has appealed the ruling. But its record on withstanding court challenges in its quest to roll back environmental regulations is poor.

“The Trump administration has lost 83% of the cases where it tried to roll back environmental regulations in many instances because the analysis and justifications were so poor,” Revesz said.

“It’s an abysmal record, and it’s quite likely a court will strike down this effort as well.”