In the mountains above St. Regis, the Forest Service road was muddy where it probably should have been snow covered. Still, the houndsman checked the GPS units on his dogs and then turned them loose to hunt.

Sitting in his truck, the man watched the dog dots on his tracking device as they meandered up a canyon. Suddenly, the dots started moving faster. The hounds were on the track of a mountain lion.

For the past two months, this scenario has sporadically played out in the forests of the lower Clark Fork River region northwest of Missoula. But the cats treed by these hounds won’t be filling a hunter’s tag. Instead, they’ll donate a pinch of tissue for research then be on their way as Montana Fish, Wildlife & Parks biologists carry out their second season of mountain lion monitoring in western Montana.

But this year is a little unusual. Climate change and complications from a pandemic have made this winter more challenging than most, and the houndsmen haven’t been as busy as they’d probably like.

“COVID’s thrown a wrench into things,” said Molly Parks, FWP mountain lion monitoring technician. “In an ideal world, everyone could stay in the same bunkhouse at the same time like we did last year. If we had good conditions, we could run multiple teams at the same time. But we can’t this year.”

The monitoring is part of the new mountain lion management strategy, adopted in 2019, that takes advantage of new scientific techniques, such as DNA analysis and advanced statistical methods. It has also adopted the concept of “ecoregions” instead of tiny hunting districts to monitor populations. The four large ecoregions were created to contain similar habitat and are sizeable because mountain lions move quite a bit.

Missoula is at the southern end of the Northwest Ecoregion, which is the smallest region in the state but still contains the best habitat, with forests covering more than 90% of the area. By contrast, the expansive Eastern Ecoregion covers the prairie region of the state where mountain lions are much more scarce so it won’t be monitored.

Before 2019, biologists estimated the population using only hunter success rates – they assumed the population was decreasing if hunters filled fewer tags. The problem with that is hunter harvest will lag population changes by a year or two so mountain lion numbers could dwindle more before FWP could change the harvest quotas.

For example, the severe winter of 1996-97 killed about half of the whitetail deer – primary prey for mountain lions – in northwest Montana, but mountain lion hunters didn’t notice a difference in success until about three years later.

The management strategy was implemented last winter, when biologists sampled lions in a 984-square-mile grid south of Libby. Last winter was also a bit challenging, because December and January were unusually dry. Fortunately, February made up for it, snow-wise, and the houndsmen, sometimes with three teams working at a time, treed 75 lions before things started to melt again in March.

The best conditions for tracking lions is when storms are regularly passing through and there’s consistently fresh snow. The hounds can pick up the scent in fresh tracks and away they go. But, if the tracks are more than three or four days old, they can look fresh but they don’t help the hounds. The cats could be long gone because they “can move impressive distances,” Parks said.

“We had a race (last month) where the dogs trailed a cat 10.1 miles,” Parks said. “It wasn’t like they chased the cat 10 miles – they were able to follow a trail for miles until they finally jumped the cat and then chased until they treed.”

Another frustration with a spotty snow year is when the snow disappears below a certain elevation, because again, the hounds can lose the scent if the cat runs to lower ground.

This year’s temporary monitoring area – an extensive grid of 5-by-5 kilometer squares that extends about 12 miles either side of Interstate 90 between Alberton and De Borgia – was selected because the habitat resembles the monitoring area near Libby.

Parks has about six teams of private houndsmen with a couple husband and wife teams, that cycle through a Forest Service bunkhouse in St. Regis when the tracking conditions are favorable. They’re paid for each day they are sent out. But like last year, that hasn’t been that often so far. Parks is hoping for a repeat of last year’s snowy February.

When they can get out, the houndsmen watch their dogs on their GPS trackers until they see the dogs have treed a lion. They can tell because the dots or dog symbols don’t move and the bark indicators on the dogs’ collars pick up the frequent barking. Then they drive and hike into the tree.

“They fire a biopsy dart at the lion’s hindquarters that collects a tiny little muscle sample the size of a pencil eraser, maybe a little smaller. The dart doesn’t stay in the cat. It falls out and you collect it at the base of the tree. If you can find it. It can be tricky,” Parks said with a chuckle. “It’s very non-invasive.” 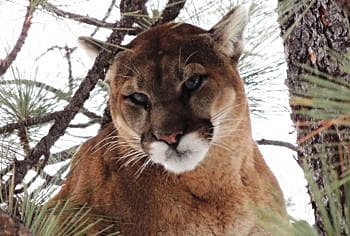 Before Christmas, the houndsmen had sampled about five lions and have gotten out a few more times since. But Parks doesn’t depend just on dart samples. She also collects mountain lion scat and successful lion hunters also contribute a tissue sample. Hunters can kill up to 20 lions north of Interstate 90 and 30 lions south of the highway. But they may be running into the same problem with the lack of snow.

All those samples will be analyzed for DNA to see how many cats were treed more than once and how they are related to each other. Using that information and other data such as location information, statisticians will compute a population estimate for the Clark Fork region. That will then be combined with the data from last year to come up with an estimate for the Northwest ecoregion, which can aid biologists in setting better hunting quotas.

Parks said that tentatively, the estimate could be released sometime this summer, barring COVID difficulties or other demands. Then next winter, they’ll start sampling in the next ecoregion.

“Up until this point, the question has been how many are out there?” Parks said. “This is brand new – that’s what’s really exciting about it. This is FWP’s approach trying to be more intensive and take this really scientific approach to estimating our population of lions.”