What was predicted to be a La Nina winter is off to a slow start in Montana with most places receiving less-than-average snow but higher-than-average temperatures.

On Tuesday, the U.S. Natural Resources Conservation Service published its New Year’s snowpack and water supply observations that included a deep scarlet map of Montana, showing that December’s average temperatures were about 5 degrees warmer statewide than the 30-year average.

Less than a handful of areas, including just north of Flathead Lake, reported just a degree above normal while the northeastern third of the state had average temperatures 8 degrees above normal.

That’s worrying but maybe not surprising for 2020. The National Oceanic and Atmospheric administration reported that, worldwide, 2020 was already the second hottest year on record as of November.

Pair that with the observation that the northeastern third of Montana received just 70% or less of the normal precipitation for December, and it could be a tough summer if conditions were to remain the same. The vast majority of the state received less than normal precipitation, with normal amounts falling only in pockets around Kalispell, northeast of Billings and in the north portion of Glacier National Park.

This may be the way winters go as the climate changes in Montana, because last year’s moisture started much the same way: a couple early snowstorms in October followed by a mostly dry November and December. For those who remember, it led to a cold, snowy February and that’s the hope for this year.

While December was overly warm and dry, the snow and precipitation that has fallen in the mountains since Oct. 1 mostly managed to endure. The Flathead, Bitterroot, Helena Valley and Upper Yellowstone basins have close to average snow in their mountains for the end of the year. In the far north, the mountains of the St. Mary’s and Sun-Teton-Marias drainages have about 15% more snow than normal while the Milk River drainage is buried under a snowpack 55% above normal.

But some drainages, including the upper and lower Clark Fork, the headwaters of the Missouri, the Smith-Judith-Mussellshell, contain less than 90% of their normal snowpack. As usual, the Madison drainage is the worst-off with 69% of normal. 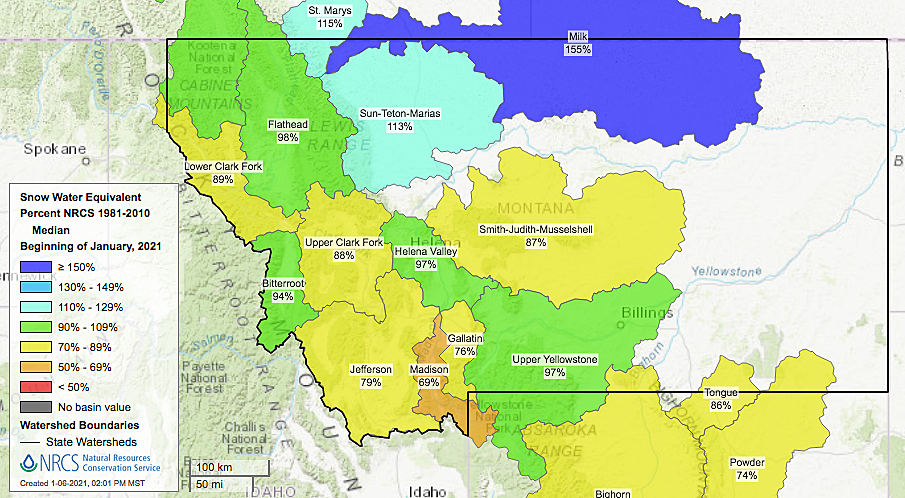 Most basins are doing a bit better for total precipitation since October. But that needs to continue, because December pushed more of Montana into drought. About two-thirds of the state is at least abnormally dry, with a third of that in moderate drought or worse, mostly in the far east. A year ago, only 10% of the state was abnormally dry.

It’s too early to make any predictions how the year will turn out. Three or four months of potential winter still remain. The May 1 snowpack report is usually the best indicator of whether there’s enough snow to see the state through the summer or how much drought we have to deal with.

However, in the past, western Montana has normally received the bulk of its snowpack between November and February. That doesn’t leave much time.

Hopes for a good winter had started high, because meteorologists saw indications – cool instead of warm water moving to the equatorial oceans – that this would be a La Nina year, which usually brings more moisture to the northwest off the Pacific Ocean.

In December, National Weather Service meteorologist Corby Dickerson told the Clark Fork Coalition that North America is in a moderate La Nina, with drier conditions in the southwest and wetter in the northwest. That’s not good news for the southwest, much of which is already in extreme to exceptional drought, including much of Utah and Arizona.

So far, La Nina hasn’t really kicked in for Montana. January isn’t showing much indication of being a snow-bringer. The NOAA outlook for January shows higher than normal temperatures are likely while precipitation is supposed to be average. But the 10-day outlook shows only sporadic snow in the forecast.

There’s still hope for February and March because the three-month outlook predicts slightly colder-than-average temperatures, especially along the High Line, and a chance for higher-than-normal precipitation.

Dickerson said 87% of La Nina years result in above-normal snowfall. But it comes in “little dinks of 2 inches at a time.”

With a drought starting to deepen, Montana needs all the dinks it can get.