As millions of Texans went without power this week during a historically rare cold stretch, the suffering turned into the latest political battleground — even 1,000 miles to the north — in the debate over how, or whether, to adapt the nation’s energy system to a warming climate.

Republican politicians in Montana and across the country falsely claimed that wind energy failures were a major cause of the outage, disparaging the hypothetical Green New Deal and doubling down on the primacy of fossil fuels.

Climate activists and NorthWestern Energy both told Montana Free Press the Texas incident should serve as a warning for Montana — though they differ on what lessons to take from it.

Extreme weather events like the one that hit Texas are expected to become more common as the climate warms. Such extreme events are likely to increase peak demand for electricity, and also jeopardize the infrastructure that makes up the complicated grid that moves electricity from power plants to homes and businesses.

Those challenges are happening at the same time that governments across the state, country and world are working to decrease reliance on fossil fuels, which emit greenhouse gases linked to global warming. The Climate Solutions Plan put out by then-Gov. Steve Bullock’s administration last year recommends that Montana bring net greenhouse gas emissions in its electricity sector to zero by 2035.

Hughes said it’s unfortunate that when millions of people are suffering, the incident is deployed to politicize the renewable versus fossil fuel debate. The focus, she said, should be on how to build a more reliable and sustainable electricity system that works for everyone.

“We know extreme weather events are increasing, and the effects of a warming climate have something to do with that,” Hughes said. “Do we want to keep the blinders on?”

As the outages stretched on in Texas, Republican officials in Montana took to the internet to spread disinformation about the outages’ causes and disparage wind energy.

In a discussion with Michael Hoy, general manager of McCone Electric Co-op in Circle that was posted on Twitter, Republican U.S. Rep. Matt Rosendale falsely claimed lack of wind production was responsible for the outages.

Republican U.S. Sen. Steve Daines retweeted a years-old photo of a wind turbine being de-iced in Sweden (the retweet has since been removed) and said the rolling blackouts in Texas demonstrate the need for “reliable energy sources like natural gas and coal.”

The problems in Texas were not primarily caused by frozen wind turbines or a Green New Deal that, at present, does not exist. They were caused by a widespread failure of every source of energy, most notably natural gas — a failure experts had warned of, but Texas leaders ignored. 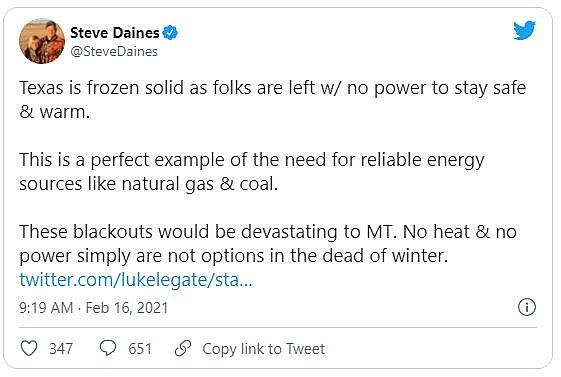 The Electric Reliability Council of Texas, which operates most of the state’s grid, said the extended rolling blackouts were instituted to avoid the imminent threat of a catastrophic months-long outage.

In a statement to MTFP, Daines spokeswoman Katie Schoettler said “radical, knee-jerk energy policies like the Green New Deal which eliminate fossil fuels and focuses on a limited portfolio” would worsen problems like what happened in Texas. Schoettler said Daines retweeted the picture as an “example” of what was happening in Texas.

“Texas has an overreliance issue on intermittent power. This is not to say wind was the only issue, but it is a major one that led to the events that unfolded in Texas. Nearly half of the wind turbines froze. And Texas did not have the baseload power to balance the grid,” Schoettler said.

In fact, natural gas is supposed to make up to 80% of electricity generation in Texas during peak usage, but half of all natural gas production in the state was taken offline by the freezing weather, according to the Texas Tribune. Just 7% of peak generation was expected to come from wind. Neither wind turbines nor natural gas facilities are winterized in Texas, where temperatures rarely dip below freezing.

Experts have said wind energy shortfalls were not the cause of the problems in Texas, but Republican officials have adopted the talking point regardless. Like Texas senators Ted Cruz and John Cornyn, Daines has long been a reliable ally of the fossil fuel industry. He recently pledged to fight the nomination of Rep. Deb Haaland, D-New Mexico, as the first Native American Secretary of the Interior because of her opposition to fossil fuels and support for President Joe Biden’s decision to cancel the Keystone XL pipeline.

In his recent re-election campaign, Daines received $574,585 in donations from the oil and gas industry, the fifth-most of any Senate candidate in the 2020 election cycle, according to OpenSecrets.

In his less than two months in Congress, Rosendale has also pushed back against Haaland’s nomination, citing concerns for fossil fuel industry jobs in the state. Rosendale received $125,130 from the oil and gas industry in the 2020 election cycle, according to OpenSecrets.

As evidence grows about what caused Texas’ grid failures, it appears that the state’s unique status as unconnected to the rest of the country’s grid and an overall lack of regulation in the system are likely contributors to the failures, Hughes said.

“This is not a wind energy problem,” Hughes said. “This is a planning problem.”

In Montana, where the state has two regulated monopolies that are connected to much larger regional grids, similar problems have not unfolded during sustained frigid temperatures in recent weeks. Most of the state is on the Western Interconnection Grid with states including Washington, Oregon and California.

“We were able to have the supply that was required to keep the grid in balance,” Black said.

But Black said extreme weather events are a concern for NorthWestern Energy. During peak loads, NorthWestern has to purchase up to 46% of its energy on the short-term market — something the company says puts its customers at risk of volatile prices and, as more fossil fuel electrical sources are taken offline, shortfalls. The Northwest Power and Conservation Council has warned that increased generating capacity is necessary to avoid blackouts in coming years.

“We are really concerned about it,” Black said.

As a regulated monopoly, NorthWestern Energy gets a set rate of return on its investments, so the company would profit more from building a new gas-fired power plant — a stated goal in the company’s 2019 procurement plan — than from buying electricity from the market and selling it to customers.

Anne Hedges, director of policy and legislative affairs at the Montana Environmental Information Center, said the company is exaggerating the problem of purchasing market electricity in an effort to increase its profits.

The Public Service Commission, an elected body, regulates NorthWestern on behalf of Montana citizens, but in recent years the company has lobbied the state Legislature to relax PSC controls over the company. For example, the Montana House Energy, Technology and Federal Relations Committee recently tabled House Bill 99, a bill supported by former PSC Commissioner Roger Koopman that would have strengthened PSC authorities, but is still considering House Bill 245, a bill drafted by NorthWestern that encourages investment in fossil fuels.

Hedges said those are just two examples of a trend of NorthWestern asking the Legislature to limit the PSC control over the company.

Indoor-icicle chandeliers in Texas. The most active hurricane season ever. Red skies up and down the West Coast as record acreage burned in wildfires.

The weather in the past few months has showcased the extremes experts say are likely to be exacerbated by a warming climate.

Building a more reliable electrical grid — resilient to the damages caused by extreme weather and adaptable to peaks in demand — is more critical than ever, he said.

“We’re trying to get a grid we can always count on,” Heutte said.

Heutte said that means no single source of energy. The recent events in Texas and in Heutte’s home state of Oregon, where there were record power outages after an ice storm, show that even sources generally considered reliable, like coal and natural gas, can fail in the face of unanticipated extremes.

Rather, he said, power companies should look to increase local generation, develop a diverse energy portfolio including wind, solar and hydro, and increase investment in backstops like batteries and pumped storage to make the grid more reliable.

This story originally appeared in the Montana Free Press and was reprinted with permission.