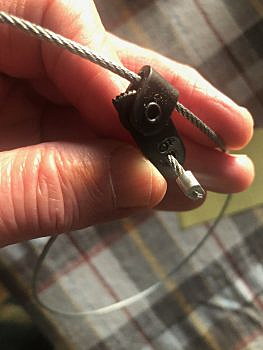 A few weeks ago, Missoula residents Fred and Linda Lerch took their dogs for a hike up Black Cat Canyon near Frenchtown. Suddenly, the pleasant day took a bad turn as they ran into another couple still unnerved by a situation that occurred just minutes before.

The other couple’s dog had been caught in a trapper’s snare. They had tried frantically to get the dog loose while trying to dial 9-1-1 in an area where reception was spotty. They finally succeeded in freeing the dog, which fortunately survived, so they were taking him back home.

Forewarned, the Lerches continued to hike down a gated Forest Service road only to find two additional snares just off the road. Luckily, their dogs weren’t caught.

“There were no signs at the trailhead alerting us that traps were present,” Lerch said. “The locking mechanisms on snares would be hard to disengage if you were not familiar with them. It’s sure changed my hikes with Hank, for sure.”

Small snares are legal in Montana, although the ones the Lerches found were illegally set too close to the road. They’re supposed to be no closer than 100 feet.

But now, pet owners and wildlife advocates may have another concern if House Bill 224 passes, allowing trappers to set snares big enough for wolves. It could be especially problematic with so many newcomers moving into Montana who have no experience with traps.

“Sustaining hunter opportunity for ungulates is also an objective of this House Bill 224,” Fielder said.

Fielder, himself a trapper, is also sponsoring HB 225 to extend the wolf hunting and trapping season by a month to further control wolves. He often points to Idaho as the example he wants Montana to follow.

Montana sportsmen can already kill up to five wolves each in a season, although only trappers are usually capable of killing that many wolves. But trappers want more opportunity, according to the five who testified in favor of the bill. Representatives for the Montana Woolgrowers and the Montana Farm Bureau Federation also spoke in favor

Matt Lumley of the Montana Trappers Association said snares is more effective than leghold traps and safer for the trapper because they’re light and easy to set. Others said trappers prefer snares in winter because they don’t have to regularly go in and clear away the snow and ice.

Lumley said it’s possible to set snares so they’re less likely to catch dogs, but trappers have to be taught how to do it.

“The wolves are a much greater danger than these snares,” Lumley said. “But just because you can use a device doesn’t mean you should. There is a responsibility factor.”

But the more than 30 people opposing the bill said the larger cables in larger loops higher off the ground to catch wolves aren’t safe for other wildlife or pets exploring public land. Not all trappers are responsible, and the time it can take for a wolf to die in a snare is anything but fair chase.

Dave Pauli of the Montana Animal Care Association has participated in two Citizens Trapping Advisory Committees, the purpose of which was to reduce conflict between trappers and recreationalists.

“I am against HB224 because it is a conflict-creation bill that would worsen relationships between user groups,” Pauli said. “We know more dogs and nontarget animals will be caught in these snares. Unlike other traps where hikers can hear their dogs yelp in pain, snares can quietly strangle the dog and allow no vocalization.”

One problem is snares don’t always catch animals in the perfect spot around their necks, leaving them to struggle. Plus wolves have strong neck muscles and reinforced tracheas so they often take longer to die. The Fur Institute of Canada says snares require 8 minutes to strangle an animal if everything works just right.

Mountain lion hunters spoke against the bill because wolf snares could kill their hounds. Often, lion hunters are far away from their dogs watching with a GPS tracker, and they wouldn’t know a hound was in trouble until it was too late.

Fred de Lepper of Kalispell said game wardens are already spread thin, and more conflict resulting from snares would add to their workload.

These are just some of the reasons Montana FWP has not allowed wolf snares while other states have. Acknowledging Montana’s more reasonable management, the U.S. Fish and Wildlife Service cleared FWP to manage its wolf population before Idaho or Wyoming.

Montana Wildlife Federation spokesman Marcus Strange said such a decision should be left up to the FWP commission. Putting it into law would mean FWP biologists couldn’t limit the use of snares if the wolf population started to suffer.

“Let’s call HB224 what it is – it’s a kill bill to kill more wolves. Because a lot of people don’t want wolves in Montana,” said Wolves of the Rockies spokesman Marc Cooke. “Region 1 sportsmen are complaining that they have no elk, but they do have plenty of elk. It’s just that they’re on private land that (sportsmen) can’t get access to.”

One of Fielder’s arguments is wolves are killing the elk in Region 1. He said the only reason many districts in Montana have too many elk is because they don’t have wolves.

But no scientific study has shown that wolves are responsible for the elk numbers. Many things can cause elk to struggle from disease and other predators to too many people moving into their habitat and interrupting their migratory routes.

According to 2018 FWP survey numbers, only five of 19 hunting districts in Region 1 were below population objective, which is a manmade number in the first place.

“How can this bill or other wolf management bills be passed if there’s no scientific evidence to support claims that wolves are negatively affecting ungulate numbers?” Costerousse said.

If the bill passes, Stephen Capra of Footloose Montana is worried that trappers will start using power snares, spring-powered nooses that Wyoming banned as part of a package of trapping restrictions in November.

“This is a terrible bill – it should not move forward,” Capra said. “For most public lands, there is no law for my animal to be on a leash. When I have them running free, it’s the highlight of their week or day. I don’t want them to wind up in a snare.”

The committee took no action on the bill.