The U.S. Environmental Protection Agency has published its draft risk assessment for the Smurfit-Stone mill site, but locals question whether the agency has gone far enough in testing for toxins, particularly cancerous ones.

After explaining how the EPA identified “chemicals of potential concern” on the site, Folland said the agency identified three metals that exceeded limits in the shallow groundwater below the main factory and another three – manganese, cobalt and arsenic – in the surrounding area.

The surrounding area also had higher levels of dioxins and furans in the soil around the former settling pond.

As to fish consumption, Folland said recreational anglers have to be concerned only with northern pike, while tribal fishermen, who tend to consume more fish, have to worry about eating both northern pike and rainbow trout due to levels of polychlorinated biphenols.

PCB’s are highly toxic industrial compounds that were banned in 1977 but persist in the environment at dangerous levels. They tend to accumulate in the sediment of streams and lakes and accumulate in the fatty tissue of fish. PCB’s weren’t used in the wood pulping process, but they were part of the electrical transformers that powered the plant.

“Risks are being driven by PCB’s,” Folland said.

The advisory group didn’t question that. But they raised several other concerns about the EPA assessment, particularly the EPA’s methods related to dioxins, which were a byproduct of the pulping process.

The EPA evaluates carcinogens differently and has different risk limits than for non-carcinogens. Folland said dioxins are potentially cancerous and the EPA used to have a cancer toxicity value for them in the 1990s. But now, the EPA uses non-cancer limits for dioxins.

“There’s limited evidence it can cause cancer in humans, but it’s not conclusive,” Folland said. “The scientific community agrees it has carcinogenic properties, but since the toxicity value was established, more information came out that led us to reevaluate the carcinogenicity of dioxin.”

Folland didn’t elaborate on what information came out, but the EPA’s classification of dioxins has a concerning background.

After the Love Canal tragedy in 1978, where New York residents were sickened after tons of industrial chemicals, including dioxins, were dumped in the canal, the EPA classified dioxin as a probable human carcinogen and known animal carcinogen in 1985. Two years later, documents leaked to the Washington Post showed the American Paper Institute was pressuring the EPA to “rethink” the dioxin classification. A few years later, the Chlorine Institute joined in.

In 1997, the International Agency for Research on Cancer declared dioxin a known carcinogen, as did the National Toxicology Program, a research branch of the National Institutes of Health, in 2001. But after the EPA published its 2000 draft report declaring dioxin a carcinogen, the National Academy of Sciences published a 2006 report saying the EPA’s human cancer risk may be overstated.

So the EPA announced in 2010 it would reanalyze dioxin. The chemical industry and the Department of Defense submitted comments in 2010 seeking to delay or weaken the proposed EPA standards for dioxin. Now eleven years later, nothing has been done.

So the Smurfit-Stone health risk assessment treats dioxins as non-cancerous.

“I know that probably sounds controversial,” Folland said. “But if you use the old EPA cancer toxicity value, cancer and non-cancer effects happen within a similar dose range.”

When looking at cancerous chemicals such as PCB’s, if 1 in a million people could be affected, the EPA will assess the chemical. But the EPA doesn’t require a response unless the risk gets above 1 in 10,000 people.

But FWP water pollution biologist Trevor Selch pointed out that the state of Montana uses a risk limit of 1 in 100,000 people, which is more protective than the EPA limit. So Selch said the EPA should use the cancer toxicity factor if it wants to be conservative. Others asked when the EPA intended to finish its reassessment of dioxin. Folland couldn’t answer.

Some advisory group members expressed concern about the agency taking soil samples from across the entire site and combining them to make a composite value, rather than considering the locations of higher chemical concentrations. The advisory group is worried because builders will eventually be working and people will be living on the site.

“EPA uses multiple lines of evidence to build up some certainty. But again, our job isn’t to remove all uncertainty. We have to at some point go forward,” said Allie Archer.

A longstanding concern has been that EPA employees have said they won’t take any action in regard to the high levels of chemicals in the Clark Fork River because a number of other wood processing plants are also contributing to the pollution. Therefore they can’t parse the contribution of the mill site from that of the rest of the facilities, so they can’t prove that Smurfit is contributing. 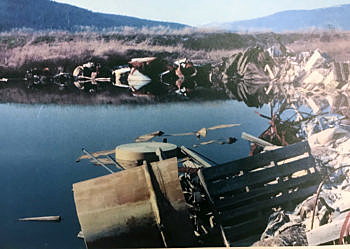 That’s problematic, because now the Department of Environmental Quality is testing for an additional industrial chemical, per- and polyfluorinated substances. PFAS are potentially dangerous, particularly now, because they may affect the immune system and reduce antibody responses to vaccines. Montana has adopted a standard for PFAS but the EPA still considers it an emerging contaminant.

DEQ epidemiologist Connie Garrett PFAS could be coming from Smurfit but also other Superfund sites upstream. County Water Quality District Supervisor Travis Ross wondered if the EPA would test for PFAS in the groundwater for the risk assessment.

“This is going to be an ongoing discussion with all interested parties on what we see in the river and how to look for them and where to sample. But we’re limited in the CERCLA-Smurfit realm on some of those items,” Archer said. “I’ll have to get back to you (on the groundwater).”

The EPA is taking comments on the Human Health Risk Assessment until Feb. 19