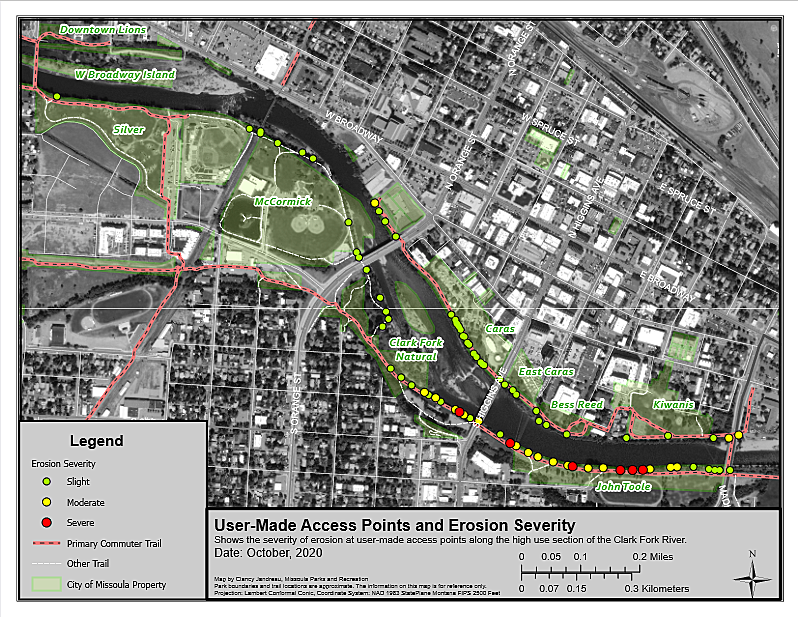 For years, the Clark Fork River through Missoula has seen continued use from swimmers, floaters, fly fishers and other forms of river recreation. But the rogue trails cut to water’s edge are taking a toll on water quality and habitat.

The health of the Clark Fork and its banks is a problem the city has been looking into since 2014, with a study examining the river corridor in the heart of Missoula.

On Wednesday, members of Missoula City Council in the Parks and Conservation Committee approved a $246,000 contract to build and develop plans to improve river access and restore the banks.

“I’m very supportive of this. I am an avid user of the river and it’s one of the unique gems that living in Missoula provides for us, but we definitely are loving our river to death,” said council member Stacie Anderson.

According to Nathan McLeod, Missoula parks and trails development specialist, better accessibility on the rivers could look like rock stairways. Another could restore beaches with established trails to them. Others would have ramps down to the river to make it more accessible for all abilities.

Accessible ramps to the river is something planned within the recently approved North Riverside and Parks Plan, as well for Caras Park.

“Whether you have a mobility impairment, a child or if you’re a senior, you can actually get down to the water and touch it. And that’s one thing that we’ve heard from people a lot throughout this process, that they really like being able to see the river but getting to the water can be difficult for a lot of folks, especially in Missoula, where the banks are really steep as they’re primarily levees,” McLeod said. “Providing universal access in particular locations is a really important goal for this project.”

McLeod estimated the constructions and improvements would begin in the summer of 2022, when the water is low. Before that, the selected team for the contract, RESPEC Company, LLC, will assess the area, provide landscape architecture, create designs, and manage the construction bidding process.

The voter-approved 2018 Open Space Bond would fund the agreement with RESPEC Company. Improving accessibility along rivers was one of the main focuses of the bond, wit $1.5 million earmarked for the development of sustainable river access and riparian restoration.

“I am really excited about this because it was a big part of the open space bond campaign, so I’m excited that we’re getting to this point with it to make this a reality for our community,” said council member Amber Sherrill, who campaigned for the 2018 bond.

Council member Sandra Vaseca, who opposed the open space bond, still voted for the use of funds with this project.

“As many of you know I’m not a big fan of the open space bonds, but the voters did speak and the river banks absolutely are eroding,” said Vasecka. “This is very necessary, and as a frequent user of the rivers myself, I think this is a great project.”

With the hardened river accessibility built along the river, McLeod said there is potential in the city saving money considering the erosion the city is currently facing, with some areas beginning to harm nearby infrastructure.

“I imagine that when these sites are developed the maintenance costs will actually go down, because right now the erosion is so severe in some areas that it is very difficult to deal with,” McLeod said. “So once the access sites are hardened, and the vegetation is restored, there shouldn’t be as much maintenance required.”

McLeod said the improvements to the river likely wouldn’t all be implemented in one year, with the plans instead taking a phased approach. A lot of their first few improvements would be dependent upon erosion severity, achievability and public feedback.

“I would love to say that we’re going to do the whole four miles of river at one go, but I don’t think that’s realistic funding wise. It’s going to be a pretty expensive project. Some of these sites are going to be more expensive than others,” McLeod said.

If the contract is to pass during the City Council meeting next Monday, the plans will have a “virtual open house” on Engage Missoula through the rest of March, where the city will seek public feedback to help inform their plans and designs.