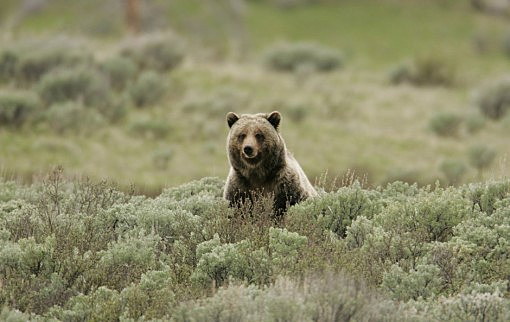 On Wednesday, after a five-year review, the U.S. Fish and Wildlife Service recommended that all grizzly bears in the northern Rockies remain listed as threatened.

Some were disappointed that the bears weren’t recommended for delisting while others wanted more work to be done.

The Center for Biological Diversity had sued the agency to spur the five-year status review after the agency failed to do anything since 2011. But the organization had been hoping for more, including consideration of additional locations for reintroduction, such as the Sierra Nevada range in California.

The lawsuit had also asked the U.S. Fish and Wildlife Service to update its 25-year recovery plan because some of the methods are out-of-date.

“It’s frustrating that federal officials failed to provide specific and updated recovery recommendations in this long-overdue analysis of the grizzly’s bear’s progress toward recovery,” said Andrea Zaccardi, Center for Biological Diversity senior attorney in a release. “Even after a decade of delay, the Service still failed to take a thoughtful look at what’s required for real grizzly recovery in the lower 48 states.”

Meanwhile, the Montana Stockgrowers Association wanted a delisting so the states could manage the bear. Some producers, particularly east of the Rocky Mountain Front, are now having to deal with grizzlies that were seldom seen a few decades ago.

However, some producers who participated in last year’s Grizzly Bear Advisory Council said the situation could be improved if the state had more bear managers, more funding resources for nonlethal tool such electrical fencing and carcass composting, and more ways to educate people on non-lethal methods.

The species has been listed as threatened since 1975 and the U.S. Fish and Wildlife Service said that all the work that’s been done so far to recover grizzly bear populations has helped keep the species’ status from worsening to an endangered listing.

The Montana Stockgrowers point to the two populations have increased to more healthy numbers, including the Yellowstone and Northern Continental Divide ecosystems. However, other populations are either doing poorly or are nonexistent, and the assessment determined these populations have little resiliency.

The U.S. Fish and Wildlife Service said its five-year status reviews must evaluate the entire species throughout its range, not just individual populations.

In the Cabinet-Yaak ecosystem, larger protected wilderness areas help the bear, but the assessment says road density on the other national forest land is still too high. It’s been shown that the more motorized access via more roads, the greater the odds of human-grizzly conflict, and it’s mostly the bears that lose.

Although connectivity between the various population areas is a critical part of the overall plan – a judge has even ordered the agency to consider that in its delisting considerations – the agency said it didn’t consider threats in these areas because they would only affect individual bears, not populations.

The USFWS requested information from scientific sources on Jan. 14 and received responses from the U.S. Forest Service and wildlife agencies in Washington and Idaho.  But under a new governor, Montana, which is home to more grizzlies than any state in the lower 48, didn’t respond.

Using the best available science, the peer-reviewed assessment evaluated the species’ current needs, conditions and threats and modeled future scenarios. It also included contributions from scientific experts as well as review by partners at federal, state and Tribal agencies.

The review recognized that considerable challenges remain to fully recover the grizzly bear in the lower 48 states. These include limited habitat connectivity, management of access by motorized vehicles, human-caused mortality and uncertainty surrounding future conservation efforts in some ecosystems.

For models of conditions 30 to 45 years in the future, they tested five scenarios – two pessimistic that predicted decreased conservation, two optimistic with more conservation, and one that made no change to current conditions.

With any decrease in conservation, which now appears to be a possibility in Montana, all populations but those in the Yellowstone and Northern Continental Divide ecosystems would probably fail to exist. Even those two ecosystems could be harmed if conservation was significantly reversed, especially if the effects of climate change worsen, including catastrophic wildfire and drought.

The assessment was finished before the Montana Legislature was very far into its session. Most of the anti-wildlife bills target wolves, which were protected until 10 years ago, but some of the potential changes, including snares and longer seasons for wolves and using hounds to hunt black bears, increase the threat to grizzly bears and would provide the U.S. Fish and Wildlife Service with more reason for concern, said Derek Goldman of the Endangered Species Coalition.

“Montana is showing right now through the Legislature that it’s not up to the task of managing grizzly bears for long-term conservation,” Goldman said.