The northside railyard skirting downtown Missoula has been in operation since the 19th century, serving as a major freight corridor for products heading east and west.

Over that time, fuel tanks have leaked and thousands of gallons of petroleum products have seeped into the ground, contaminating both the aquifer and surrounding soils. But the time for cleanup is near and after years of process, frustration is beginning to simmer.

The Montana Department of Environmental Quality is set to select its final remedy for the site once the public comment period closes on April 2. But officials from both the city and county of Missoula are asking the agency to extend the comment period, saying it was poorly publicized and failed to give interested parties a chance to weigh in on the cleanup and future uses of the railroad property.

That final remedy looks to clean the fueling and switching yard owned by Burlington Northern Santa Fe Railway to industrial and commercial standards only. The city and county, along with other Missoula organizations, want it cleaned to residential standards.

“This (remedy) seems to fall well short of the mark of the level of cleanup necessary to achieve the goals of the Downtown Master Plan for Missoula,” said Commissioner Dave Strohmaier. “This doesn’t seem dissimilar to all the haggling with White Pine Sash in years past over what level of cleanup would be appropriate.”

Missoula’s industrial roots have left their mark and as the city grows, as old industries fade and the demand for housing soars, repurposing the land for residential use is top of mind.

At one time, DEQ also proposed cleaning the White Pine Sash property to industrial and commercial standards, though a robust push from local officials and neighborhood groups eventually led to residential cleanup.

Now, the city and a private developer are set to break ground on a multi-million dollar housing project on nine acres of former White Pine property, including 70 housing units set aside as permanently affordable.

The city’s Downtown Master Plan eyes a similar use for the railroad’s fueling and switching yard. It’s there where DEQ is set to issue its final cleanup proposal, though it may not go as far as local officials and housing advocates want.

“Housing is a top priority of the city now, and we’re trying to do everything in our power to improve access to housing,” said city CAO Dale Bickell. “This area is right for residential housing, even though it’s not proposed for redevelopment today. The development occurring around it is residential.”

Todd Seib, an environmental health specialist for the water quality division at the City-County Health Department, said initial concerns over potential contamination in and around the fueling and switching yard surfaced in the 1980s.

The property was eventually listed as a state Superfund site in 1994.

“They (owners) were removing thousands of gallons of free product, or diesel fuel, from the aquifer throughout this process,” said Seib. “There’s been a lot of spills and leaking tanks. Removing diesel from 1985 to 2021, now we’re getting to the point of doing a more thorough cleanup.”

DEQ found the site to be contaminated with free product diesel, petroleum hydrocarbons, polycyclic aromatic hydrocarbons, volatile organic compounds and metals. Once the public comment period closes, whether it’s on April 2 or after an extension, the agency will select its final remedy.

According to the agency, it must consider “the present and reasonably anticipated future uses” of the facility. That currently doesn’t include residential uses.

“The preferred remedy allows the onsite property to continue to be used for the reasonably anticipated future land use (commercial/industrial), with minimal disturbance to existing operations,” the agency wrote. “The preferred remedy is expected to address contamination within a reasonable time frame and is anticipated to be as or more effective than other options or combinations of options considered, despite costing less.”

According to the city and county, in reaching its preferred remedy, the agency was supposed to include consultation with local officials to discuss not only the site’s past uses, but also its potential future uses.

Those future uses have been included in the last two iterations of the Downtown Master Plan, which lays out a vision for potential uses of the property.

“It is undesirable to have locomotive fueling in the heart of downtown,” the new plan states. “While the adjacent rail through-line and historic passenger station will continue to serve the community well into the future, the switching yard presents an opportunity for redevelopment.” 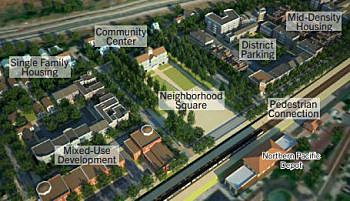 The plan visualizes an extension of downtown Missoula, one that transforms the fueling and switching yard into a “vibrant, walkable, mixed-use neighborhood.” As a result, the city is asking DEQ to extend its comment period and consider city plans for the railroad district.

Those plans were created after extensive public input.

“We will be providing them (DEQ) building permit data showing that over the last five years, quite a bit of residential development has been occurring in this area,” Bickell said. “Substantial efforts have gone into planning this area. We feel they downplayed the ability for the implementation of the Downtown Master Plan site because it’s complicated.”

But the city has tackled other contaminated sites once deemed to be “complicated.” Environmental cleanup of the former Montana Rail Link property donated to the city several years ago continues, and the city is set to begin planning for a mixed-use redevelopment, including residential and commercial uses.

A contaminated lot on Front Street was also cleaned to residential standards, clearing the way for Lee Gordon Place, an affordable housing project. The Riverfront Triangle also has been cleaned for future uses, and the White Pine Sash property will see development activity this summer after its residential-level cleanup.

“Just because it’s complicated, they shouldn’t dismiss the ability of that planning and implementation,” Bickell said.