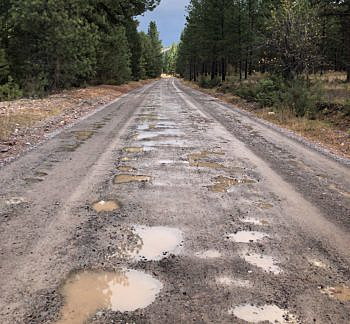 On Friday, public-lands advocates watched the Montana House session closely, hoping a bill intended to open old roads through public and private lands was truly dead. It was.

On Thursday, House Bill 418 died on the House floor, but the vote was as close as it could get: 50-50. All it took was one more vote to pass.

Since Republican legislators have brought several bills back to life after they’ve been tabled in committee this session, public-lands advocates expected the bill’s sponsor, Rep. Steve Gunderson, R-Libby, to make a motion Friday for the House to reconsider the bill. But when the Speaker asked for motions, Gunderson didn’t rise.

Gunderson might have been working since yesterday to pull more representatives to his side. Maybe he found he didn’t have the votes, because Montana Wilderness Association lobbyist Noah Marion said he thinks he convinced a few more legislators to vote no in the past 24 hours.

“I think there were three parts (that influenced legislators),” Marion said Friday. “They’re not interested in setting off a morass of litigation on both sides. Some of them were worried about public lands, but I’d say the majority of them are worried about protecting public land rights. The third piece is the cost to counties to manage these roads if they were transferred back to the counties.”

HB 418 reaches back into the late 19th century to exploit a statute that would allow people to sue the federal government to open any roads on federal lands, including national parks and wilderness areas. The 1866 Mining Law granted a right-of-way “for the construction of highways over public lands not reserve for public uses,” and it later became Reserve Statute 2477. The statute was repealed in 1976 but existing rights-of-way remained.

During the bill’s Feb. 24 hearing in the House Natural Resources committee, Gunderson said any road built on federal land prior to 1910 should be a county road because federal agencies didn’t exist when the roads were created and therefore shouldn’t own them.

In Lincoln County, which is about 80% public land, Gunderson said he is helping small miners fight the Forest Service to open a road so they can access mining claims in grizzly bear habitat. He said Lincoln County wants every road it can get.

Over in Flathead County, a few private landowners with century-old inholdings in Glacier National Park have trouble reaching their property when the park is closed in winter, Gunderson said.

Gunderson said U.S. Sen. Steve Daines and the Glacier landowners asked him to intervene. The National Park Service has asked the landowners to show proof of any easement through the park, but no easement exists.

“This bill is long past its time,” Gunderson said during the bill’s Feb. 24 hearing in the House Natural Resources committee. “There exists private lands and mining claims on the periphery and included within these lands. The states of Utah and Nevada most notably have fought with the federal government to memorialize these county roads.”

No one spoke in favor of the bill. Six people opposed the bill, including representatives of Montana Trout Unlimited and Montana Conservation Voters.

Marion called HB 418 “kind of a wonky bill” due to its dependence on ancient law. Many roads have been closed so long that they’re now just two-track trails or cow paths.

“It’s a real threat – it would enable people to bring suits to open up roads through protected public lands, through national parks, through wilderness areas,” Marion said during a Thursday Zoom call. “It also seriously threatens private property because a lot of these old roads that are not used and have been abandoned for good reason go through private property too.”