A warm, very dry March has put parts of Montana a little behind where they should be for winter snowpack. Combine that with increasing drought and rivers may flow lower this summer.

A majority of Montana’s mountains still have close to their normal amounts of snow for April 1, but only the Bitterroot River basin and the Boulder River basin south of Big Timber have somewhat more than average amounts, according to the most recent U.S. Natural Resources Conservation Service Water Supply Report.

In addition, the mountains of the Kootenai, Sun-Teton-Marias, and Milk river basins in northern Montana and the Madison River in the south now have less than 90% of their average snowpack. The Flathead basin is also poised to drop below that 90% level.

Compare that to a month ago when a swath covering the Bitterroot, Upper Clark Fork and Helena Valley easily had more than 110% of its snowpack and only the Kootenai and Madison had less than 90%.

The unusually warm, dry March we just had is reason the snowpack is dropping.

Similar to January, March was significantly warmer than normal across the state. The hottest area was far northeastern Montana, which had an average monthly temperature that was 7 degrees higher than normal.

The state got less warm the farther southwest you go but many mountain ranges, including the Sapphire, Bitterroot and Gallatin, were still 2 to 3 degrees warmer than they should have been. Only a few lower valleys, including around Three Forks, Dillon and Flathead Lake saw normal temperatures. 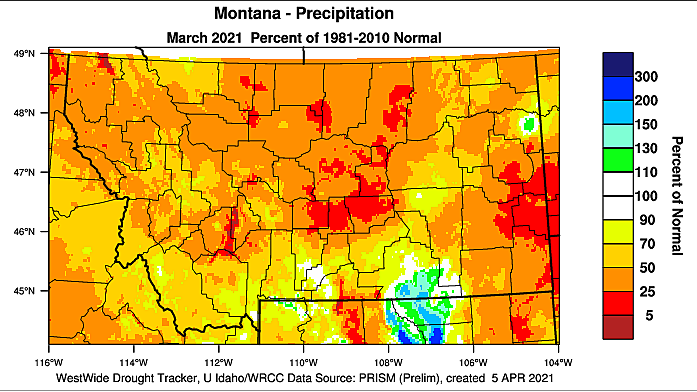 Over much of the state, precipitation was only 50% of normal or less, according to the University of Idaho Westside Drought Tracker. Regions of central and eastern Montana received less that 25% of March’s normal precipitation. Only small areas around the Bighorn and Boulder rivers in southern Montana and one spot north of Sidney received normal amounts of precipitation.

The Bitterroot and Flathead basins received only about half of their normal precipitation for the month while most of the Clark Fork basin received even less.

As a result, a little more of the state is experiencing severe or extreme drought.

Western Montana north of Ravalli County is doing okay except for the Kootenia basin in the far northwest. But 85% of the state is abnormally dry or worse. The northeastern third of the state is in moderate drought. The far eastern edge is in severe drought with a blob of extreme drought north of Sidney at the confluence of the Missouri and Yellowstone rivers.

The long-range outlook for April through June doesn’t give much reason to hope things will improve.

During the March 26 Governor’s Drought and Water Supply Advisory Committee meeting, Michael Downey of the state Department of Natural Resources and Conservation said the situation was worrisome.

“I don’t know that we’ve had a end of March and had the map look like this — maybe ever,” Downey said.

The National Weather Service has already issued two high-fire-danger warnings since the beginning of March. Over the weekend, Helena had a small wildfire develop from a controlled burn while grassfires burned 39 square miles of the Blackfeet Reservation a week ago.

Meanwhile in North Dakota near the Montana border, which is also in drought, a wildfire started Sunday in Theodore Roosevelt National Park, which burned about 5 square miles. Wildfires have burned more than nearly 47 square miles in North Dakota already this spring.

Dry conditions and lower snowpack mean rivers could run lower than normal depending on location. With their lower snowpack levels, rivers in the Kootenai, Sun-Teton-Marias and Madison basins will likely have lower than average flows through July if April doesn’t bring more snow to the mountains. Other rivers could end up with lower flows too if warm temperatures cause snowpack to dwindle early.